Back on the Trent & Mersey Canal

Thursday 14th September
Last Sunday (10th)we left Kinver quite early and I walked ahead with Jaz to set the first lock, we pulled over after the lock at the services to get rid of some rubbish etc and then I walked on with Jaz to the next lock and as I was nearing the lock there was a woman just about to fill the lock when she saw me with my windlass, Kev then came on the boat and was able to go straight in. We saw more boats on that Sunday morning than we had seen in a few days! When we got to the Bratch locks I got off the boat and went ahead with the windlass to let the lockie know we were there. He said we could go straight into the bottom lock, it was very quiet at the Bratch locks, usually there are a few boats coming and going and people walking etc but that day there was only a couple of people about watching us come up the locks. It was quite a miserable day and after we had got up through the locks we moored on the visitor moorings.
On Monday morning it started to rain as we left our mooring, I was walking with Jaz to set the first lock while Kev followed on the boat, Jaz hates the rain and all she wanted to do was get back on board! By the time Kev had got up in the lock it stopped raining so Jaz was happy to carry on with her morning walk! 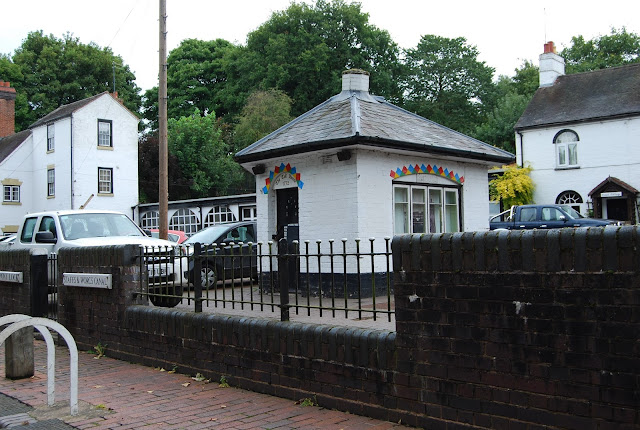 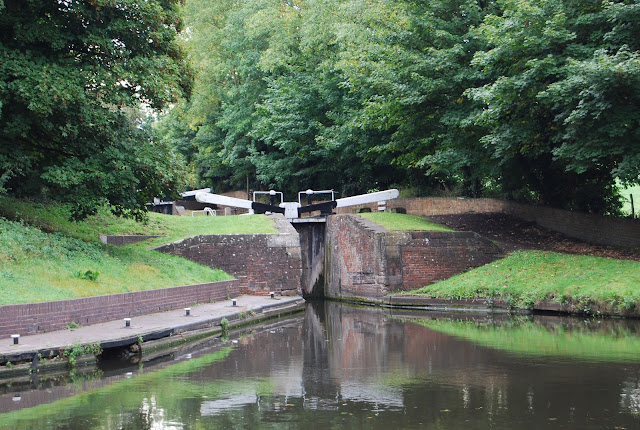 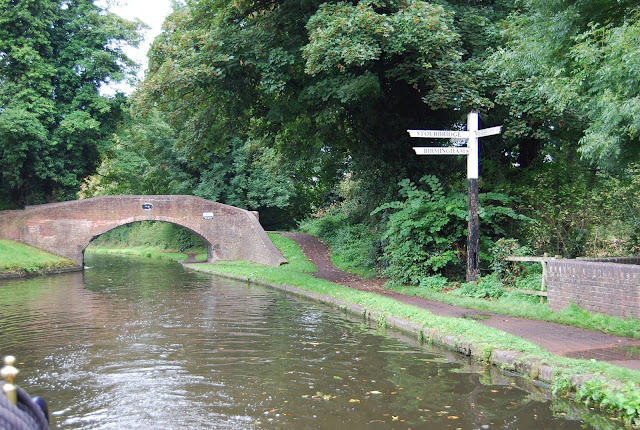 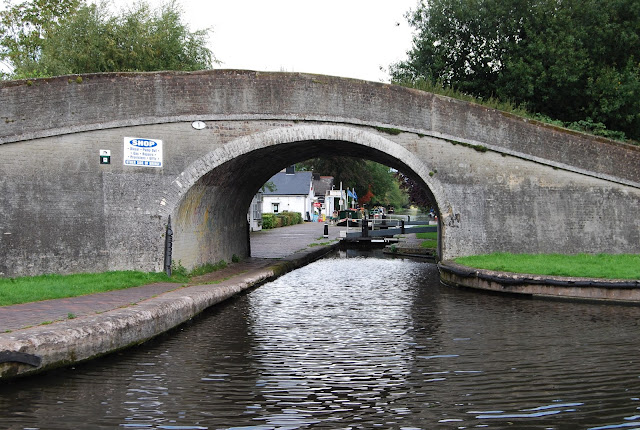 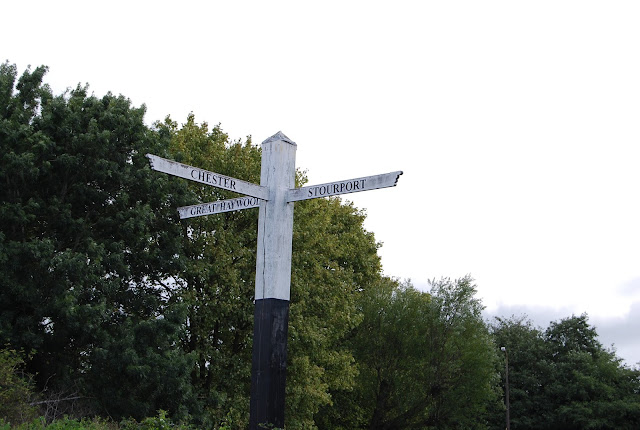 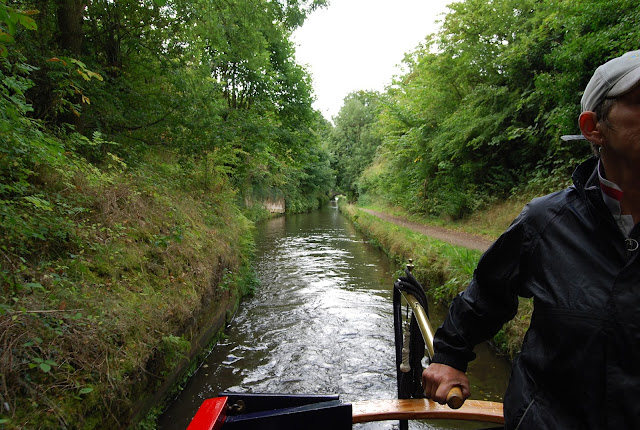 After Autherley junction we went through the narrow cutting! 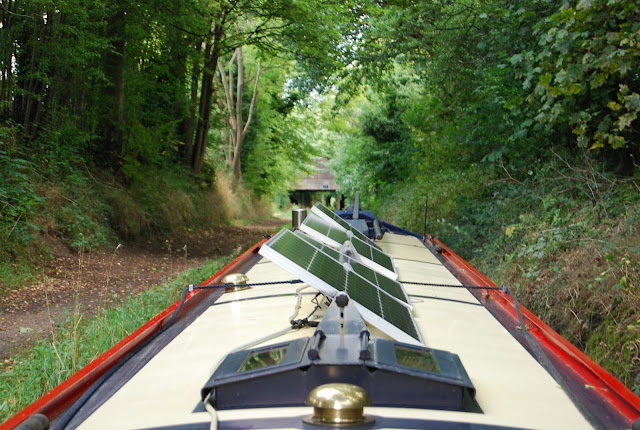 There was a boat waiting at the end of the cutting to come through.

We wanted to get to Cross Green that day and we managed to get moored there about lunchtime close to the Fox & Anchor pub. The reason we wanted to get moored there was that Kev's friend Nigel was coming to us there, he arrived about 5pm and we had some tea and later Kev & Nigel went to the pub for a couple of beers while I was boring and stayed to watch Emmerdale, (yes sad I know). Nigel stayed the night and after a cooked brekkie on Tuesday morning Kev went with Nigel to Hatherton marina to see the progress of Nigel's new boat in build. I took Jaz for a walk and then I let go of the mooring ropes and I set off to pick Kev up at Hatherton. As I was approaching the junction at Hatherton I rang Kev to tell him where I was and so I turned right towards the locks below the marina where both Kev & Nigel were waiting, I had to pick Kev up there as there is no way he could otherwise get picked up. Once he was on board I reversed the boat back to the junction and we turned to head for Penkridge where we moored. We wanted to get there before the bad winds which had been reported, headed our way, we were moored on the visitor moorings before Penkridge lock. Well the winds didn't come to anything much and we had a few gusts and an odd shower but that was that.
Yesterday morning about 10.30am  we moved across to the water point before the lock and filled with water. Once the tank was full I walked over to fill the lock ready for Kev to bring the boat into, we had an uneventful cruise and only passed a few boats along the way and when we got through Acton bridge we moored on a really quiet spot.

This morning it had been raining before we left so the towpath was quite wet, we were up early as usual and as there were no other boats moored  with us we were able to start the engine and put a quick wash on before we left. As we were getting ready to leave a boat towing a butty came passed us going the same direction as us and also there was a boat moored further along from us also going the same way who had decided to leave at the same time! We stayed put and and a cuppa to give them time to get down the first lock for today, Deptmore lock and so I walked Jaz to the lock leaving Kev once again to follow on the boat. By the time we were at Deptmore lock the boat & butty had gone down and a boat was coming up, the other boat that had set off before us was the Fudge boat and they told me they were stopping just before Radford bridge. So at least we would only have the boat & butty ahead of us! 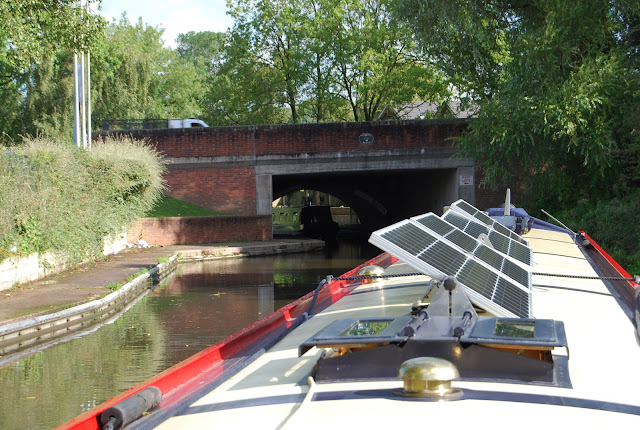 Waiting for a boat to come through Radford Bridge 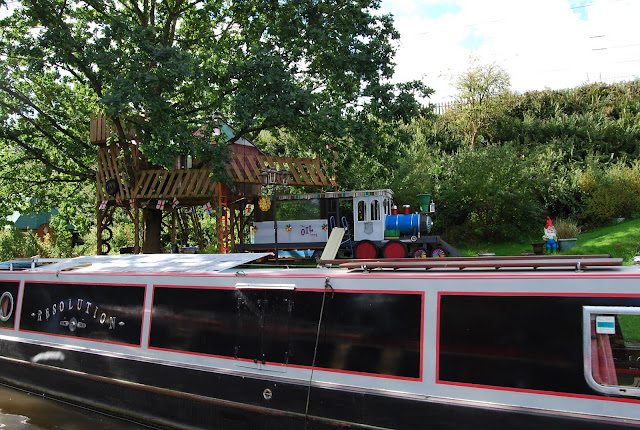 Passed this boat with it's lovely little play area, man made! 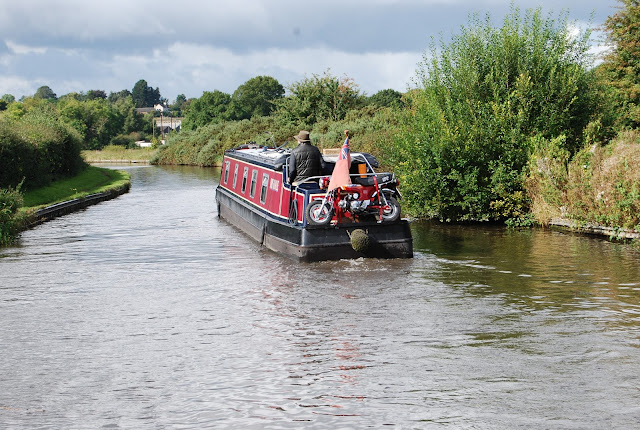 This boat passed just before the river Sow Aqueduct, super little motorbike on board! 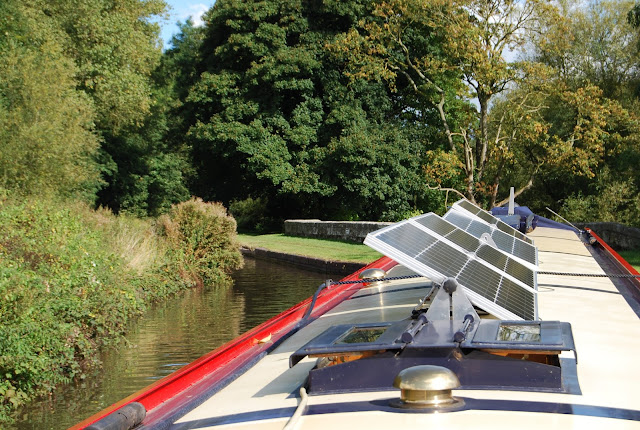 About to cross river Sow aqueduct
A quick hello to Nb Klara, we passed them shortly before we got  to the aqueduct, they said they read the blog, thanks to you both. 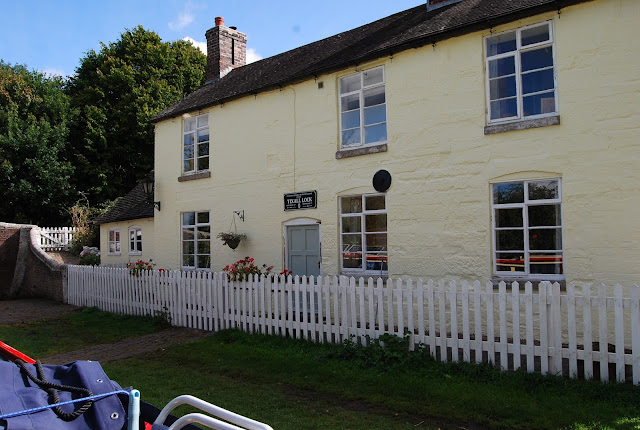 Tixall lock, & the cottage alongside looking very pretty.
After we had got down Tixall lock Kev walked Jaz for a while and I followed on the boat and then picked them both up at Swivel bridge. We stopped briefly at the aqueduct close to Gt Haywood junction so Kev could pull a branch off the bow of the boat and the we carried on and turned right at the junction and went down Gt Haywood lock and we are now moored close to Shugborough Hall.
Posted by Unknown at 06:34