A good day for washing.

Thursday 28th June
On Tuesday morning we left our mooring and went a short distance to moor at Sutton Road bridge so Kev should go to Ventura Park shops, we needed a new charger cable for my iPad and also a few bits of groceries fro Asda, I cleaned the windows while he was gone and when he returned we had a cuppa the set off once again. 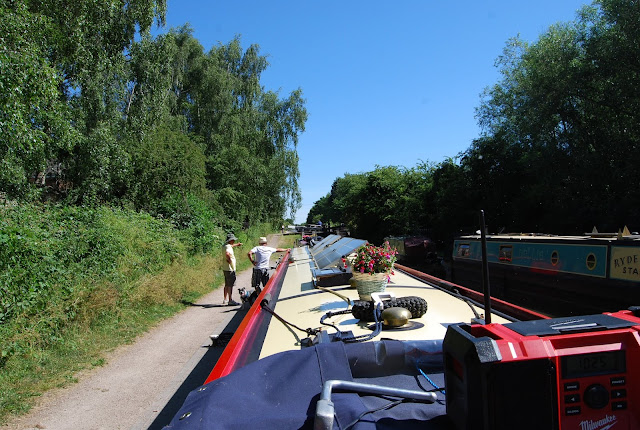 Waiting at Glascote locks.
When we arrived at the 2 locks at Glascote there was a couple of boats ahead of us going up the locks. Once we were up and out of the locks Kev walked to get us both an ice cream from the Co-op at bridge 73 and I picked him up there. It was another very warm day so the ice creams were very welcomed. We pulled over at the services at bridge 48 and filled with water etc and then we headed to the bottom lock at the Atherstone flight and we went up the first 2 locks and moored for the day &  sat in the brilliant sunshine & then we had a bbq.
Yesterday morning we wanted to get away fairly early while it was cool, so about 7.15am we were about to let go when a boat came from behind us so we waited and let them by and they went into the lock which was ready for them. Kev then went to help them up the lock and I waited for him to empty it again for me. The boat that was now ahead of us did open the paddles for us at each lock they left so by the time I was ready to leave a lock the next one was ready. By the time we were at the top lock the volunteer lockies were there. As we left the top locks there were several boats coming to the locks, Kev had got Jaz off and walked her for a bit then I pulled over to get them both back on. When we got to Starline boats at Boot Wharf we pulled in for diesel and filled up. Not a very good price 82pence per litre!
We were going to moor at Hawkesbury Junction but when we went through Sutton Stop lock the moorings were full so we carried on and finally moored at Ansty opposite the Rose & Castle pub.
This morning Kev was up at 5.15am and while I was still in bed he washed the boat on the towpath side. As the man on the boat  moored behind us had gone to work we started the engine and I put a wash on and after we had breakfast and the washer was finished we were ready to leave, once again Kev  let the ropes go & pushed the bow off and he walked with Jaz  while I followed on the boat, after about a mile or so I picked them both up and we carried on until we got to the moorings at All Oaks Wood where a boat was just leaving so we were able to get on his mooring. I put another wash on and hung the first wash I had  done earlier onto my whirly gig. We will have a walk later with Jaz into Brinklow for a beer.