Brazil & England together for the weekend!

My brother & his Brazilian partner Marcella & their daughter Beatriz have come over to the UK to stay for a few weeks and are staying with my mother & my sister Sam. Kev is away in Singapore & is not home until next week & then my brother & family will be going home to Brazil a couple of days later. I wanted to take them on the boat with us but as Kev isn't home I decided to let them come this weekend & they brought my sister Sam too.
I got to Barton Turns Marina on Friday morning and I got the fridge on etc before my brother came just after lunch, it was glorious day and was very warm. Once they had all got unpacked we had a walk to the Waterfront pub for a bite to eat & a cold beer of course! I took them to the lock opposite the The Barton Turns pub & yes another cold beer, but I wanted to show them what to do at a lock as Kev wasn't with us I would be taking the boat into the locks so they would have to work them & luckily there was a single handed man just coming up into the lock so I offered for us to do the lock for him so John & the rest of the family could see what to do, and then in the evening we all went to the Waterfront pub  for something to eat. Marcella, Sam & Beatriz
Saturday morning and to my surprise everybody was up at the crack of dawn!! Which is unusual for Marcella & Beatriz, anyway once  they were all fed and watered and dressed we left the  marina and headed to the first lock of the day which was the one I had shown them & they managed very well.
I had decided not to go too far but thought we would get to Willington and moor there overnight and return to the marina Sunday. 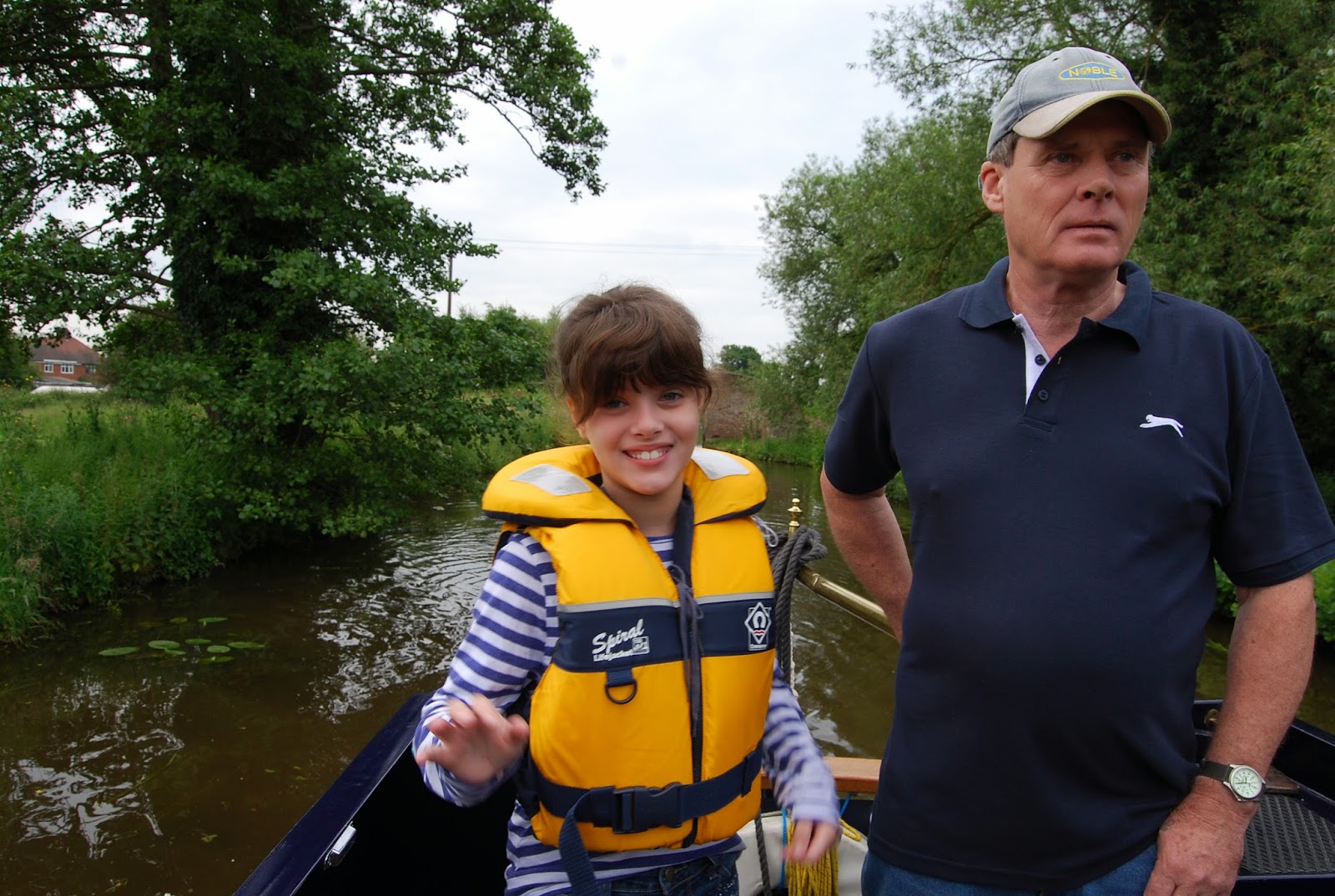 John at the tiller helped by Beatriz 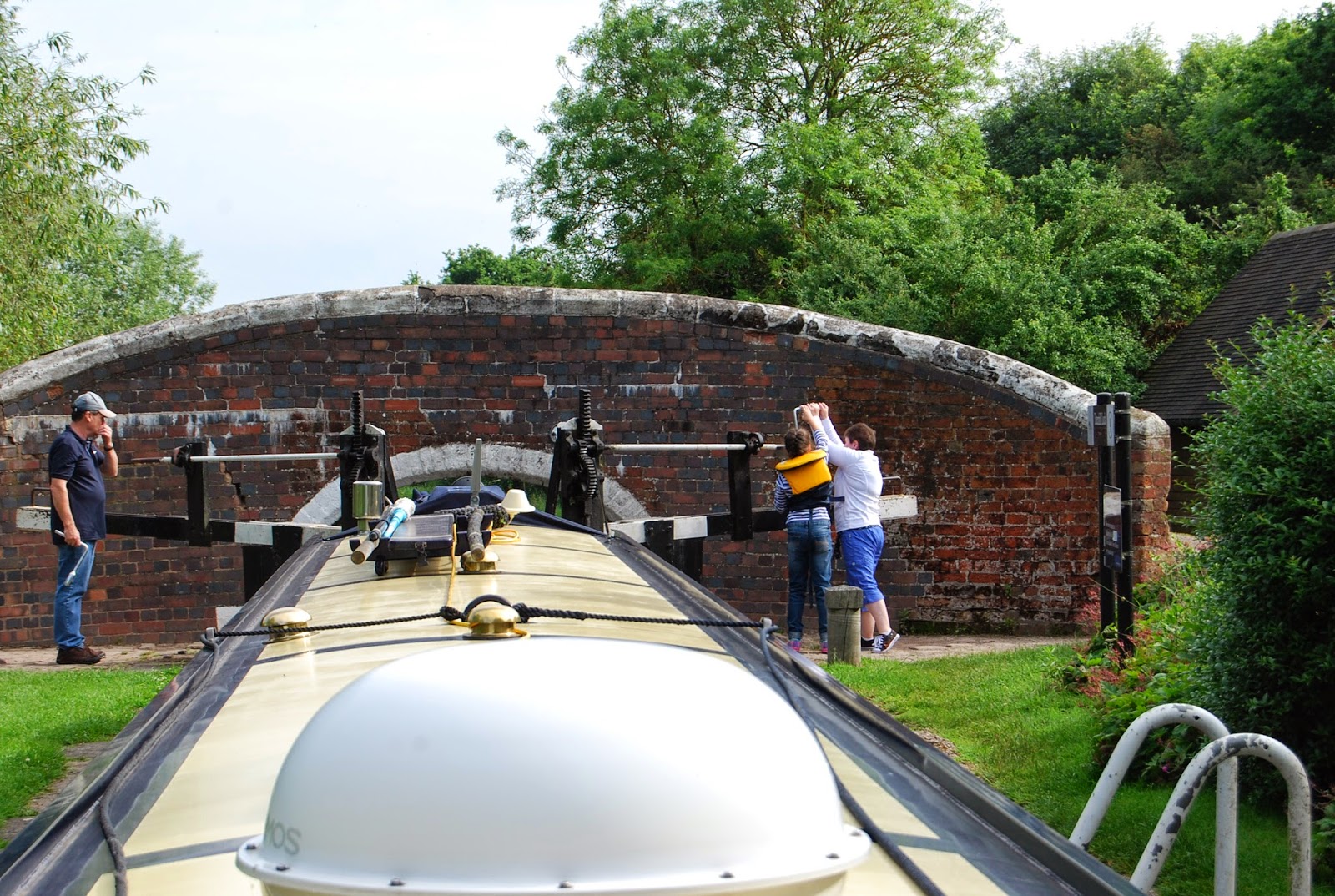 3 of my crew members working but hang on where is Marcella? 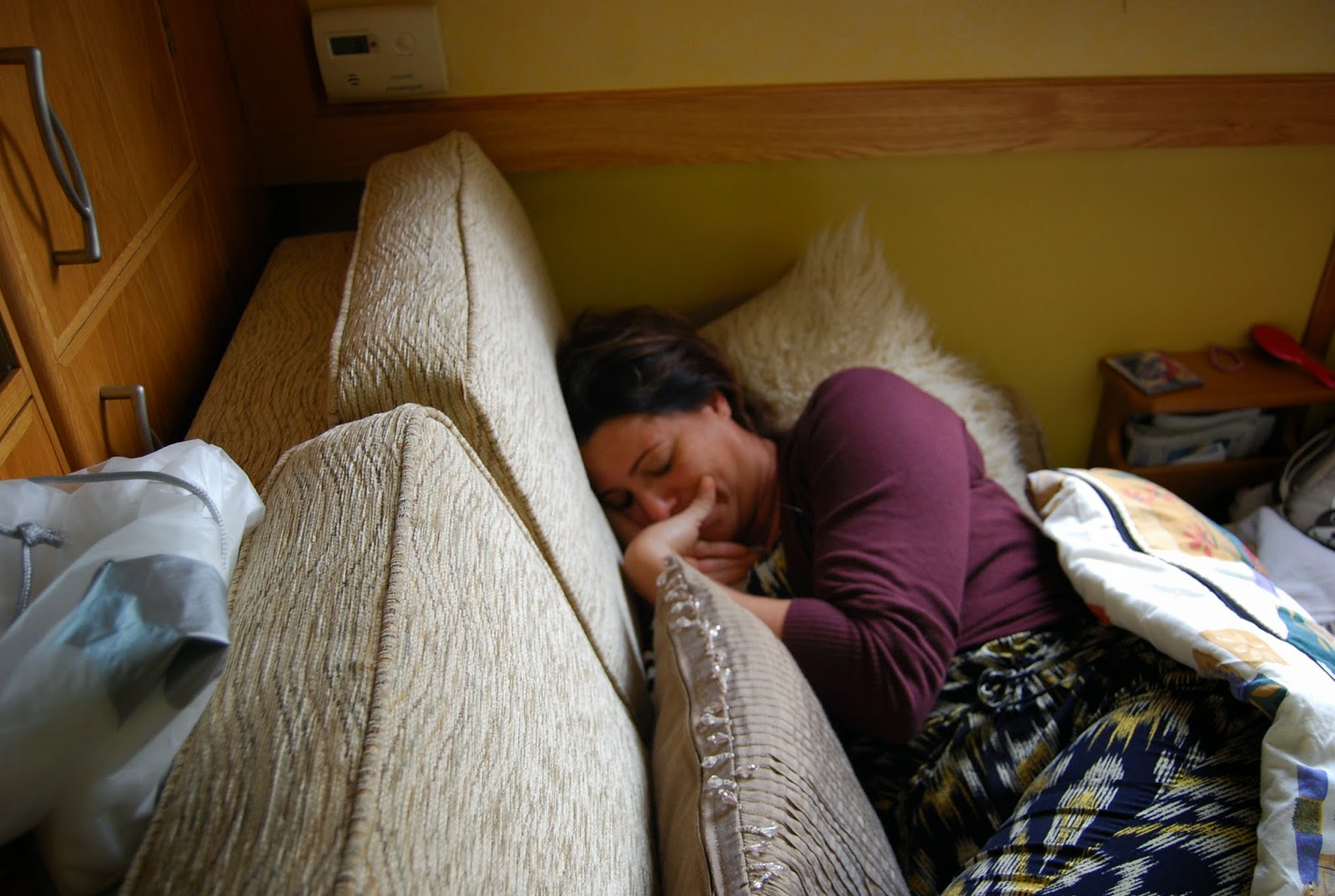 There she is it was all too much for her!! Lol 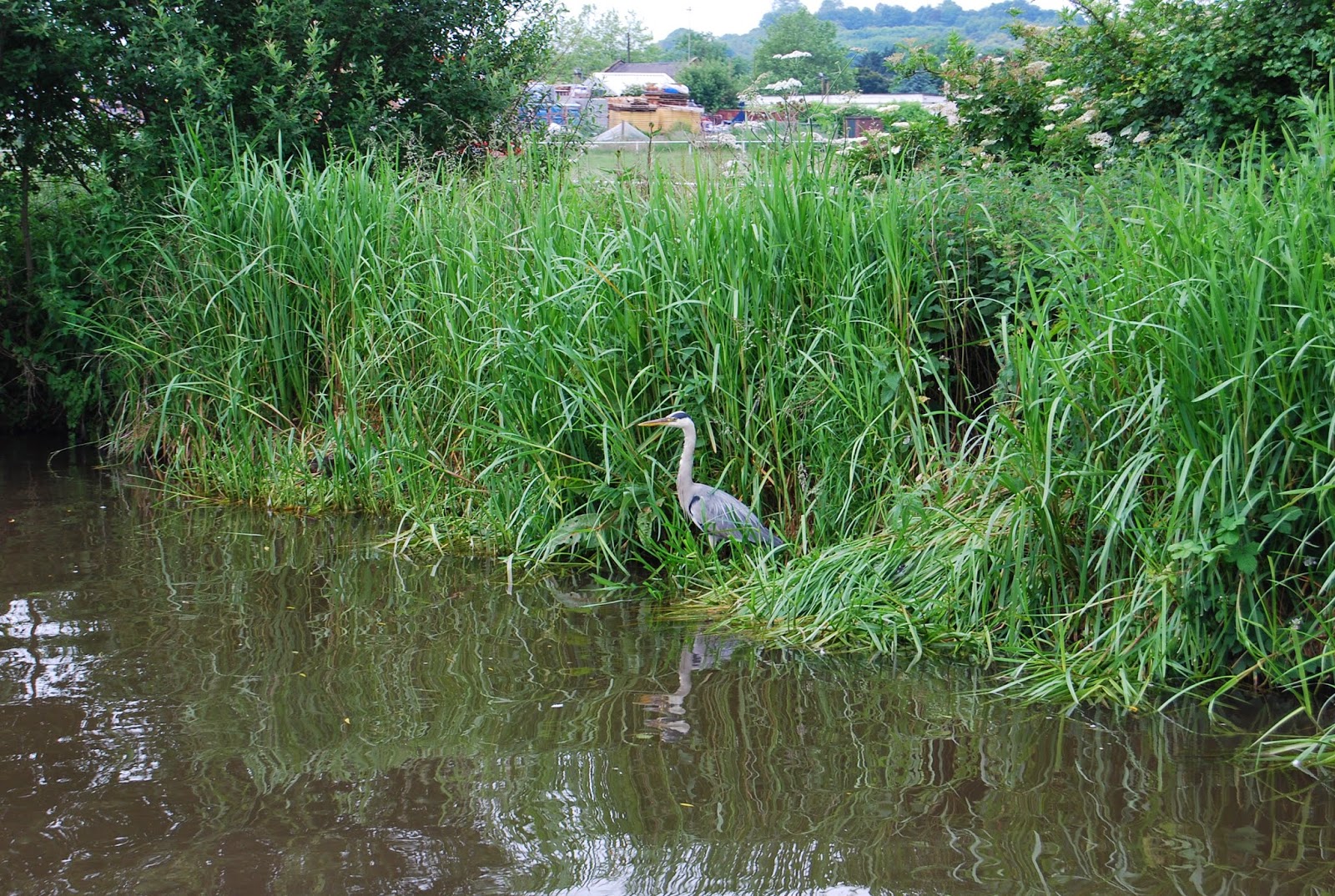 This Heron was so still I thought it was an ornament! 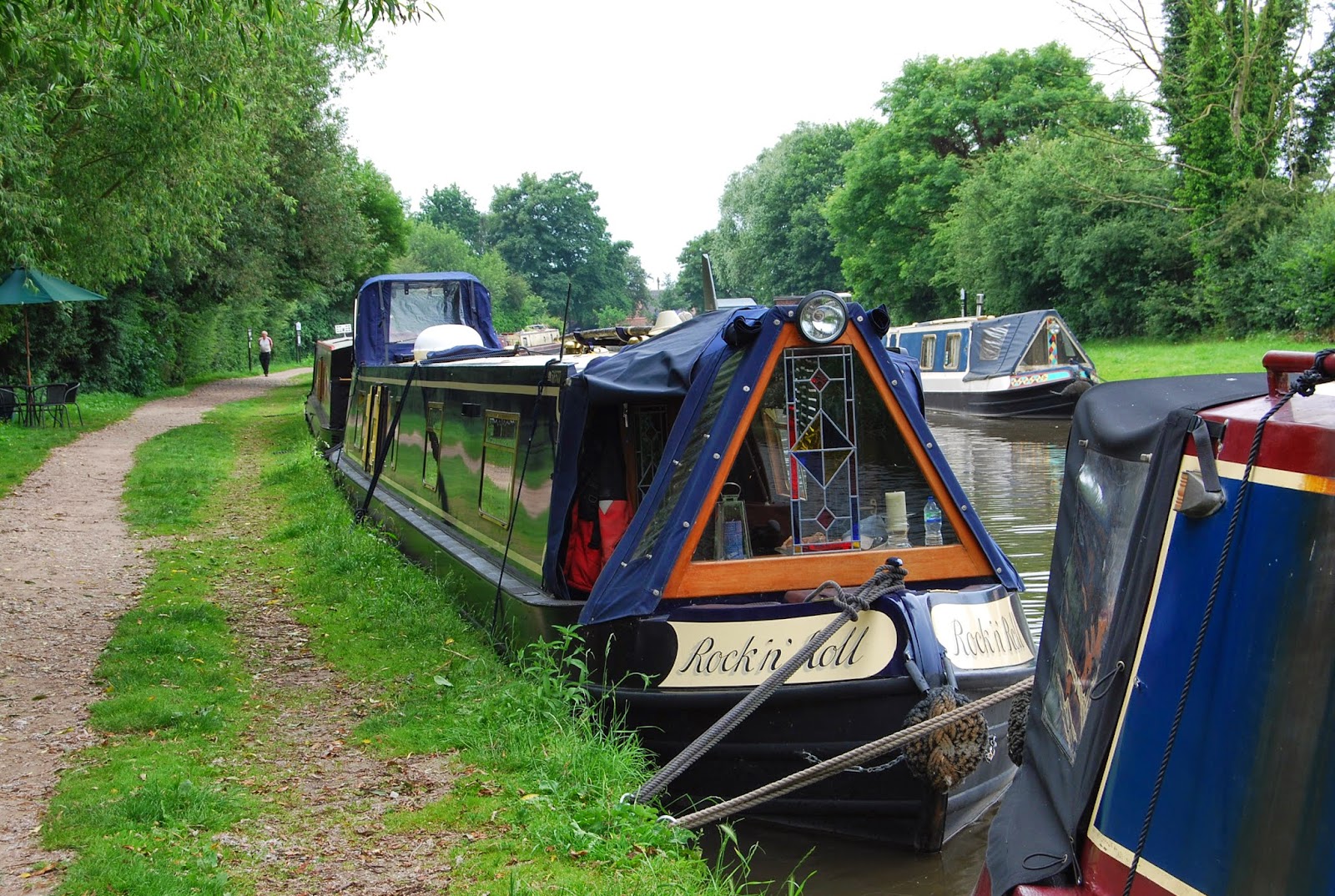 We got to Willington and it was very busy I managed to get moored but had to go passed the winding hole as the moorings outside the Green Dragon pub were full, we had a walk to the pub only to find that there was an annual Raft Race going on in the river & that the only food they had to offer were hog roast, burgers & hotdogs and although that was fine for John & myself it didn't appeal to Marcella & Beatriz so we had a beer then popped to the coop shop then went back to the boat and had a bite to eat. We had passed a pub on the way called "The Millhouse " so after we had eaten we  decided to head back for the night  and moore there  so we set off to turn round I turned the boat at the entrance to Mercia Marina (naughty) and we got to the Millhouse pub at bridge 29a and there was a boat already moored there so we pulled ahead of him and moored. 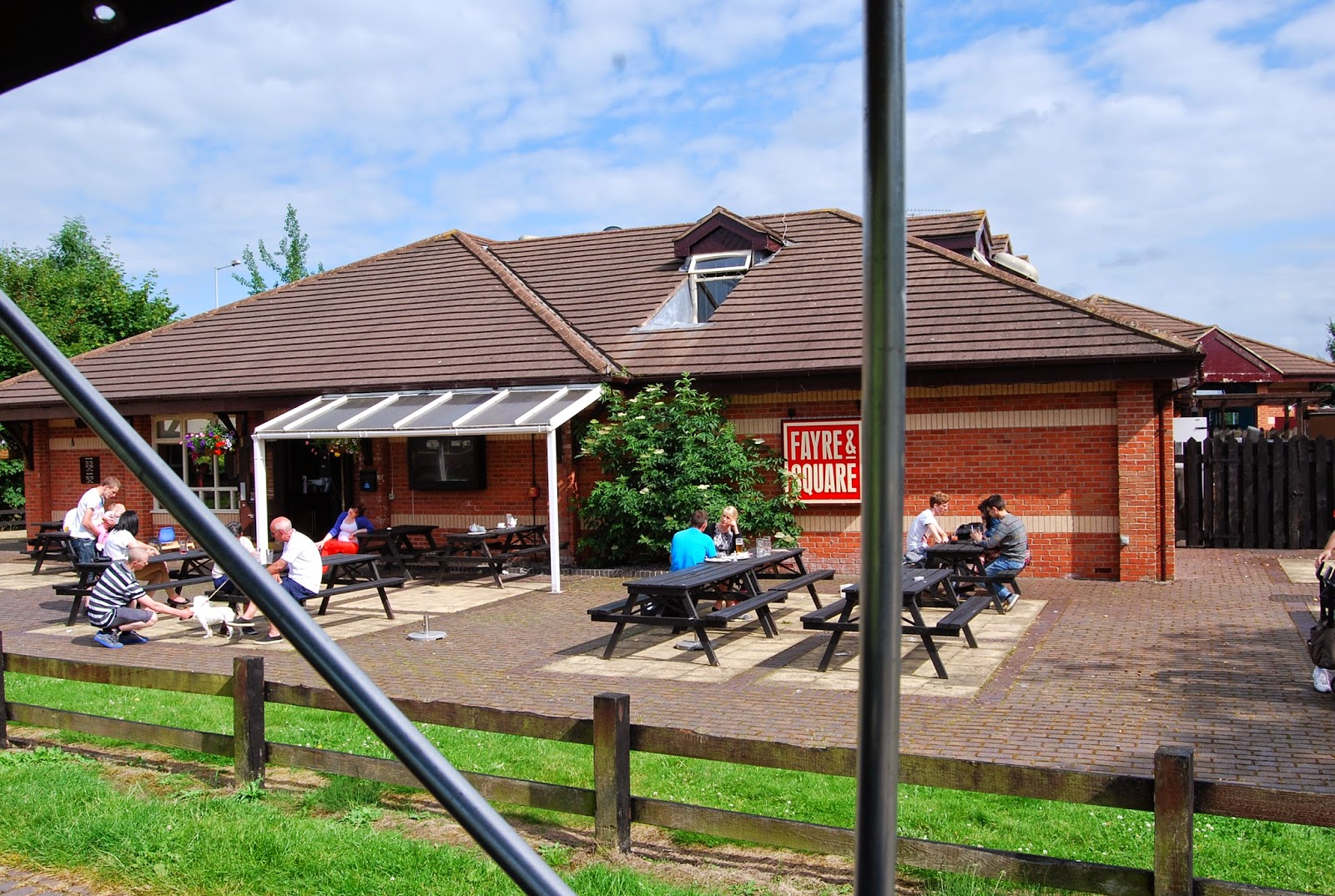 We went for something to eat in the evening they had all sorts of offers on for food like 2meals for £10 and I must say I have been to several good pubs with these sort of offers on but this one wasn't one of them! I had the worst chilli ever, although John had a steak, Sam had the gammon and Marcella had a chicken salad and they were not too bad but hey what can you do wrong with a salad!

Yesterday morning I was up and about early as usual and my sister wasn't far behind me, the rest of them were up about 10am and we left the mooring around lunchtime to head back to Barton Turns Marina, there were plenty of boats about but not too busy that we had to queue at the locks. Once we were back and tied up on the berth John & the others had decided to leave to go home. John was going to stay overnight and got to Alton Towers and get a room there too but he went online and the price for a hotel room and the day on the rides was £800!! I am not sure if that was for 2 nights but still that is disgusting he said he can fly to Brazil for that! Anyway they all packed up and left at 3.50pm and I stayed the night to tidy up etc and I left this morning and am back home now. It was a lovely couple of days and we all had a good time.