Tuesday15th May
I was up early as usual yesterday morning but I could hear Buster crying as I walked downstairs, his health has been gradually deteriorating over the last few weeks. he was struggling to get up and wasn't eating properly, he went to go for a walk but then as you got out of the gate he only went virtually yards then would stop and turn to come home. His backbone was quite raised and he was losing weight it was very sad to watch him in the garden as he would stand with his head downwards staring into nothing. Anyway yesterday morning he had messed in the kitchen which is something he has never ever done, I had to ring the vet and took him to see what he thought. The vet said 14years is a good age for a Staffie and examined him he listened to his heart and said it was fluctuating, He examined him and said he could give him some medication but it probably would only last for a few days  and he would deteriorate more I knew the inevitable outcome of this visit! I couldn't stop crying  the vet said it was time to let him go and so with great sadness I agreed to let him put him to sleep. 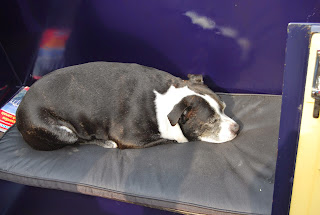