We left Fradley yesterday morning once again about 8.30am, and once again it was very cloudy & quite cold. I went to open the swing bridge for Kev, you don't need a key yet so it is quick to open & close with no messing, once Kev was through & I had closed the swing bridge I went to set the lock for him so it was a right turn for Kev but he had to wait for me to get the lock full before we could head back down through Fradley onto Trent & Mersey Canal once again. 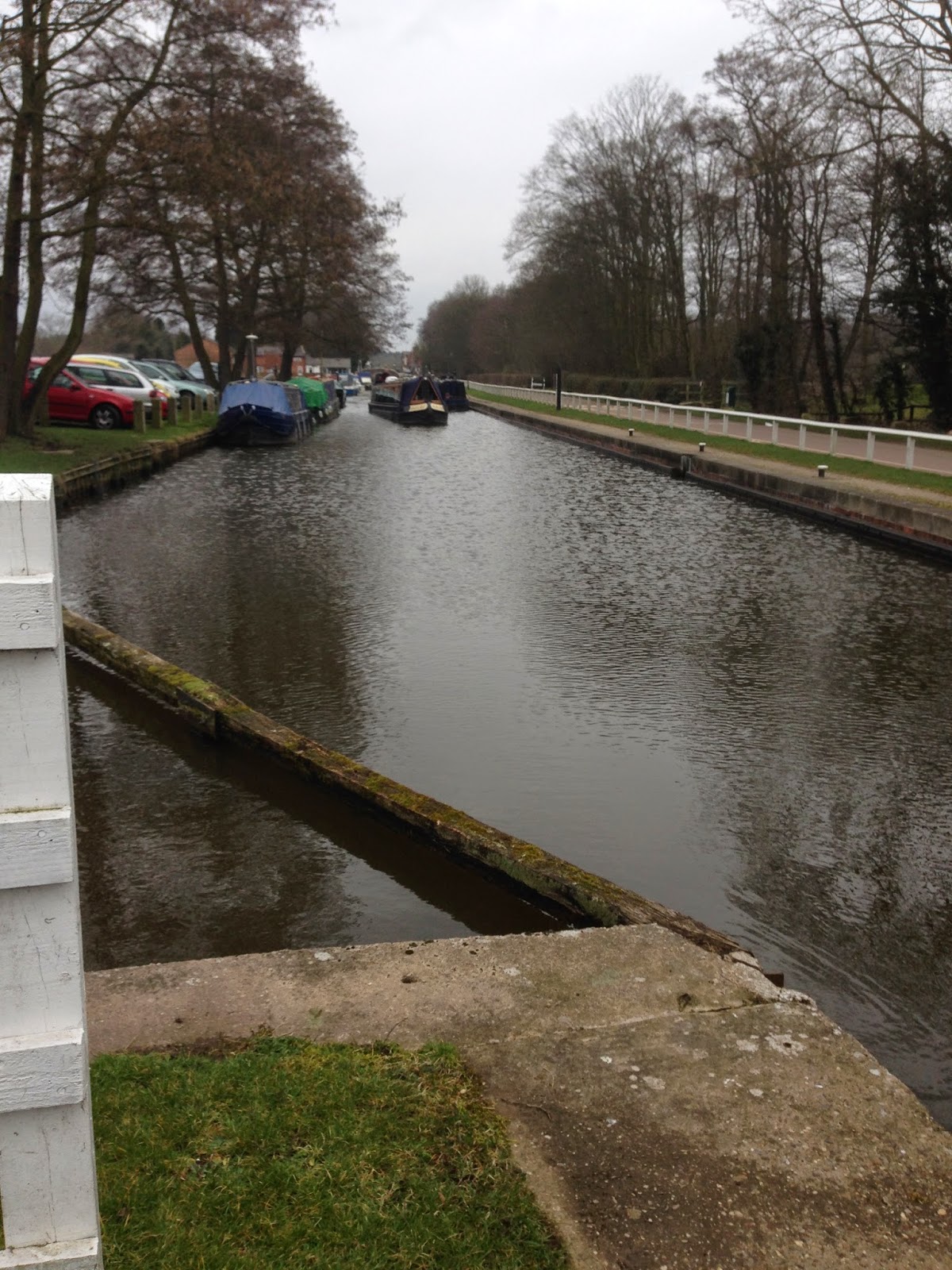 Kev approaching the next lock at Fradley
When we were approaching Common Lock there was a boat just leaving so we could go straight in there was a man at the lock who was on another boat waiting to come up & he was with the boat that had just left so that was good for us, at last a lock in our favour! Then as we got to Alrewas a man sat on the bench saw us coming and kindly opened the lock gate, it was good as there was a bit of a breeze so we didn't have to hang about. We moored for a late cooked breakfast on the moorings before Alrewas Lock and once we had took Buster for a short walk and cleared the pots etc away I went unto the lock and filled it for Kev, and then we were on the river which was in green so safe to proceed but was flowing quite fast so it didn't take long to get to Wychnor bridge lock. When we got to Branston Water park we decided to get moored for the day so went through Branston Bridge where we moored, I have to say though that there is a lot of geese about here & so there is plenty of goose waste on the edge of the canal so maybe we should have moored before the bridge as there didn't seem to be any droppings there! It is awful getting it on your footwear as it is hard to avoid it.
This morning was raining first thing but stopped as we were getting ready to leave Branston and so I took Buster with me to get Branston Lock ready while Kev slipped our mooring and by the time he got to Branston Lock I had filled it and opened the top gate for him. 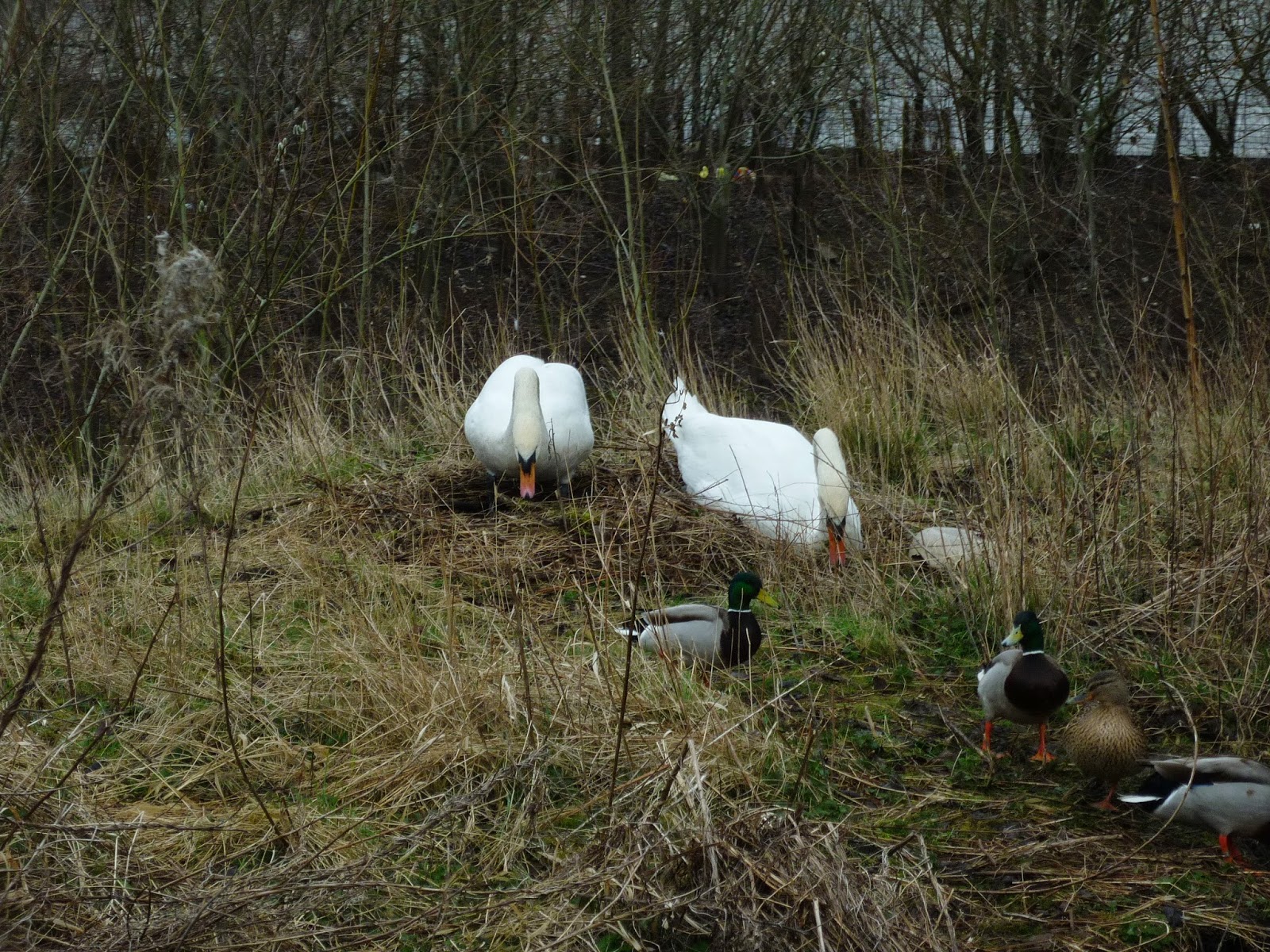 As we were passing the brewery distribution depot we passed this pair of swans busy getting their nest ready, they had a few helpers!
Then as we were approaching Shobnall Marina there was a boat just coming towards us through the bridge & the man on board waved to us to indicate he was turning and as he started to turn we noticed the name of the boat it was Nb Sanity Again but no sign of Bruce or Sheila at the tiller! It was another man, he wasn't turning the boat around but was reversing into Shobnall Marina, we forgot to get a photo,  the man then came onto the marina bridge to thank us for waiting. 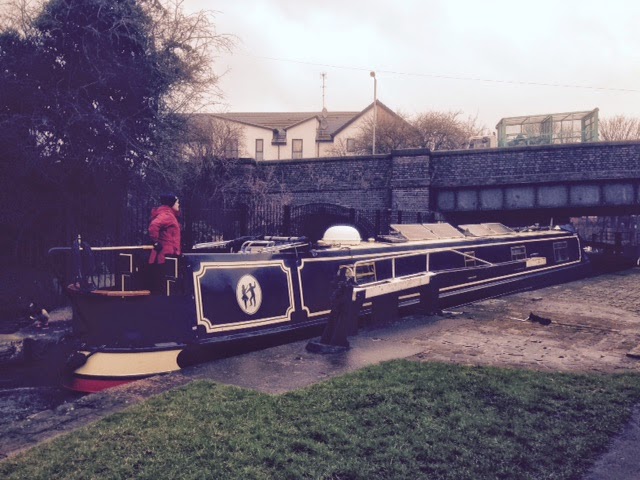 Kev took this photo as I am going into Dallow Lock, on his phone & its not very clear!
We were heading to Willington as Kev wanted to go to Midland Chandlers at Mercia Marina to buy a pressure relief valve for the Calorifier so we managed to moor opposite Mercia Marina at the
footbridge. We will stay here until tomorrow and Kev will change the valve before we leave.
Posted by Unknown at 08:06