A few days alone with Jaz, and we are expecting a new passenger!

Sunday 4th September
We are still moored at Brownsover, when we arrived on Monday we were moored next to the car park  but I asked Kev to move over to the towpath side as it is better for going to the shops. 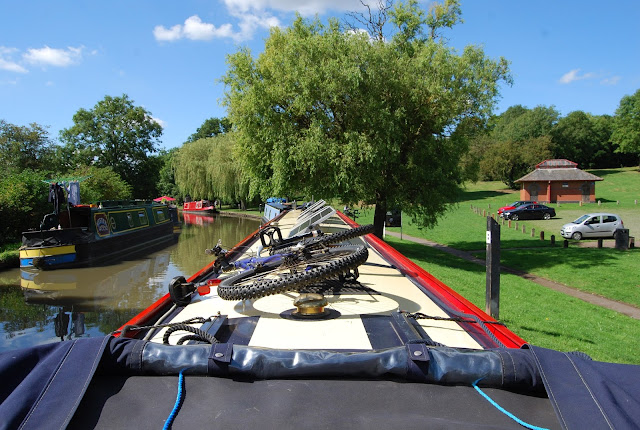 Moored next to the car park.
We moved to the mooring that is opposite the red boat in the photo above. As I was going to be on board with Jaz for 5 days  I preferred to be on the towpath side as sometimes there are youths in cars on a night in the car park. Although we have never had any problems with anybody here I still wanted to be on the other side. On Monday afternoon once we were sorted we had a walk over to the Bell & Barge pub for something to eat and very good it was too!
On Tuesday afternoon Kev got ready to leave as he was going home to take the bike home and also we were having some coal delivered, he also had a dentist appointment but the main reason that he had wanted to go home was to go to the Freedom Festival  with his uncle Alan on Saturday.
After Kev had left and I got back on board the boat, who should cruise past heading in the same direction as we were facing, but "4EverMoore" and I managed to have a quick word to the owners, who I have never met before as Kev dealt with them when we sold them the boat. They were just passed so I never got a chance to have much of a chat, but the man did say that the boat was going to Hillmorton the next day for painting. Wasn't he going in the wrong direction then! He shouted to me that the boat would look good once it had a new paint job! I just thought that if he had taken the trouble to look after it in the first place it wouldn't need one! I can understand that they would like to change the name but when I think that 4EverMoore was built the same year as "Rock & Roll"and the paint on here only needs a touch up here and there. But each to their own. Then on Wednesday  they passed again but this time they were heading to Hillmorton, but then on Thursday 4EverMoore came passed again this time with a woman at the tiller and I managed to shout to her to ask what the new name was going to be but she didn't know. So where she was taking the boat to I don't know but I assume it may have been going somewhere to be shot blasted before being painted at Hillmorton, who knows!
So I have been having some good walks with Jaz and also had a mooch around the shops that are close by. The weather has been good too although yesterday was crap! I felt for Kev & Alan at the Freedom Festival as it did pour with rain there. I have spoken to Kev this morning and he said it was still very good and he had a good time although he can't remember getting to his mams house with Alan. He stayed at his mams and left the car at her house as she lives in Hull so it was easier than getting from Roos as he would have had a messing about with transport.
Kev was driving our car to our marina at Shardlow today and then walking into Long Eaton to catch a train to Rugby.
The car will be at the marina for us when we get back to return home, which will be in a couple of weeks as we have a 70th birthday to got to, and I need to be home for doctor appointments. As Kev gets into Rugby about 7.15 pm I will take Jaz for a walk to meet him and then tomorrow we will pull across to the water and fill up before heading to Hawkesbury junction where we hope to get moored as Lee (Kev's son) and his girlfriend Vicky are coming tomorrow night and bringing their 6 month old chocolate lab "Marley" for us to look after while they go on holiday! So that should be interesting, in fact I have moved most things from the shelves as Marley is into taking things and his tail may knock things off too! Lee said that Marley will think he has come to Boot Camp! Anyway we will hopefully sort his behaviour out and we will probably need a holiday after he has been lol.