Onto The River Severn

Thursday 2nd July
Due to the lack of good internet connection for the last few days I haven't been able to publish a post until now. On Tuesday we left Kinver and we hadn't travelled far before we came across the same work boat that we had seen on Monday unloading house contents. 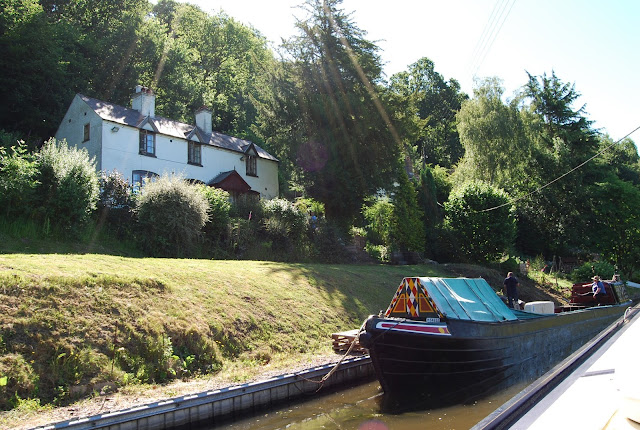 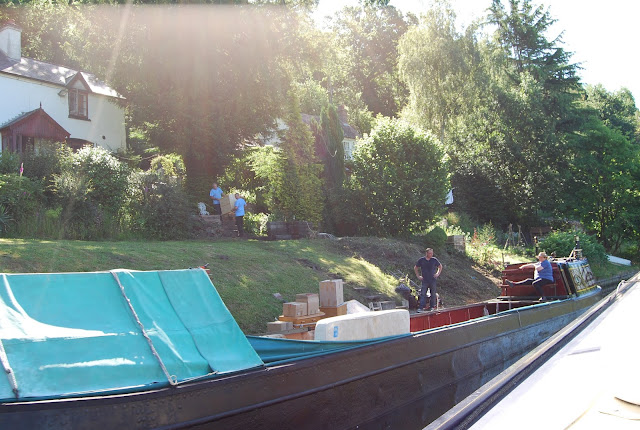 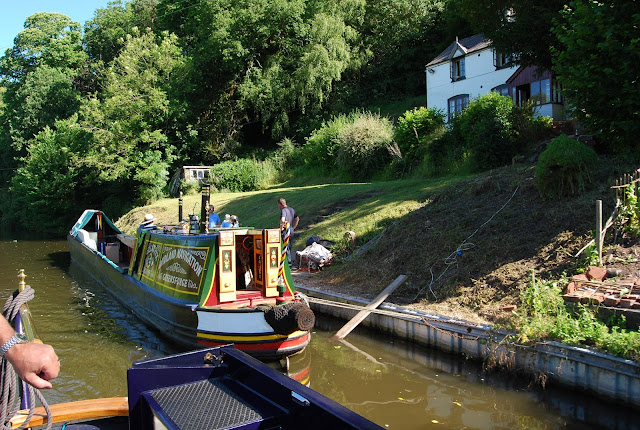 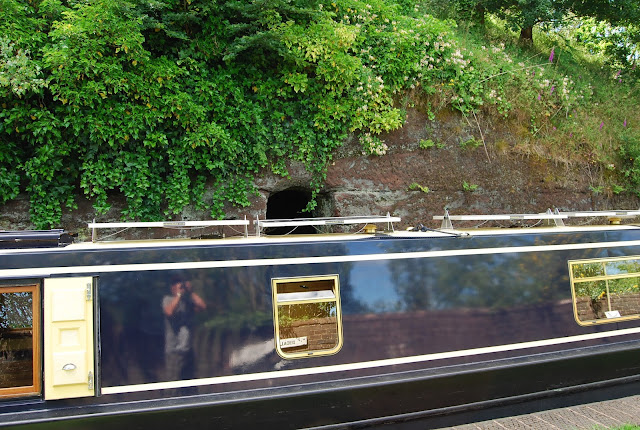 Debdale lock
You can see Kev's reflection in the boat, he was taking a picture of the doorway cut into the rock at the other side of the lock, there is nothing inside there, although some people think it could have been somewhere to keep the horses that used to pull the barges years ago, I don't think so as the only way across to it is across the lock gates as the towpath is on side Kev is so perhaps it was for something else.
We had a pleasant cruise in the glorious sunshine but not a long one today, I had done a wash before leaving Kinver so once we were down through Wolverley lock we decided to find a mooring so I could get my washing hung out on the rotary clothes dryer so just before we got to Wolverley Court lock we moored up for the day and had a relaxing afternoon in the sun. We sparked the BBQ up later in the afternoon and had a few beers too. Lovely!

On Wednesday morning we were off quite early and stopped at the moorings outside Sainsburys, we did quite a big shop and managed to get the trolley right to the boat and so it was easy to unload the shopping, I did take the trolley back to the store afterwards. After a cuppa & a jam doughnut each Kev let the ropes go and pushed the bow off then he walked round to the lock to set it for me and as I got there a boat was about to leave so good timing. 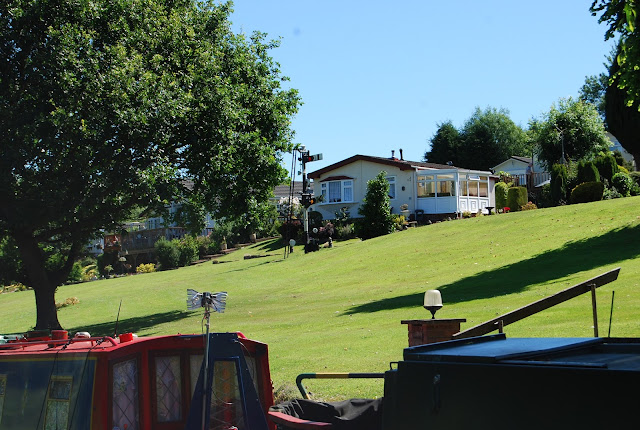 I see no trains! 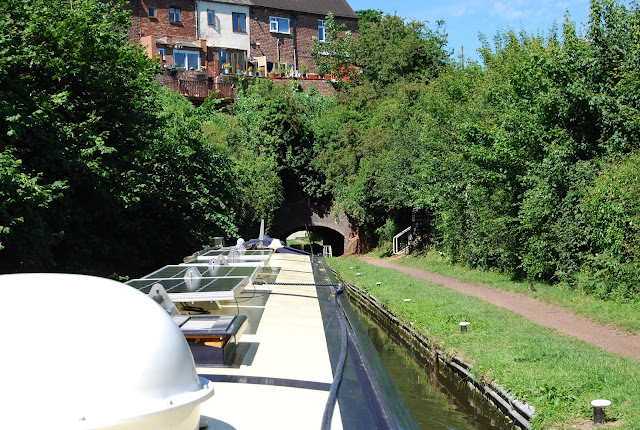 This short tunnel goes under a row of houses
We were going to moor for the day in Stourport but decided to go down through the locks onto the river Severn. It was quite busy here and there was a volunteer lockie on the locks leading onto the river there were 3 boats waiting to come up & 2 boats behind us but we weren't long getting down onto the river, the river wasn't flowing very fast and it wasn't long before we reached Lincomb Lock and shortly after we saw the moorings outside The Hamstall Inn and so we decided to moor there. Once we had tied the boat up we went into the pub for a refreshing cold beer and sat outside for a while. Kev asked the staff if we had to pay for our mooring but they said no as long as we used the pub. We went back to the boat and shortly afterwards another boat came and moored behind us, We were chatting to the couple and we noticed a hire boat across the river with its bow towards the bank, also another boat was coming in the direction of Stourport and went to help the couple on the hire boat. 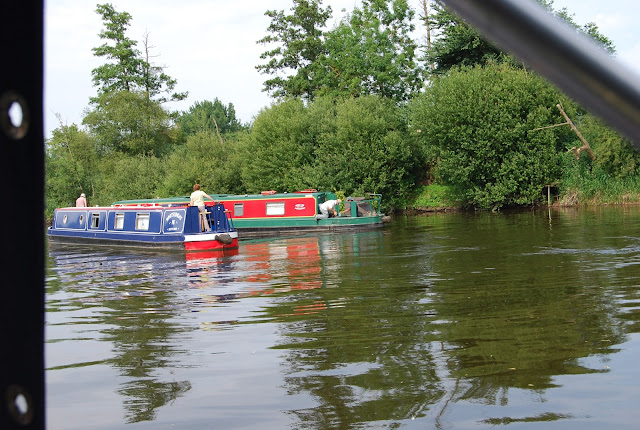 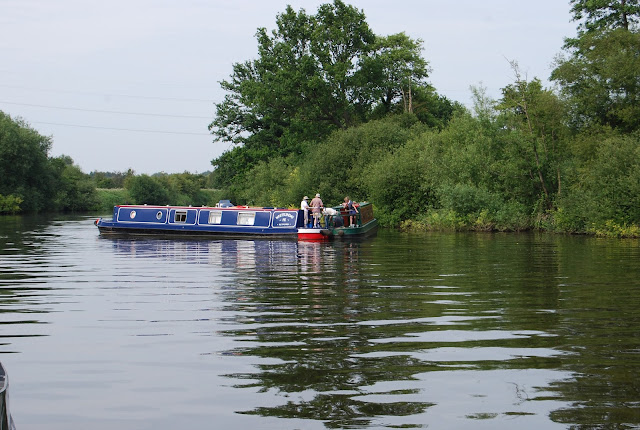 Apparently a hose had blown off his engine and one of the men on the blue boat helping them managed to get it sorted for them and soon the hire boat got its engine started and then moored up on the pub moorings, and the other boat carried on its way. A drink was then the next thing for them & who could blame them!
Now then this morning... 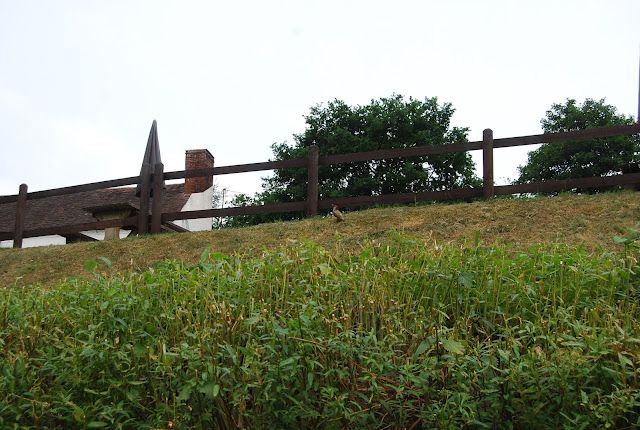 We spied this woodpecker through the window(if you can see it)
Shortly after this we left the mooring, it was cloudy but we hadn't had the storms that some people had, although it was cool but dry and we were soon at the first lock for today.. 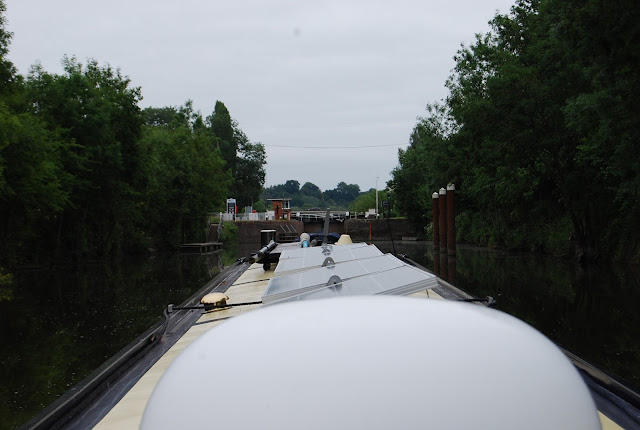 Approaching Holt Lock
By the time were were through our last lock of the day which were Bevere Lock the weather was changing and it started to rain so Kev pulled the canopy up as we wouldn't be going under any low bridges and so we were nice and dry! 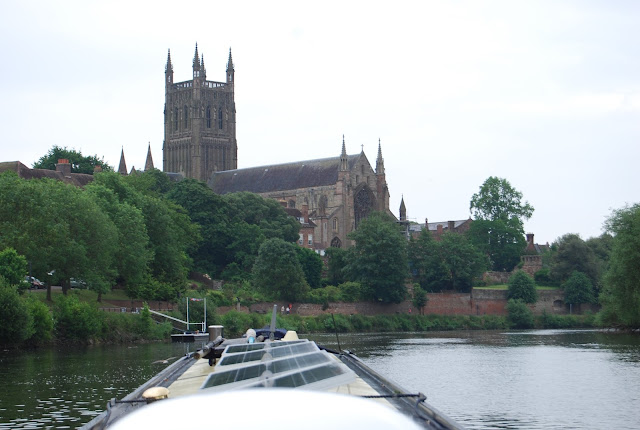 Approaching Worcester Cathedral
The rain had stopped now so we took the canopy down and cruised on till we arrived at the moorings just passed the entrance for the Diglis basin where we were able to get moored.
Posted by Unknown at 07:58