Back to Windsor & another new Widebeam!

Last Sunday Carol & George had invited Geoff, Mags, Kev & myself onto Still Rockin for Sunday lunch. Carol had done a lovely roast of beef and yorkshire puddings too along with vegetables, and then she had made 2 crumbles for pudding. We had a lovely afternoon apart from Kev knocking his glass of  red wine onto the table cloth. So we quickly moved everything off the table and Carol was able to put the table cloth into some cold water. No real harm done as I think Carol managed to get the stain out ok.

On Monday morning we had all planned to leave Runnymede and head for Windsor but it was pouring with rain first thing on Monday so both Geoff & Mags along with Carol & George decided that they would stay put for the day. Meanwhile we had to leave as we needed to make sure we could get a mooring in Windsor, as I had an Enterprise hire car booked for Tuesday. Anyway we didn't get very wet as we had the pram canopy up and only got wet when we were in Old Windsor Lock and then Romney Lock, we managed to get moored once again on the Baths Island moorings. It continued to rain for a while but then when it stopped it was overcast for a while and then the sun appeared. We had a text from Carol to say that both boats were going to leave Runnymede and join us in Windsor, we expected them to get to Windsor about 4.30pm but it was about 6pm I think when I spotted both boats coming towards us. Carol & George managed to moor in front of us and then Geoff & Mags moored on the moorings outside Windsor Leisure Centre.
While we had been waiting for the other 2 boats to arrive we had been watching a drone hovering over the river, 2 airforce men were flying it, and when Geoff was mooring up later that day Kev & George had gone over to help him moor up and they had spoken to the airforce men about what the drone was being used for and were told that it was being used to film the water and the footage was to be used for a Bollywood movie and there would be a body added to the footage by computer 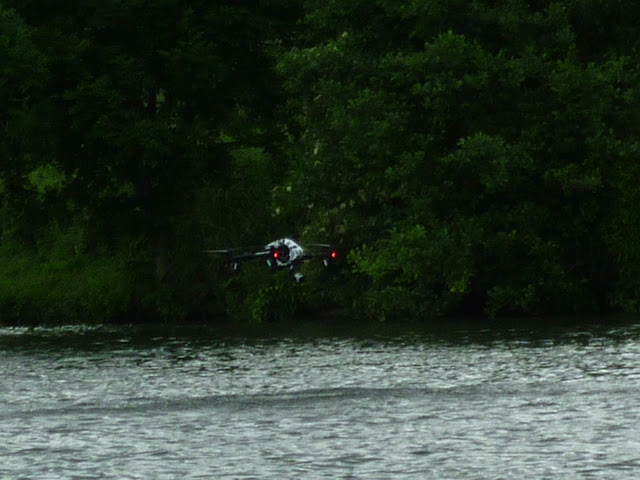 The drone hovering on the Thames
On Tuesday morning we knew that Geoff & Mags would be leaving about 10 am so George, Carol, Kev & myself all went over to see them before they left and Geoff made us a cuppa along with some flapjack & banana cake he had made!
We were expecting to be picked up at noon at the Windsor leisure centre car park by Enterprise and so we went back to R&R to pop Jaz for a short walk, then just before 11.45am both Kev & myself went to the car park and were picked up and taken to Slough where the Enterprise office was and once I had sorted the paperwork out we drove back to Windsor and we packed the car with some things I was taking home. I was going home to check on our home, see my mother & pick up any mail that was there. Kev was staying behind with Jaz.
While I was at home Kev had gone for a short cruise on R&R with Still Rockin up Boveney lock to the moorings at Dorney. He did however return to the moorings at Windsor on Wednesday as he had heard that the stream was increasing and due to the heavy rain that had been forecast he wanted to make sure he was back at Windsor to pick me up on Friday.
While he was back at Windsor he had a phone call from Sue on WB No Problem XL, she asked if there were any moorings and Kev told her that there was and so when I returned on Friday morning Wb No Problem XL was moored immediately behind R&R.
Once we had unpacked the hire car of shopping, etc and got everything onto R&R we had a cuppa before returning the hire car to Enterprise in Slough, and then we were brought back to Windsor. Sue came over to us to ask if I wanted a tour of the new No Problem! Kev didn't need a tour as he had been aboard the previous night for a few drinks with Sue & Vic! Another lovely new wide beam and we hope that Sue & Vic enjoy it as much as their previous narrowboat No Problem.
We invited Sue & Vic for a few drinks on board R&R last night and had a good laugh with them both. 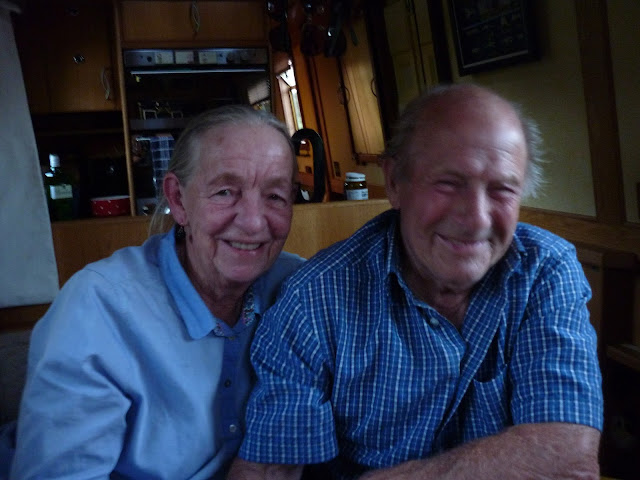 Sue & Vic, lovely smiles!
This morning we got up to a lovely morning, we popped to see Sue & Vic before we left and had a cuppa with them. 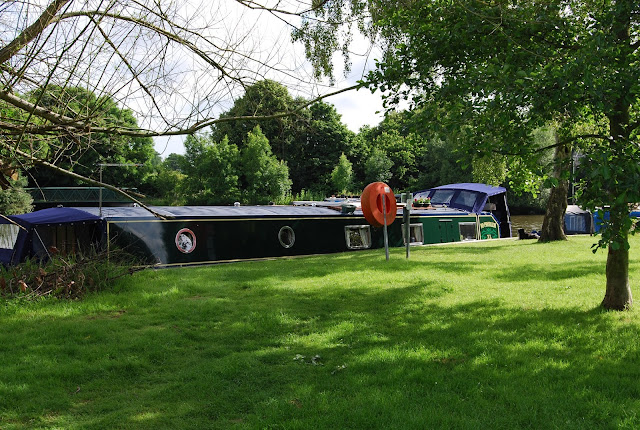 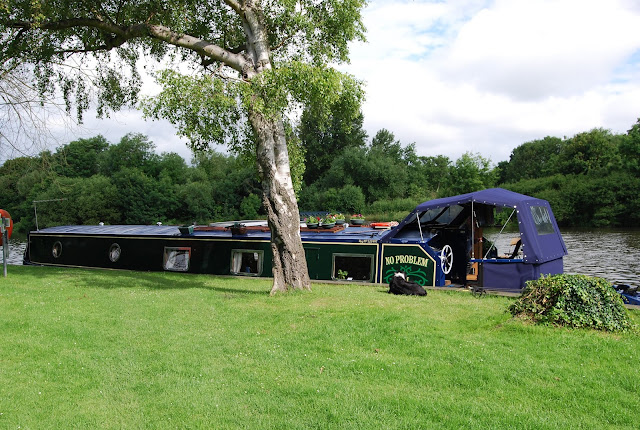 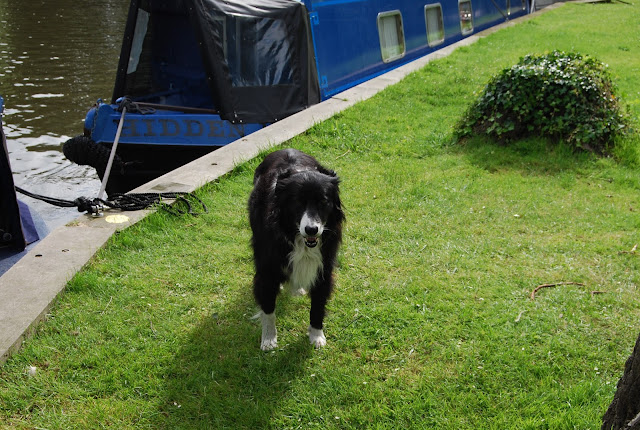 Meg posing for her photo 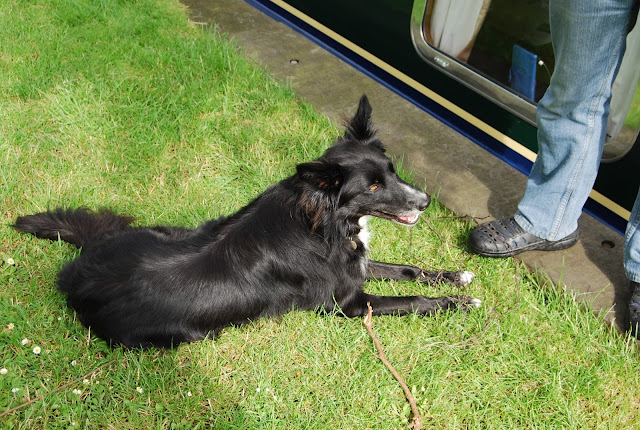 Penny just wanted Kev to throw the stick again for her!
We said our goodbyes to Sue & Vic and went back to R&R to get ready to leave, it was starting to cloud over as we left, we were heading for Boveney lock and were going to moor at Dorney where Still Rockin was still moored there. 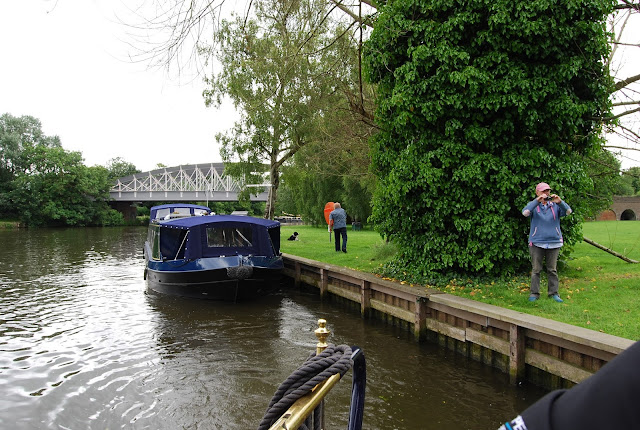 Sue taking a photo of us as I take one of her! 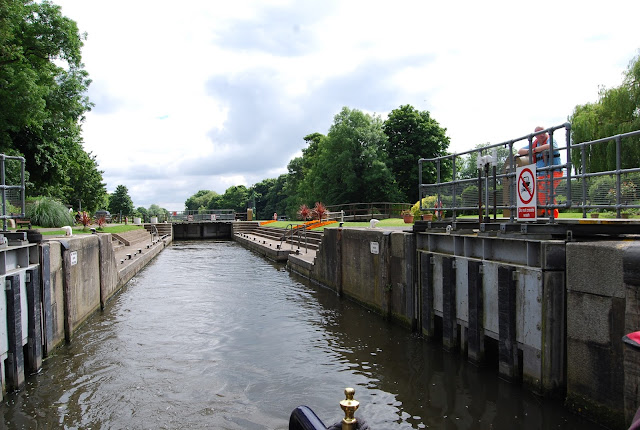 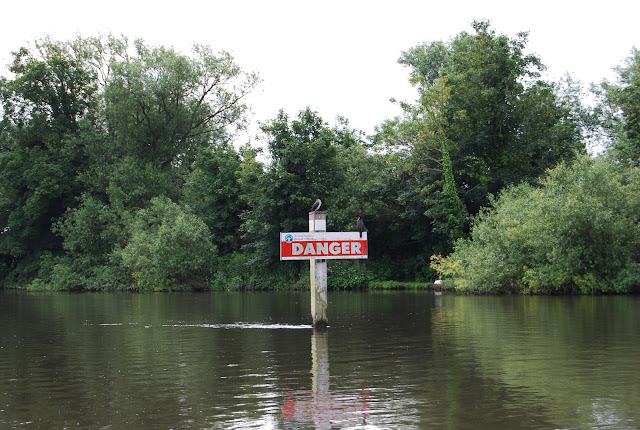 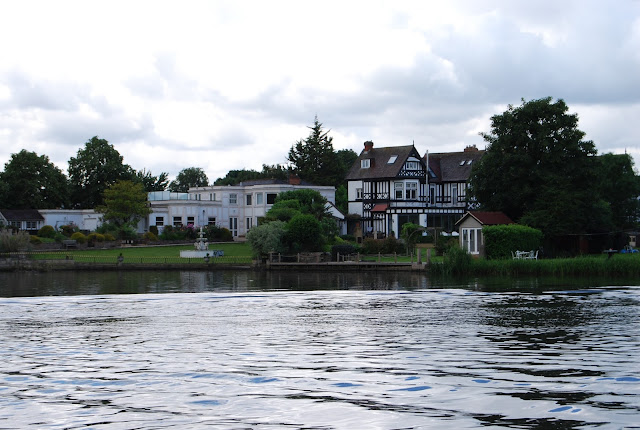 Moored at Dorney opposite are a few large properties.
Just before we got to the moorings at Dorney the heavens opened up and it poured with rain! Typical, but it did ease as we came alongside and George had come to help Kev with the ropes while Carol put the kettle on! Once we were moored up we went onto Still Rockin for a cuppa and a chat with George & Carol. We will stay here until Monday, Sue & Vic will be joining Carol & George on these moorings on Monday so they will be able to have our spot. Sue is going to see Elton John @ Blenheim with her daughter tomorrow so I hope she has a great time. Vic will be enjoying his peace & quiet with the 2 dogs for company.
Posted by Unknown at 06:13