A busy week, fellow boaters around for a bbq!

Friday 26th August
It has been quite a busy week, mainly for Kev though as he has been painting. On Tuesday morning he decided to go turn around to face in the opposite direction, the reason being that he wanted to paint the top rails and if we had stayed facing towards Braunston he wouldnt have had chance to do the Starboard side as the towpath is on the Port side all the way to Hawkesbury Junction. When we returned back to bridge 102 we managed to get moored closer to the bridge which was better for going to the car. After lunchtime we noticed a familiar boat moored further along the towpath, it was Del & Al, Nb "Derwent 6"and they came over to see us and said they had moored further back from us as they now have a cat, (The cat had been a present for Al's mum before she died) and with us having Jaz they thought it would be better to keep their distance. I must admit that Jaz is starting to be a really good girl, and she loves being outside on the towpath, she just lays beside Kev's chair and has started to take notice when people or dogs are approaching and when we say wait she actually does!! She is however still very fussy and jumps at people if we don't curb her, but she will get there in the end.
We arranged to have a BBQ with Del & Al at  about 4.30pm and so I popped into Daventry for a bit of shopping beforehand. We told Del & Al we still had some throw way BBq's that we wanted to use so when they came to us at 4.30pm Kev got the 2 bbq's out and lit them, the only thing was that he had forgot to take the outer cardboard off one of them before he lit them!! 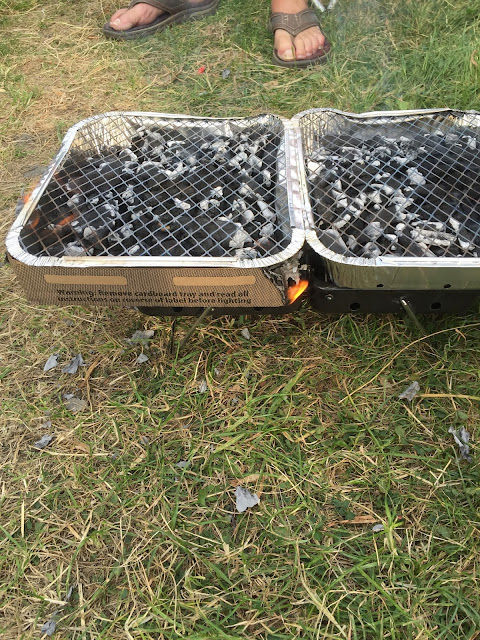 It was funny, at least Del's feet got a warming!
We had a lovely evening with them both and a few good laughs too. On Wednesday morning Kev made a start on the painting and closer to lunchtime Del & Al came over to say that they were going to set off and so we said our farewells and hope to see them again probably next year. 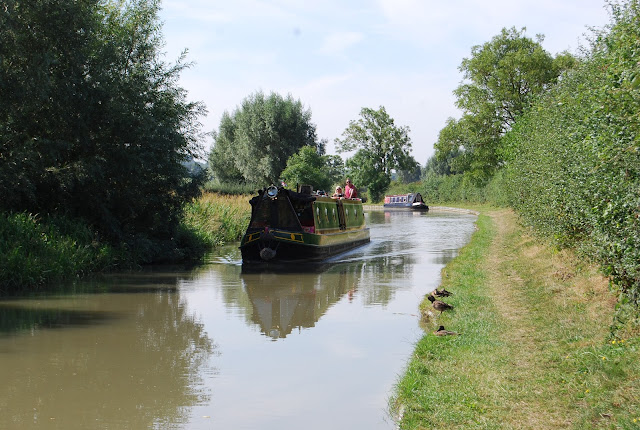 Derwent 6, heading towards us. 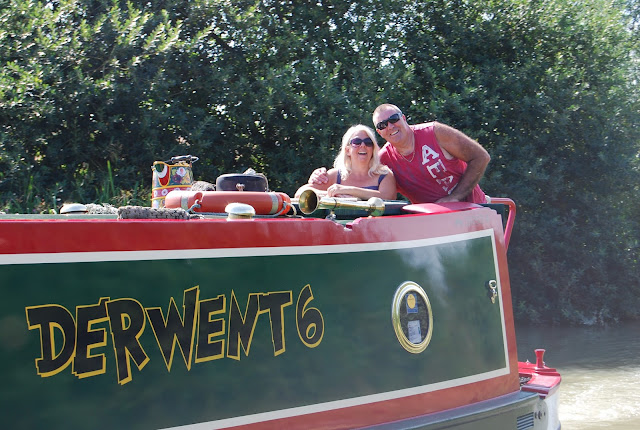 Two very happy boaters!!
Kev managed to get the top rail finished and we are very pleased with the way it looks, just the other side now! 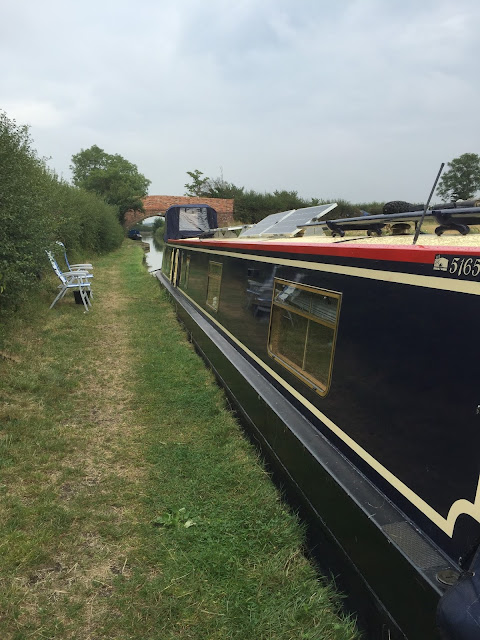 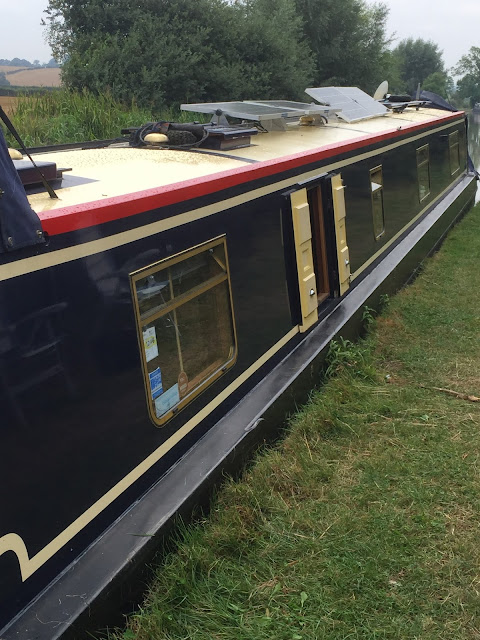 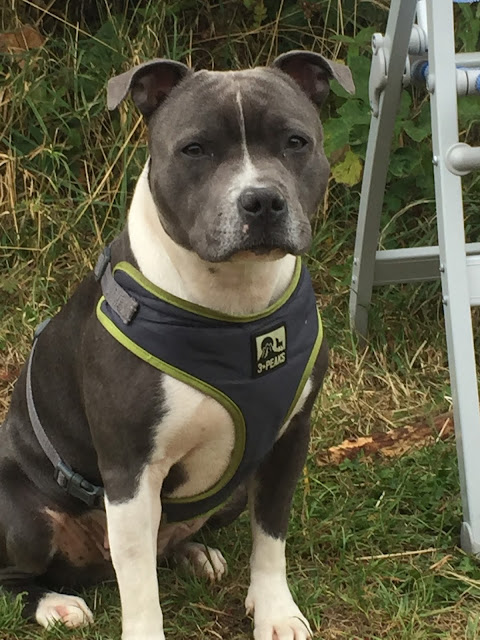 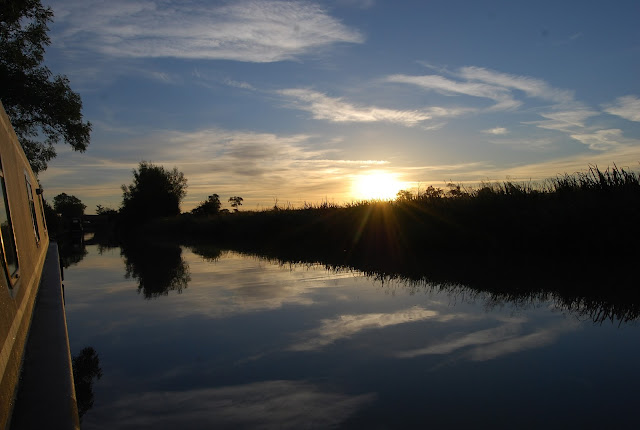 A lovely sky in the evening.
Kev had a phone call from our friends who are checking our home & getting the mail, Otto told Kev that there was a letter that had gone to our old address but it was a reminder that our MOT on the car should have been done on the 4th August! Anyway we had to do something about it so we found a garage close to Daventry and Kev arranged for me to take it in yesterday morning and wait for it. They were very friendly and made me a coffee while I waited and after about an hour & a half the car was ready, £40 all done nothing wrong at all and we are all legal once again.
We now have a new satellite dish which is controlled manually and is working a treat, Kev has a magnet underneath it with a thin cloth between the magnet & the roof so we don't scratch the paint.
This morning we left bridge 102 and headed off to turn around which we did just through bridge 107, Kev got off with Jaz at bridge 103 to give her a bit of a walk and then when we arrived back at our mooring once again, Kev got the centre line and I jumped off and put Jaz back on board while Kev stayed on the boat to head to Braunston and I went in the car to Tesco's in Daventry. I drove to Braunston to meet him and I pulled into Midland Chandlers car park to find R&R moored at the water point there, so that was good timing and we managed to unload the shopping onto the boat. We were quite low on water as the last time we had filled the tank was at Cropredy! Kev went into Midland Chandlers as he needed some more masking tape so he asked if we could leave the car there while we found a mooring, and they were fine about it. There wasn't any moorings where we wanted to be so we were quite happy to head to Willoughby and we were soon moored once again. After we had a bite to eat Kev got the bike down from the roof and went by road to Braunston for the car, he wasn't going to risk riding on the towpath as he got a lot of punctures before! So now the car is parked next to the bridge at Willoughby. 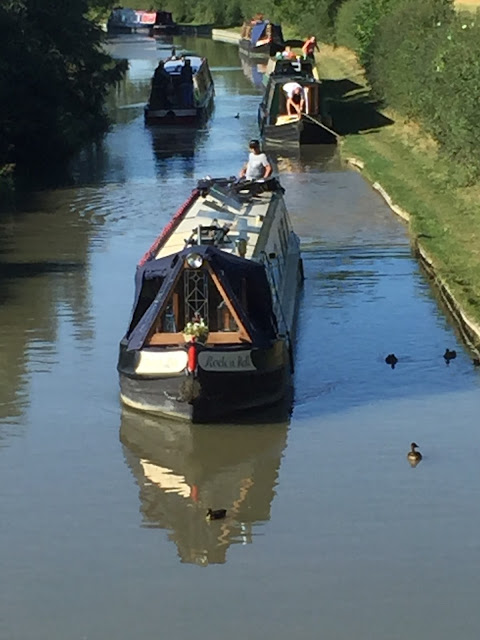 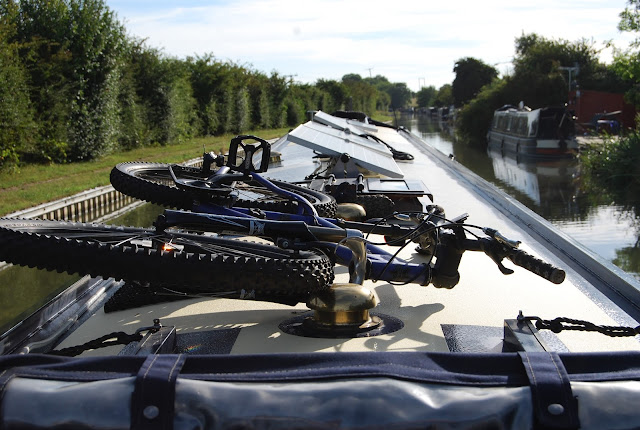 The bike is now in the spot where the original Satellite was.