Back on board again with a passenger!

On Kev's birthday 30th July we were at Banbury, Kev's daughter Colette & her son Joseph had driven from Bristol the day before  (Friday 29th July) and we all went for a meal in the evening. Colette was going to give me a lift back to Hull as she was going to visit her mum & brother Lee, but we would have to travel back to Bristol to pick up her partner Ryan, who had been unable to come with her on Friday. Anyway on saturday morning before we left Kev at Banbury we helped him through the lift bridge & down Banbury lock where we pulled onto the water point at the services there & this was where we said our goodbyes. 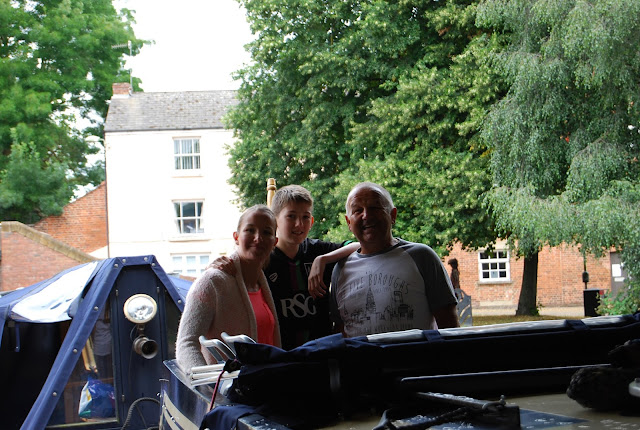 Colette, Joseph & birthday boy Kev!
Kev was heading back to Thrupp to meet Nigel his friend who was going to spend a week on the boat with him, they would be going back onto the Thames & then returning to Thrupp in time for the 7th August as I was returning the next day & would be travelling on train with my mam. Some friends of ours from our village Ron & Denise were going to be staying in their caravan at a small site at Kidlington & they would pick both myself & my mam up from the train station at Lower Heyford.
I had been at home for about 9 days and had several things to do while I was at home one of which was to attend dear Dolly's funeral, which I have to say was a lovely send off to her & at 98 years of age she had a good life but is stilled very much missed!
By the time I had got back on board with my mam Nigel had already left & Kev and Jaz were waiting outside the boat for us & Kev helped us with our things from Denise's car. In the evening we went to the Boat Inn, were we had arranged to meet Ron & Denise for a meal which was very good.
On Tuesday morning we were waiting for Ron & Denise to arrive as we were going to go for a jolly on the boat, they were a bit later than we had expected and it was well after 10 am before they were aboard. They had with them Duke a black Labrador, they were looking after him for some friends while they were on holiday! 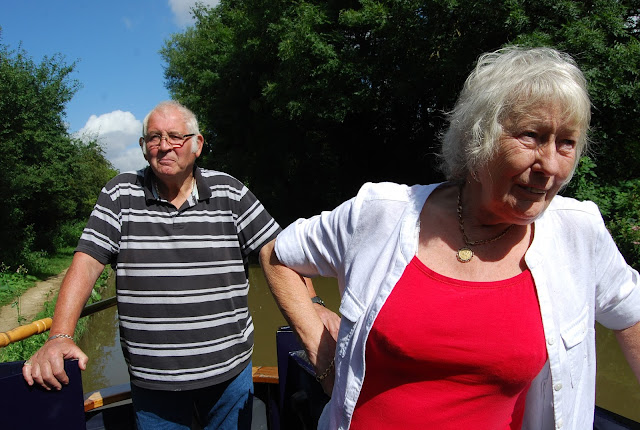 Ron & Denise waiting with us at a lock. 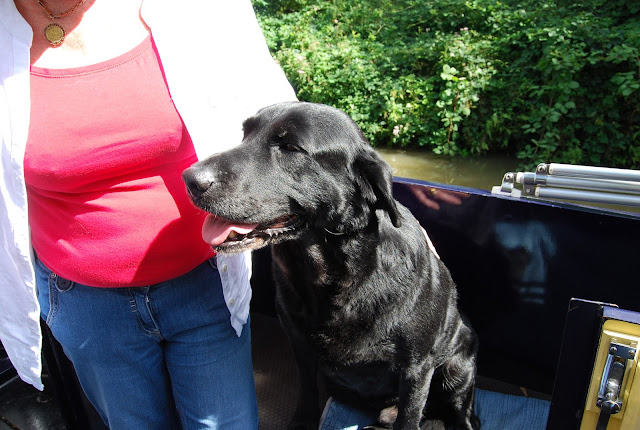 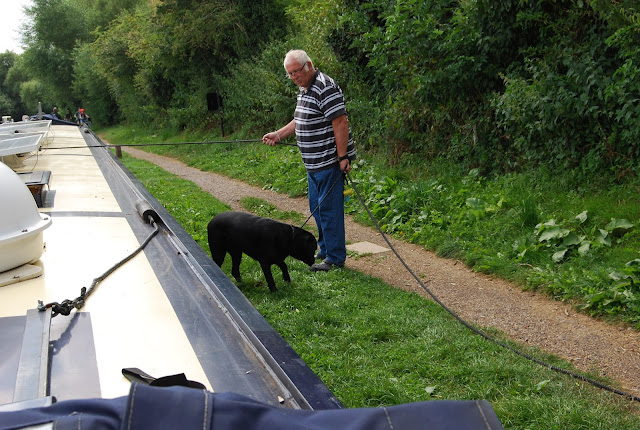 Ron decided to take hold of the centre line while we were waiting our turn at a lock! 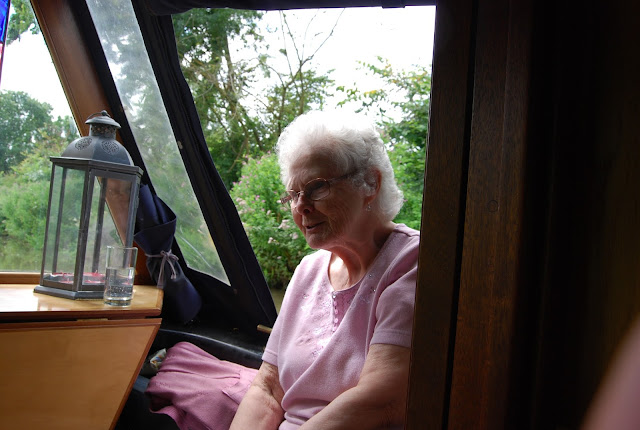 My Mam enjoying the cruise.Apart from the locks that is!

We had a pleasant day and we had gone through the lift bridge at Thrupp and turned to head back towards Oxford, the weather was lovely and when we got down through Dukes lock (aptly named that day) as we had Duke with us we turned around and headed back to Thrupp where we managed to get moored ok close to the Boat Inn. Later on in the evening we met Ron & Denise in The Boat Inn for a few drinks but my mam decided to stay on board with Jaz. Also in the pub was someone we knew, it was Maffi with his Staffy Molly, he was moored through the lift bridge and has been there  for a while as Kev had seen him  in the Boat Inn while I was at home. When we left the pub we said our goodbyes to Denise & Ron, they will be away for 3 weeks in their caravan and are going to see relatives in Weymouth but we may meet up with them again when they are heading home.
On Wednesday morning I walked to the lift bridge while Kev left the mooring and when he got through the bridge he managed to get moored at the water point as there was nobody on it. The water was very slow to fill and by the time we were finished there was quite a queue! As we pulled off from the water point we passed Nb Milly M, but I never saw Maffi. 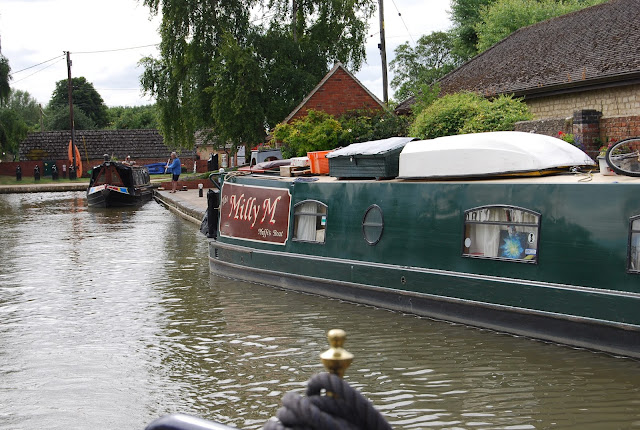 NB Milly M
We had a nice cruise and we were going to moor at Lower Heyford and wanted to moor where we had moored previously after Mill Lift Bridge but the water levels were so low that we couldn't get alongside, when I was walking to the lift bridge there was a boat that had just come through it and they got stuck at the towpath side as the man was trying to get back on board after closing the lift bridge but the level was a good 18 inches down. We did learn that CRT were on their way as somebody had left some paddles open along the way, so we carried on up Allens lock where we moored for the night. This morning we left just after 9am and had quite an uneventful cruise until Somerton Deep Lock, I went up to get the lock ready and there was a boat ready to enter the lock to come down and then as they were coming into the lock another boat came along, so I told the lady on the boat entering the lock to get on board and I would do the lock for them as I was sure the other people on the other boat would come and give me a hand with the gates! Oh no they didn't they all sat on their boat and watched me struggle with the heavy gate! My own fault I know for offering to help a fellow boater, but I always like to think we all help each other! I know people don't always like other people working the paddles for them but usually people help with the lock gates! They still sat there on their boat until we were up the lock and leaving, only as we were passing them did they make a move. Kev thanked them for helping me but only got bemused looks from them all while I said a few choice words!
We are now moored at Twyford Bridge for the night.