Firstly I hope everybody had a good Xmas & New Year, we have been very busy since we got back to our cottage in Burton Pidsea. When we moved from Roos where we had lived for 25years we missed it very much (well probably me more than Kev) & wouldn't have left had there been a property for sale that didn't have a garden or hedges that would need taking care of whilst we are on R&R. Then a friend of mine, Pam who lived in Roos told us about a cottage that had been totally renovated and we did know which one it was and a man lived in it and he had since died, so a couple had bought it for their son to buy once they had completed the renovation work, but he couldn't get a mortgage! Anyway we put an offer in which was accepted in November and we managed to get moved in on 19th December! In time for Xmas so we have been very busy and now we hopefully have somebody who is going to rent the cottage in Burton Pidsea fingers crossed, we have used a letting agent so she will make sure we don't have to worry while we are away on R&R.

Kev had got R&R booked in for blacking at Shobnall Marina for Friday 22nd January, his friend Nigel had offered to go with him from Shardlow Marina to help him with the blacking while I stayed at home with Jaz, I dropped them off at our marina on Tuesday 19th January and then came home. 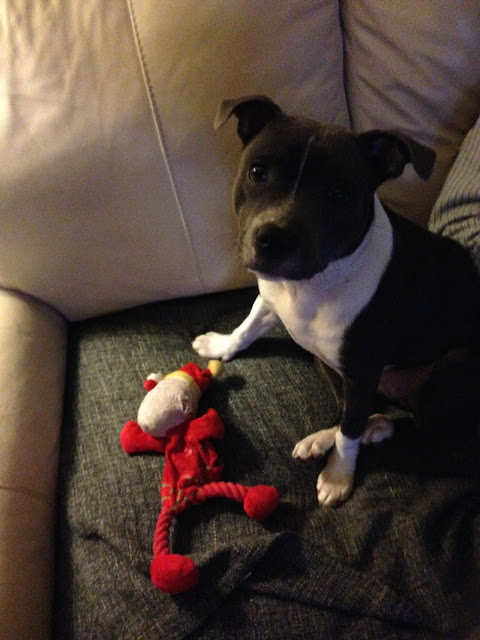 Jaz with her Xmas toy
Kev & Nigel arrived at Shobnall on Thursday afternoon and they went across to see Gareth at the dry dock  who told them he would come out to them on Friday morning at 9am and sure enough at 8-50am he came to R&R. They followed another boat that was going into the dry dock for a rudder repair and by 9-45am they were on the chocks in the dry dock and then Sam (Gareth's son)began to steam clean our Hull!
Kev & Nigel asked Gareth if there were any good pubs nearby, and they both ended up in The Coopers Arms which according to Kev was like stepping back in time. Think I will have to give it a try when we pass through Burton upon Trent!
Over the weekend Kev & Nigel managed to get 3 coats of Comastic on the hull & repainted the tunnel bands. Kev had been dying to get the boat out of the water so he could finally see what condition the hull was in and was pleased to find it was fine and so too were the anodes and so he didn't have to replace them even though he had bought new ones but they will keep for next time the boat needs blacking. 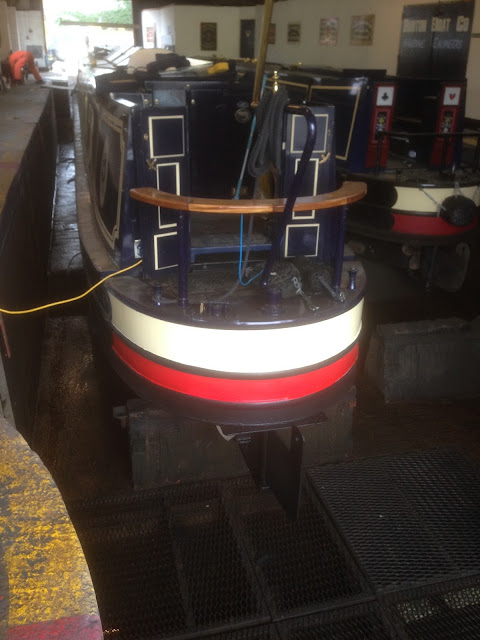 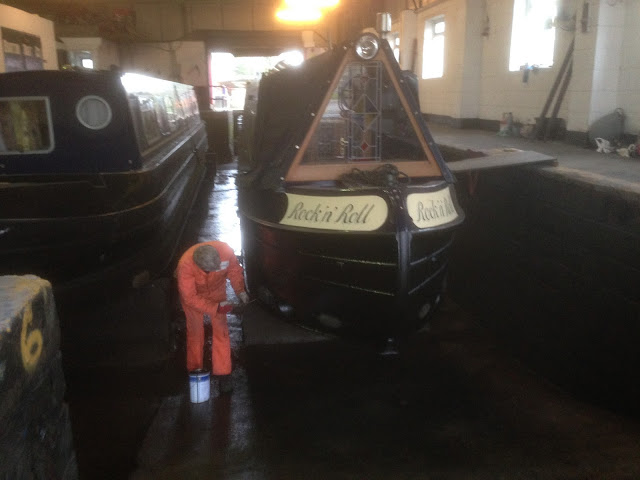 Kev would like me to say that all the people in the marina & chandlery were all extremely friendly and would like to say a big thank you to Gareth, Sam & Dave and he would highly recommend Shobnall marina to anyone wanting to use it for DIY blacking etc.
Kev brought R&R out of the dry dock on Monday morning and made his way back to Shardlow marina & on Wednesday morning Jaz & I arrived at Shardlow to pick both Kev & Nigel up and come home.
A job well done, Kev is pleased with it and we will be back on our travels around the beginning of March, we are heading for the Thames this year and so we hope that we will get to see Carol & George on their wide beam " Still Rockin" on our travels.
I would like to wish everybody a belated Happy New Year.