A couple of good day's cruising

Wednesday 3rd May
On Monday morning as we set off a hire boat which was moored behind us set off in front of us so we knew we had someone to share Stenson lock with. 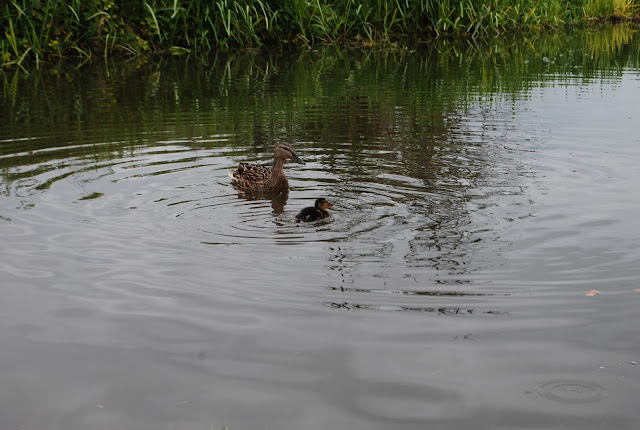 The first duckling I have seen this year. 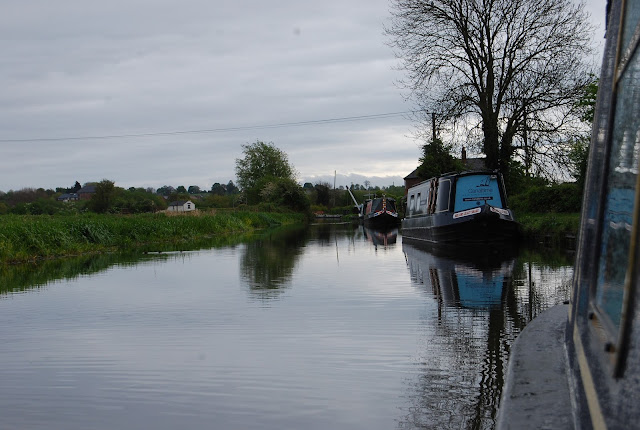 Moored at Swarkestone
When we arrived at Stenson lock there were quite a few people at the lock and they opened the lock gates so we were able to go straight in, Kev went up the ladder to help work the lock and the jumped back aboard as I was leaving the lock. There was a few boats waiting to go down so that was a result.
We moored for a short time close to Mercia Marina and had a bite to eat before heading off again, and the weather wasn't too bad although a bit cool, not a lot of boaters on the move though. While moored here outside Mercia Marina Kev tried to use the Bow Thruster as he suspected the prop was fouled (when leaving our marina Kev thought that the bow thruster batteries may have been a bit low as the noise from the thruster had indicated this) but after going in though the weed hatch the prop was clear. In October last year Kev took a friend out with him for a week and his friend (without exaggeration ) used the bow thruster more in one week then it had probably been used since installation and he thinks this has resulted in gearbox failure, so now we are looking at replacing the unit but unfortunately that won't be until spring next year when the boat is booked in to Dry Dock for blacking, fortunately we don't use the thruster much, mainly for manoeuvring in Marina's. 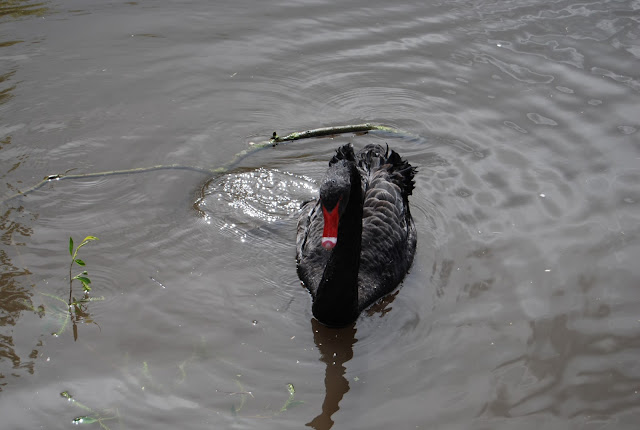 This black swan on his own just after Willington.
Not far from Willington we got caught in some rain which was quite heavy for a while and then soon stopped, Kev got off the boat with Jaz once it stopped raining and walked her to Dallow lock while I followed on the boat. As I approached Dallow lock there was a boat about to leave so that was good so I could go straight in. Kev & Jaz got back on board here and we carried on and we decided to call it a day & moored before Branston Lock.
Yesterday morning once we were ready I set off walking with Jaz to set Branston lock while Kev let go and followed me on the boat. Once he was clear of the lock I carried on walking on the towpath with Jaz. 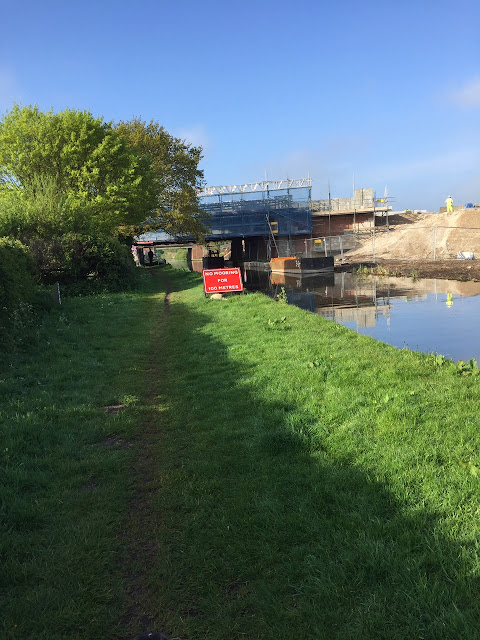 The new road bridge at Branston
The work on the new road bridge looks about complete and the surrounding area has had trees planted so it won't be long now before they start building all the new houses.
It was a lovely morning and a lovely walk up to our next lock with Jaz, Tatenhill lock was full so I emptied it ready for Kev to bring R&R in. I then got back on board with Jaz and we carried on once again. 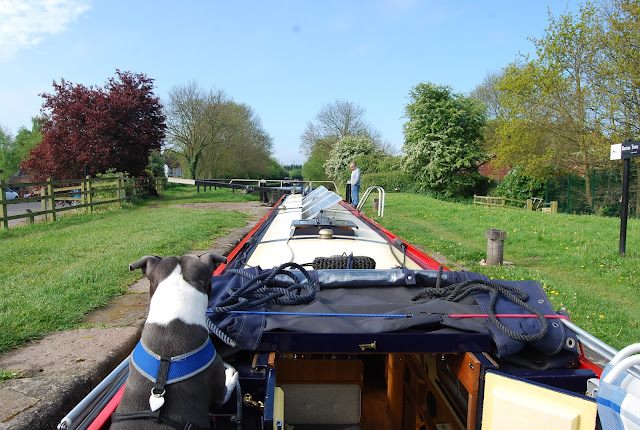 Jaz keeping her eye on Kev in Barton Turn lock!
By the time we were approaching Alrewas we could see people at the lock and once again there was a boat leaving so once again we were able to head straight into the lock! Kev got off as I was going into the lock and there was another boat waiting to come down. I stayed aboard once again and I came out of the lock while Kev walked to the next lock at Alrewas. It started to be slightly busier now as there was a boat going in the next lock as I got there but there was a hire boat also waiting ahead of me. Kev came to take the centre line while we were waiting, but he asked the people on the hire boat if they would move along the lock landing as they were far back and if another boat came they would think that the hire boat was not waiting for the lock and would possibly jump the queue. They must have misheard him and the man at the tiller moved to the doors of the lock! It was quite funny watching him manoeuvre as he backed up into the bushes. 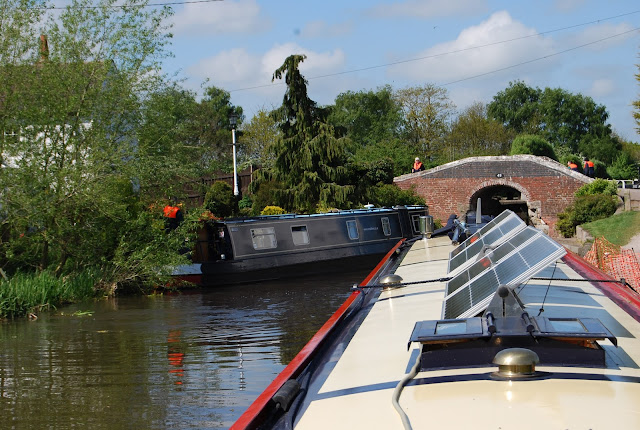 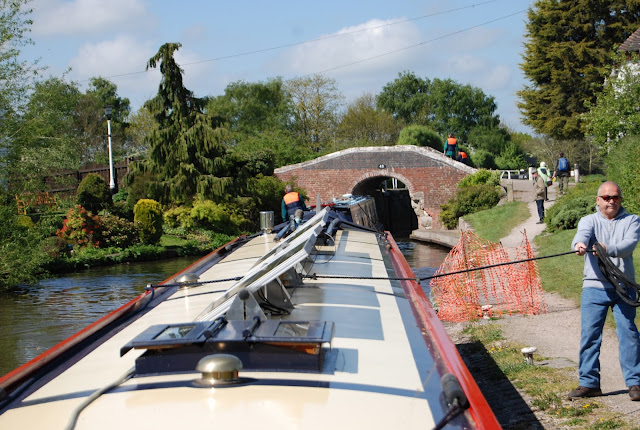 I went up to the lock to help the hire boaters, and it wasn't long before we were through the lock and we pulled over to moor and have a bite to eat. When were getting close to Fradley there was a man laid on the floor on the towpath with a woman stood over him and also a volunteer lock keeper there too. We asked if we could help but they said there was an ambulance on its way, which arrived and as the ambulance could get down the towpath they had to get a stretcher and walk down to the man, who it turns out was Diabetic. Hope he was ok, we stopped briefly at the services in Fradley to empty the cassette and then were on our way again, it had been a lovely day weatherise and quite warm when the sun was out. We got to Rugeley at about 4.30pm and moored where the Tesco is, we walked across to Morrisons as I am not keen on Tesco and got some shopping. We were on our way once again and finally moored at Taft bridge for the night. It had been quite a long day for us and we had done 17 miles and 13 locks 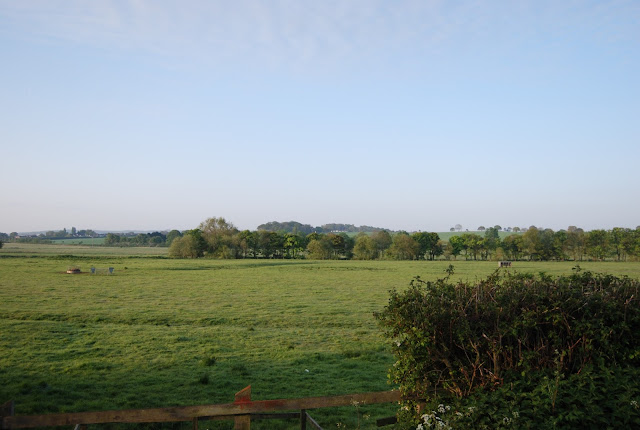 Lovely view across the fields 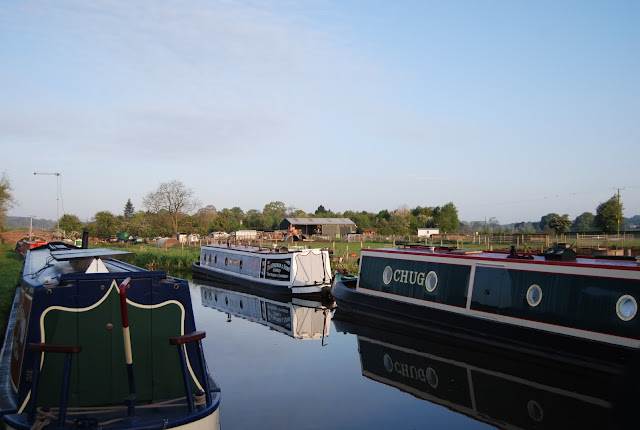 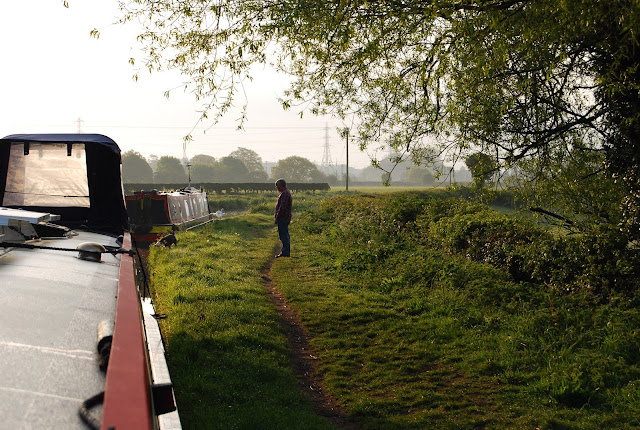 Kev out with Jaz