Thursday 28th July
When we were moored at Thrupp we were close to the busy road  which was quite noisy, so we moved up a bit further and moored near The Boat pub. It was another glorious day and we sat out in the sun with Jaz and around lunchtime we popped over to the Boat pub for a cold beer and then we sat outside again for most of the afternoon. In the evening we went back over to The Boat for a meal which was very good.
On Sunday morning we were waiting to leave but we had arranged to wait for another boater who we had been speaking to on Saturday afternoon. He was on a boat called Tadpole 2 and his name was Pete and his wife was called Val, they were moored outside the other pub The Jolly Boatman and they didn't care for it there so they wanted to move up to the moorings where we were and as the moorings were full they had to stay where they were until we told them they could have our spot. I was just about to walk to see them when Pete came walking towards me to ask if we were ready to leave and so he went back to his boat and then when we saw him coming we let go our mooring ropes and set off to the lift bridge where Thrupp  BW services are situated. Kev walked on to get the bridge up for me and I picked him up after I had got through the bridge. We  got to Shipton Wier lock that takes you onto the River  Cherwell for a short distance to the next lock which is Bakers lock where there was a couple of boats ahead of us one of which was just entering the lock and the other was on the lock landing so we pulled in behind them. 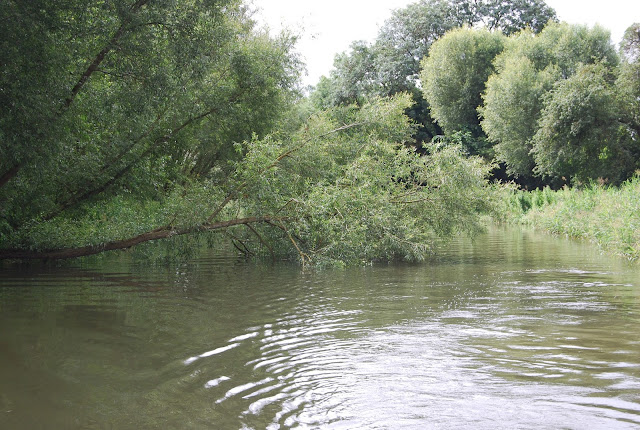 This tree had fallen across the River Cherwell, just enough room though!

We had a pleasant cruise and moored after Northbrook bridge.
On Monday morning we left at about 9.30 am and I walked up to Dashwood lock where a man was opening the gates for us as he had been moored above the lock and as he had walked to fill the lock he saw me walking towards it, so that was a bit of luck. We wanted water so when we got to the water point at bridge 206 at Lower Heyford there was a boat already on it so we waited for them to finish and then we got the hose out to fill ours, it was vey slow going. I put the kettle on and Kev was talking to a woman across the canal who was tending her plants on her canal side property, she was lovely and also had a boat moored outside her home. She was an American lady called Anita who has lived here with her husband for over 30 years, she was a mind of information about this part of the canal and we had a very long chat with her while waiting for the water to fill. We wanted to know if there was a shop near and she told us there was a small shop about a mile away at Steeple Aston, and she then said she would take me which was very kind of her, and she told me to walk round to her house when I was ready. When the water was full we pulled the boat back away from the water point and had a bite to eat and then I went over to Anita's house and she took me to the shop and also took me for a look at Rousham House, although we only drove to it and turned round. What a lovely lady she was and when we got back to Lower Heyford she dropped me at the bridge and later on Anita came over to the boat with lots of photos of the flooding  1998 & 2007 that occurred close by. 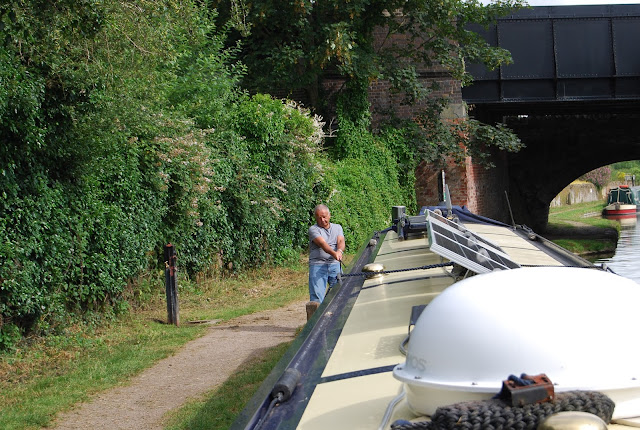 Kev pulling the boat onto the water point. 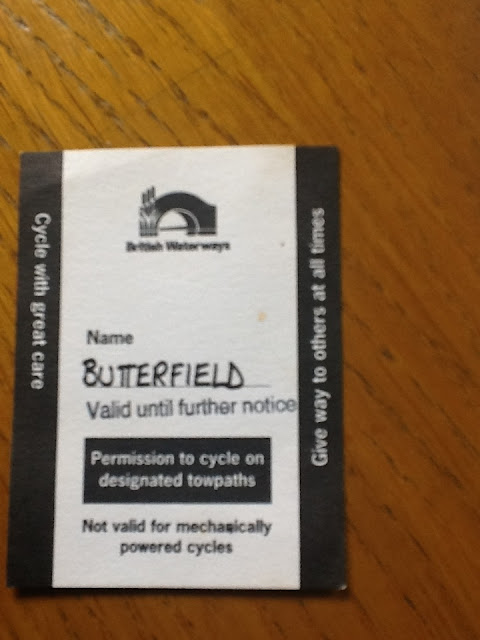 This was Anita's  cycle pass 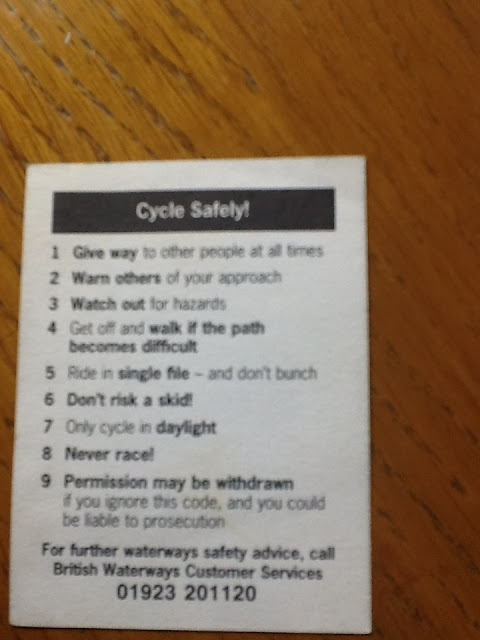 We don't see these anymore! Perhaps we should! 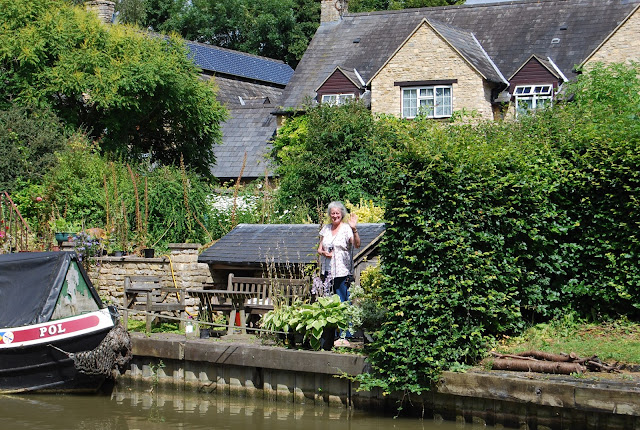 Anita waving bye as we left. 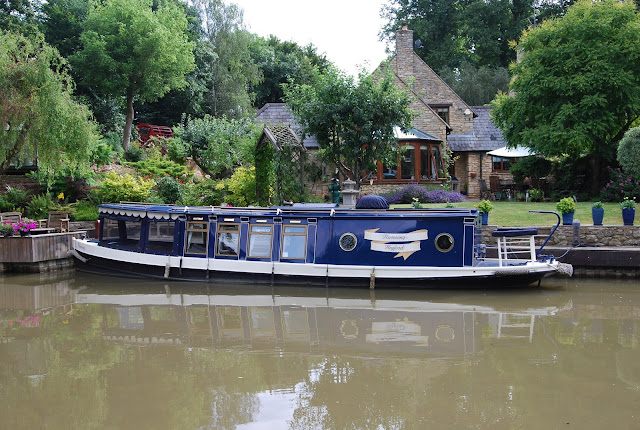 This is the property next door to Anita with a pretty boat moored there.

We soon got to Mill lift bridge an as we approached a man walked across it and opened it for us. 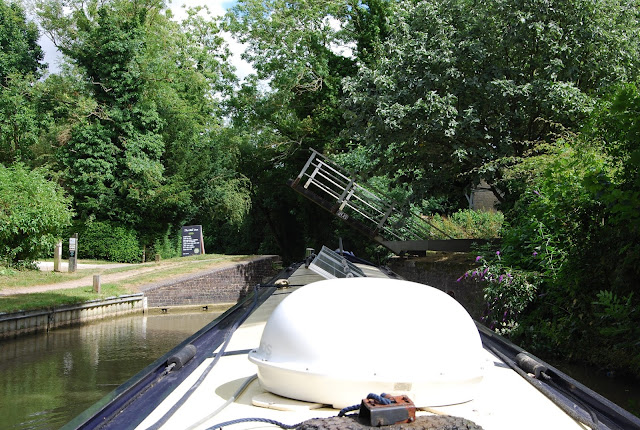 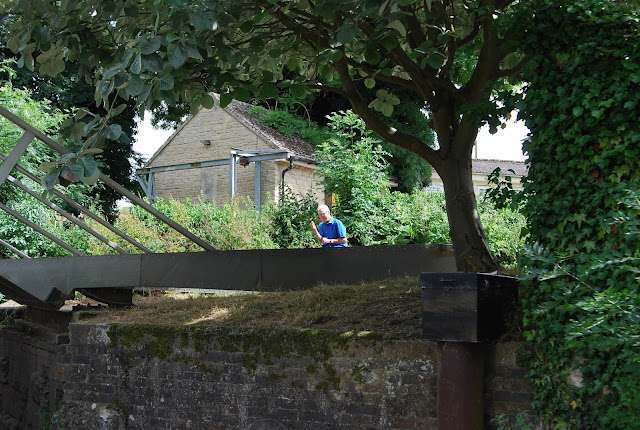 A wave to say thank you to him, and a wave back.
This lift bridge would be very difficult if you were a single handed boater as it opens on the other side and the landing is on the towpath side! So you need a kind person to help or wait for another boat to got through! As we got around the bend from the lift bridge we decide to moor for the day, there was no WiFi signal or phone signal here. On Tuesday we had an uneventful cruise and moored after Kings Sutton Lock and then yesterday morning we set off for Banbury and as we wanted some shopping we decided to moor before bridge168 and go to the Morrisons store that Anita had told us about and it was only a 5 minute walk across bridge 168. When we had unpacked our shopping and had a bite to eat and then set off again and stopped at the BW services that are just before Banbury lock. 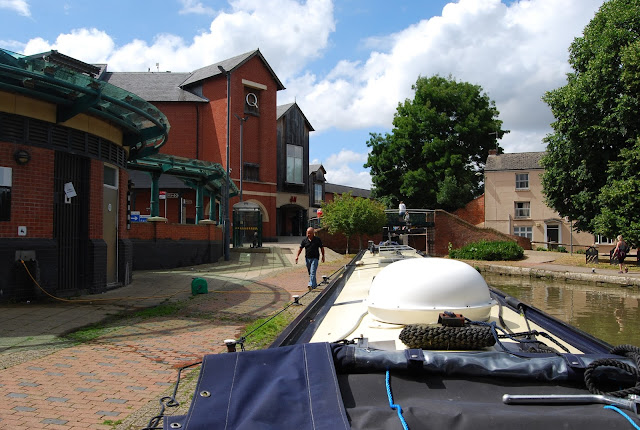 Kev going to turn off the water as we are full again!
We got up through Banbury lock and also the lift bridge that is after the lock, and found a mooring close to Marsh footbridge where we stayed last night. This morning we went up to turn at Grimsbury wharf and headed back to moor once again in Banbury but closer to Tom Rolt bridge. We have turned around as tomorrow Kev's daughter, Colette, her partner Ryan & Colette's son Joseph are coming to stay overnight. It is Kev's birthday on Saturday and so we will all go for a meal tomorrow night. Colette is going to Hull on Saturday to stay with her brother Lee so she is going to give me a lift home  so I can see my mam, and do some other things & also I have a funeral to go to. Dolly who was 98 tears old died on Sunday, she was lovely and her daughter Gail is a good friend. I will come back on train to Heyford train station on Monday 8th August and will be bringing my mam with me so she can stay on board for a week or so. Meanwhile Kev will be heading back to Thrupp and his friend Nigel will join him there, they are going to have a cruise back onto the Thames but will probably only get as far as Abingdon. 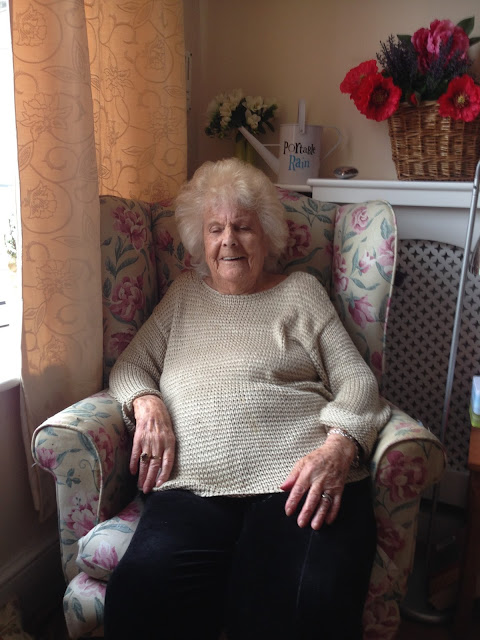 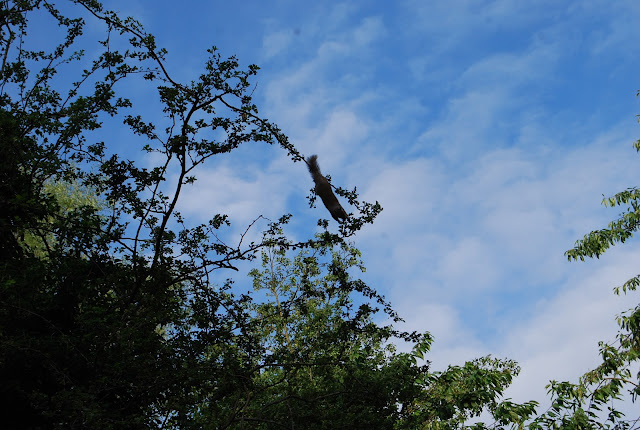 Looked out of the window this morning to see this little acrobat!