A Phantom & meeting up with fellow boaters

Friday 20th May
Firstly I have to say Happy Birthday to my daughter Kirsty, I won't say how old she is!
On Tuesday we managed to share a few locks with another boat and it was a pretty uneventful day, & we moored at Marsworth for the night.
On Wednesday morning the weather wasn't looking good,  it was raining when we were having breakfast but then it stopped briefly and we made our minds up to get our waterproofs on and leave Marsworth.  After we had got up the first of the 7 Marsworth locks  and were heading for the 2nd lock 3 volunteer lockies arrived so that was a big help, but then the heavens opened up and it was pouring with rain. Once we were clear of the 7 locks we carried on in miserable weather until we had enough and moored at Cowroast.
Yesterday morning we wanted to top up the water tank, empty the cassette & get rid of our rubbish so we left our mooring and made the short cruise to the services that were just before Cowroast lock.

When our water tank was almost full and we were nearly ready to leave 2 boats came up Cowroast lock so then it was full and ready for us to just go straight into, mind you Kev did have words with one of the boaters as he came into the lock only one gate was open so he just banged the other gate open with his boat! He told Kev he doesn't usually come in as fast as that and usually just nudges the gate open, the second boat then followed him into the lock. I thought there may be a few heated words as they were leaving the lock so I got my camera and pretended to be taking a photo of a Red Kite, when they saw the camera they were as nice as pie!
We didn't have a very long day cruising and when we arrived at Berkhamsted we moored at the visitor moorings close to the Waitrose supermarket. We wanted to have a look around Berkhamsted so I took Jaz for a walk and then we left her on the boat while we went for a look around the shops.
When we got back to the boat Jaz had pulled her bedding out and had wet all her bed! She had also done this the day before when we were travelling in the rain to Cowroast. I had been a bit concerned about Jaz as she was behaving strangely. Anyway I called my vet at home and they told me they could do anything without seeing her. Fortunately there was a vets close by so I went to see them and got an appointment for yesterday at 4.40pm. The nurse there gave me a small plastic bottle and asked me to get a water sample from Jaz and to bring it back with me when I saw the vet. This was no mean feat I can tell you, I had to use a takeaway plastic carton I had in the cupboard and when Kev & I took her for a walk I had to try to get the tray under her when she squatted for a wee! I managed a small amount then poured it into the container, we kept her out walking to try to get more and managed a couple more drops! We walked along the towpath and got to a large grassy area and was going to let Jaz have a run around, as we were approaching I noticed 3 boats moored & we recognised 2 of them Nb No Problem & Nb Seyella. We saw Geoff sat in the cratch talking on his phone so we took Jaz for a run around & then went back to see Geoff & Mags on Seyella. We chatted for a while and I had a cuppa with Mags. Geoff told us he had been looking after Nb No Problem and the 2 dogs as Sue & Vic  had gone to see the progress of their new wide beam boat being built. Sue & Vic would be back later on and so Geoff invited us for a drink in the evening. Time was cracking on by now and we needed to get Jaz to the vet, the vet was lovely and she tested the urine sample we had managed to get from Jaz and it was clear but she did say that after all that we had told her about Jaz's behaviour  that Jaz is having a phantom pregnancy! She may also come into her second season too, anyway we were happy that there is nothing wrong with her. The vat gave us some medication for her so hopefully she will get over it ok.
We didn't want to leave her alone again to go to Seyella so Geoff had said it would be ok to take her with us as there would be Sue & Vics 2 collies and their dog too. There was quite a full boat I can tell you and we had a nice time having a natter withe everyone. 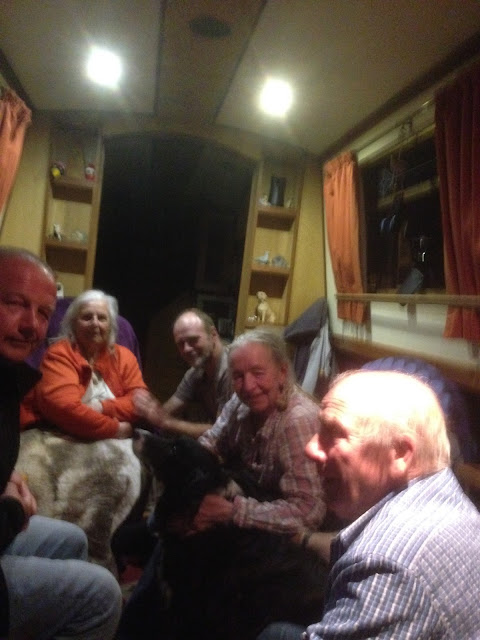 All aboard Nb Seyella!
This morning as we were preparing to leave our mooring a boat went passed heading for the lock so we managed to catch up to the boat in the lock and were able to share it with the single hander. As we dropped down and out of the lock we passed Nb Seyella & Nb No Problem, I managed to get a quick word with Sue & Vic while passing them but no sign of Geoff & mags to say bye to. We will no doubt meet up later on the Thames. Anyway we have had a long day today and managed to get through 21 locks with the other boat to share them with. John on Nb Snailspace 2 said he would stop for lunch when we did and then share more locks with us, so we moored at Hemel Hempstead and had something to eat and took Jaz for a run before setting off again. We are now moored at Hunton Bridge.