Back on The Canal & lovely weather so far

Monday 9th May
Last Thursday morning we left Weston Favell about 8am and when we got up through our last lock of the River Nene which was Northampton we moored at the footbridge where the Morrisons is and did some shopping, before making our way to the first of the 17 locks on the Northampton arm of the Grand Union Canal. 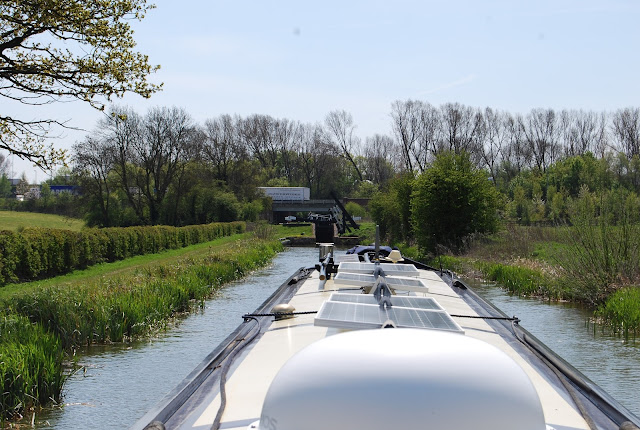 Approaching lock 12
As we were in lock 12 and Kev had started to fill the lock a woman came down to us from the next lock to tell us to stay put as there were 5 boats ahead including hers! Apparently there was no water in the pounds of the upper locks, and so we had to wait while one of the boats further up the flight let some water down so it was a slow process moving up from each lock. The sun was shining and it was very warm and the poor woman ahead of us looked about ready to drop!
We were finally at the top lock about 3pm and we just wanted to get moored for the day, we wanted to fill with water etc at Gayton Junction services but we didn't want to get to the junction to find there were no moorings so we moored opposite Gayton marina. It was very noisy with traffic from the busy road close by but we didn't care we had had enough so we got the chairs out onto the towpath with a beer or two we were perfectly happy and so was Jaz.
On Friday morning as usual we were up early and so we got ready and headed to the services at Gayton Junction about 8.15am and luckily there wasn't anybody on them so we got our water tank full once again, emptied our rubbish and also emptied the cassette. All done we left the services and turned left at the junction and headed for Blisworth tunnel. 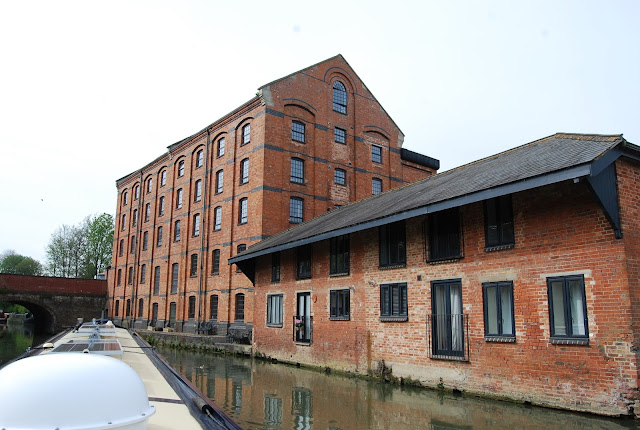 The building here used to be Pickfords but is now flats. 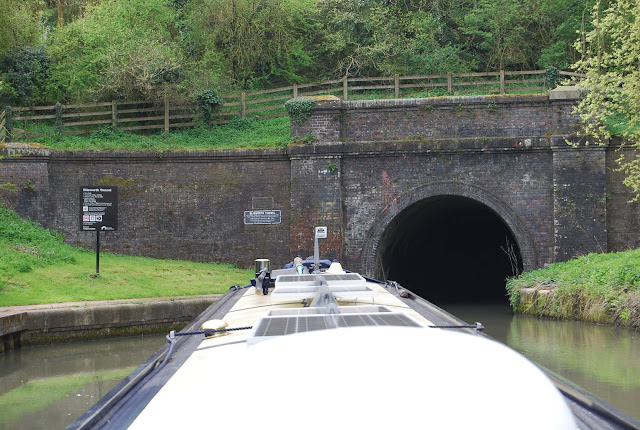 While we were going through the tunnel I stayed below with Jaz while Kev took the boat through and when we were finally exiting the tunnel not only was the boat very wet but so was Kev!
As we were going to pull over at Stoke Bruerne to moor we noticed a boat that the name looked familiar, it was Indigo Dream and we pulled just ahead of it and moored up. Richard & Sue were on board and were getting ready to leave, Kev had a brief chat with Sue and I managed to grab the camera. 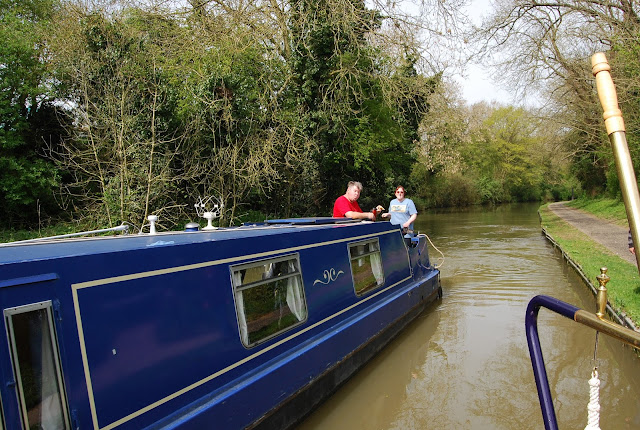 Sue & Richard just leaving.
We had a lovely couple of days at Stoke Bruerne  and we can see how it appeals to people, not just boaters, there were loads of people milling about and there was a gathering of people on the caravan site who belonged to the Greyhound rescue society. The weather was lovely too, Kev & I went to look around the museum there on Saturday afternoon and while we were inside it poured with rain! By the time we left the museum it had stopped and we walked back to the boat and we sat at the stern on our chairs and then the sky started to look a bit black so we pulled up the pram canopy and then it started to thunder then there was some lightening and the rain was bouncing onto the water. It didn't last too long but the poor people that had been walking on the towpath were drenched! The sun came out again though so people soon dried off. On Saturday night we had a walk to the Boat Inn and then popped over to the other pub The Navigation, both pubs were quite busy serving food. There is an Indian restaurant here too which is supposed to be very good too, so Stoke Bruerne seems to have a lot to offer with pretty cottages, some are thatched, there is a row of 4 cottages just before the lock which are rented out as holiday lets. We had spoken to a couple who had once visited stoke Bruerne on a hire boat and now they visit every year and stay in one of the cottages, they have even made friends with some of the villagers too. 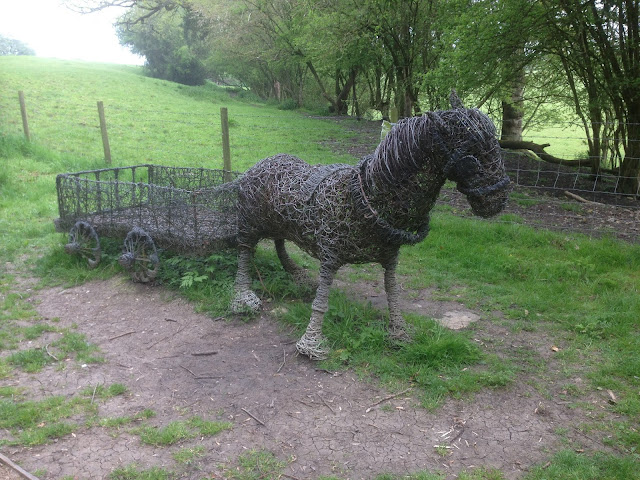 One of 3 sculptures on a walk at Stoke Bruerne
On Sunday morning we left Stoke Bruerne and Kev headed to fill the first lock of the day  and once it was full I brought the boat into the lock. The lock gates on this flight are very heavy, well so Kev said! Mind you he did get a bit of help from a man and his daughter as we were at the 3rd lock down the flight. There was too much water coming down which was making the gates even harder to open, there were 2 boats behind us coming down and by the time we were at the last lock it was impossible for Kev to get the gates open as the level in the pound was higher than the bottom gates, he had to open the paddles at the other gate to try to let water out of the pound. A woman came up to the lock, she was on a boat that was waiting to come up the lock and she asked Kev why the paddles were open, he explained the there was too much water and so in the end she went to get her husband to help with the gates. I was then able to take the boat into the lock but it took quite a few minutes more  to empty the lock as the water was cascading over the gates behind me. 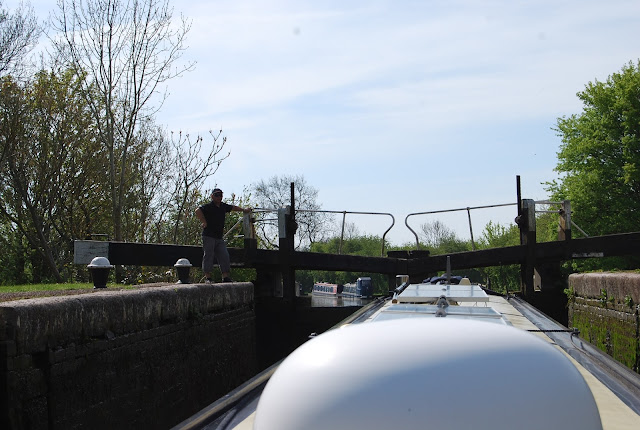 Kev at one of the locks.
Once we were finally down through the flight of 7 locks we had a nice cruise and we then decide to pull over and moor between bridges 62 & 63 and as it was another sunny day we thought we would have our first BBQ of the year! 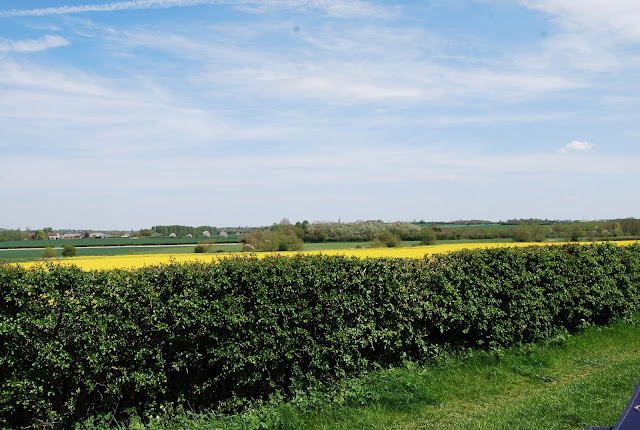 The views from the towpath where we were moored 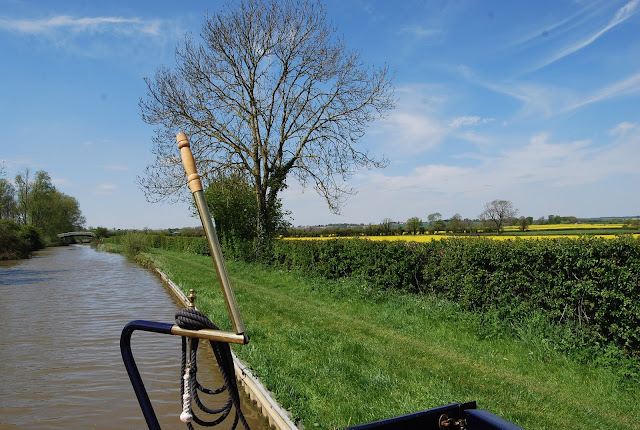 Looking back at bridge 62 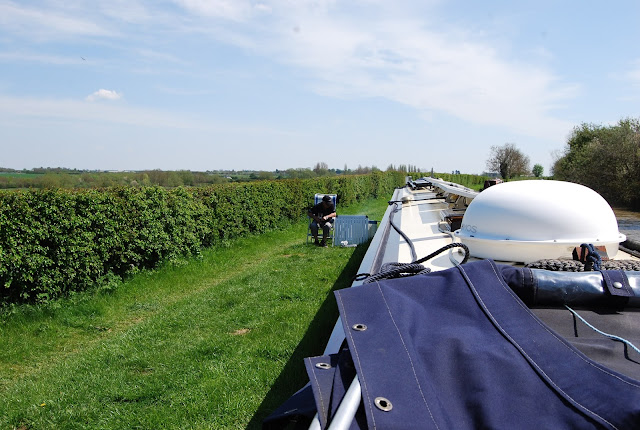 Kev watching the BBQ
It was a bit breezy so we had to use a table as a wind break while the BBQ got going! After we had eaten we sat in the sun for a while and then we decide to move on to Cosgrove where we moored after Solomons bridge 65. We had a walk with Jaz around the village, there is a tunnel that runs under the canal here and it is called the horse tunnel. Apparantly it was there before bridge 65 and it was used to take the boatmen's horses to stables behind the Barley Mow pub and also there used to be a blacksmiths through the tunnel too.
This morning we moved onto the water point which wasn't far  and as we had just finished filling a boat passed us heading for the lock close by so Kev quickly let the ropes go and he went off to the lock while I took the boat to the lock and we were able to share the lock with the other boat. When we were down through the lock the other boat went out first and they then were soon well ahead of us as we weren't going as fast as them. 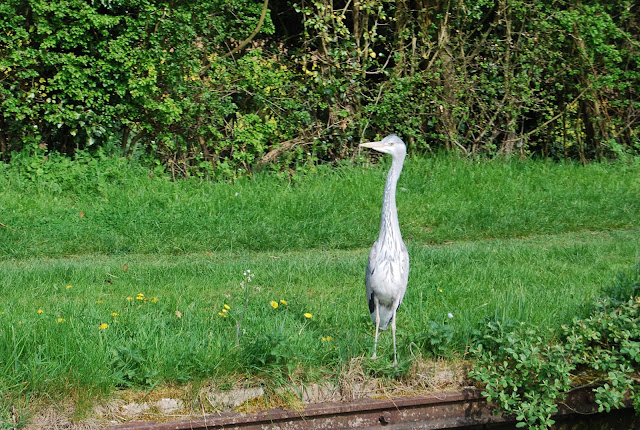 This is the closest we have been to a Heron, they usually fly off as you approach them! 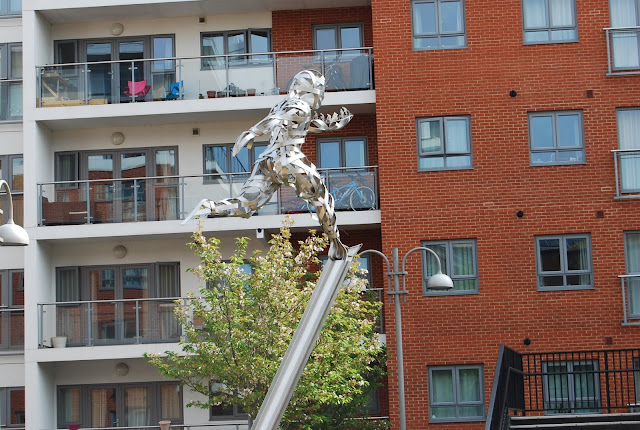 New looking flats and this sculpture near bridges 69A & 69B
It has been another glorious day and we wanted to stop at a place called Linford Wharf, the name Linford is my maiden name, but apart from that we wanted to go for a walk to the village as there was a medieval village there. We took Jaz with us and had a lovely walk and there is a really lovely pub there called the Nags Head which isn't mentioned in the Nicholsons guide but it looked very old and was another thatched property. We were very good we didn't venture into the pub but went to look at the old Alms houses. 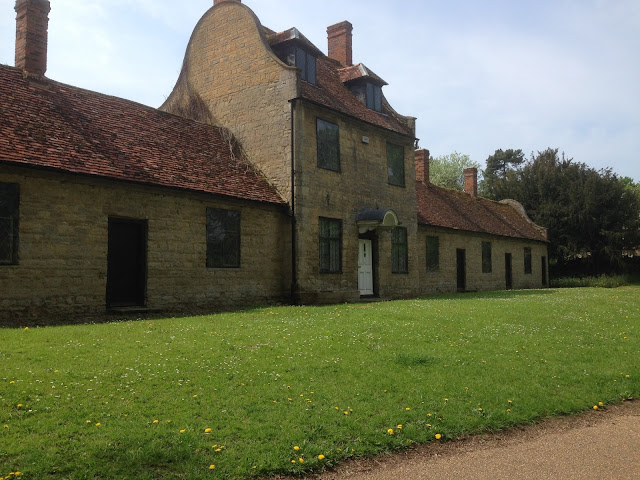 The old Alms houses
There was a medieval village here and dates back to the 11th century and is worth a look around, there is good walking for dogs too.
When we retuned to the boat we left and made the short journey to Gifford Park and moored through bridge 78. I needed some bread & milk so I popped down to the small shop 5 minutes away while Kev stayed behind with Jaz. We are staying put until Wednesday as it is forecast to rain tomorrow, but also Kevs brother Adrian is coming to see us on his way home from Dover. Adrian works for a ferry company and will detour to see us. We are booked to put the boat into Milton Keynes marina on Thursday morning as we have booked a hire car to go home for a few days. We need to stop off at Shardlow on the way home so Kev can pick up his motorbike and get it back home. We have a few things to do at home so we will be back on board on Monday.