A boozy couple of days at Thrapston!

Wednesday 4th May
After leaving Fotheringhay on Saturday morning we stopped overnight once again at The Kings Head  moorings at Wadenhoe and had a meal in the pub that night. It had been another cold night again with a slight frost on Sunday morning but the sun soon appeared and it was a bit warmer by the time we left Wadenhoe about 9.30 am.
We had arranged to meet up with Steph & Pete on Nb Maggie May, they were moored at Thrapston next to the sailing club. They had rang us  to say that the moorings were pretty full but that we could get in front of them or breast up alongside them. We only had Titmarsh lock to come up that day so the cruise wasn't too long and we were soon able to see Nb Maggie May moored with her gang plank out. We tried to moor ahead of them but it wasn't very good so we decided for the other option, and breasted up alongside them. 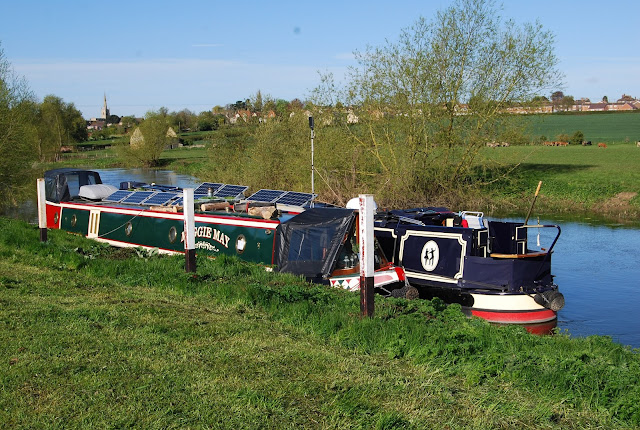 Solar panels on both boats doing their job! 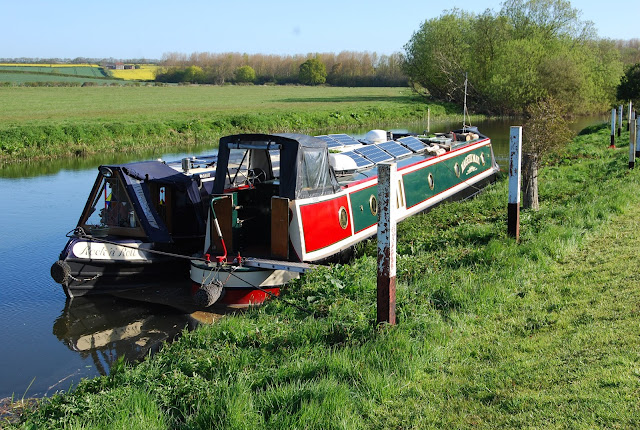 It was good to meet up again with Pete & Steph, the last time we saw them was when we were waiting to go down the Anderton Boat Lift last year. They were already on the river Weaver and were waiting to come up the boat lift, we had been walking with Jaz when we saw them so we sat on the bank with them alongside their boat.
Anyway once we were tied up safely we all had a walk with Jaz & their 2 dogs to a pub in Thrapston, where we spent a few hours having a good natter along with a few drinks too! When we finally arrived back at the boats we went onto Maggie may for a bite to eat and a few more drinks!
We all decided to stay put on Monday as it was a bank holiday and we arranged to go back to the pub around lunchtime but this time we didn't take the dogs. We had a few games of pool, all of which I won! We then had a walk to the next 2 pubs in Thrapston and then had a walk over the nine arches bridge that is over the river Nene to Islip  where we stopped at a little pub there for a drink! We walked back across the fields to the footbridge that is close to Islip lock and crossed back over the river Nene and back on board the boats again. Once Kev & Pete had taken the dogs out for a walk we returned the hospitality by inviting steph & Pete aboard R&R for something to eat and a few more drinks!
What a lovely couple of days we spent, apart from the pub and the drinking it was nice to catch up with people we like to call friends now.
Yesterday morning we were going to leave Thrapston fairly early but wanted to say goodbye to Pete & Steph so when they both were getting ready to leave Kev walked up to the footbridge which we had to go under before Islip lock, to make sure the level of the river was low enough for us to get under it. We hadn't forgotten being stuck at this lock for 4 days on our way down due to the water levels being too high and due to our air draught we were unable to get under the bridge!
Kev came back from checking the footbridge and the water had risen a bit but we were still ok to get under it so we said our goodbyes to Steph & Pete and set off. 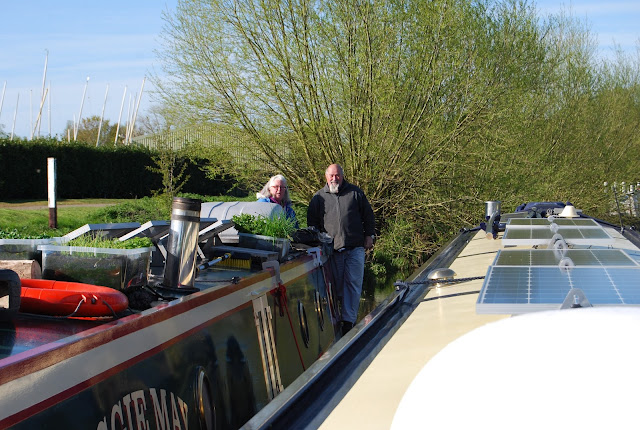 We were alone in the next few locks and it wasn't until we arrived at Irthlingborough lock that there was a boat already going up on its own so as I went up to get the lock ready they were still in the lock and they said they were stopping for lunch at the moorings  at Rushden & Diamonds which isn't too far from the lock. They were heading for Wellingborough where they were going to stay for the night so I told them that we were stopping for lunch too and did they want to share the next few locks up to Wellingborough with us, which is what we did. When we had got through Lower Wellingborough lock we left the the people on their boat and we carried on until we got up through White Mills lock and we then moored outside the new marina there.
This morning when we got up there was a frost and the ropes were frozen! The sun came out though and it wasn't long before we were leaving White Mills. We were able to take our coats off today as the sun warmed up nicely we are now moored on the 48hour pontoon moorings after Weston Favell lock. 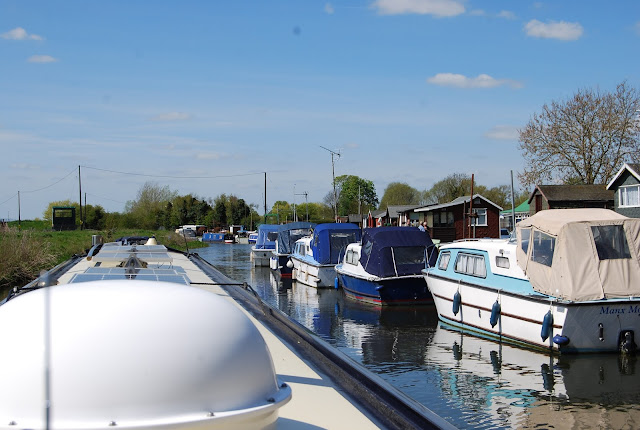 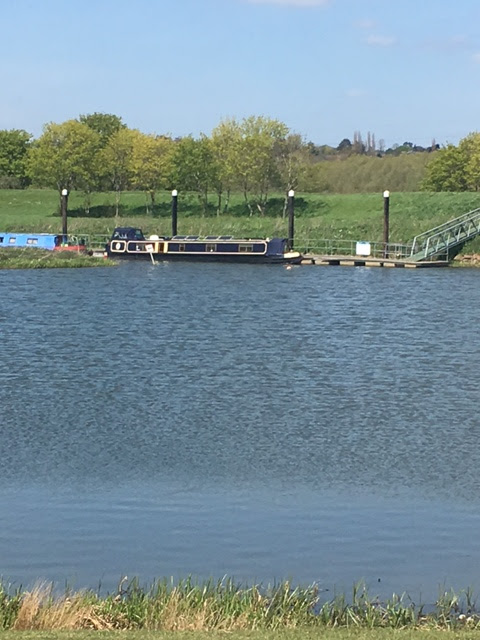 Kev took this of our mooring today