A pair of selfish single handers, a familiar boat & sadness for another fellow boater.

Friday 19th August
What great weather we have been having, on Wednesday morning we wanted to fill our water tank so we headed to the water point at Cropredy which is at bridge 153. Luckily the water point was empty so we managed to get on it ok, it was a bit awkward as the winding hole is here too and our stern was across part of it. Then another boat came through the bridge wanting water too, so he breasted up alongside of us and then low and behold another boat arrived! Then another came and was waiting inside the winding hole but he decided not to bother and so he just turned around while he was at the winding hole. It took a while for us to fill our tank as we were quite low, but once we were full we reversed and let the boat that had been breasted to us pull across onto the water point, he had the other boat tied to him so they both managed to move across together. 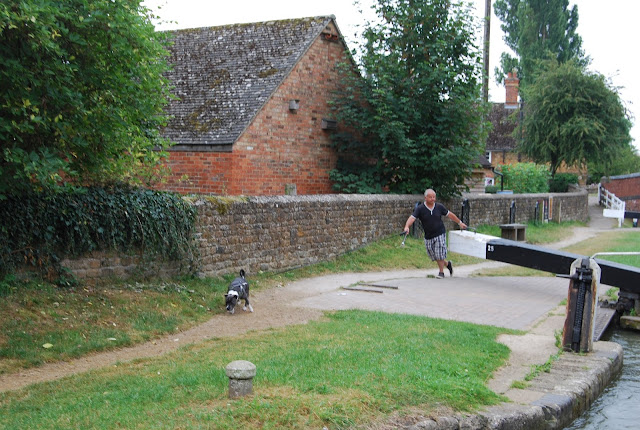 Our first lock was Cropredy. 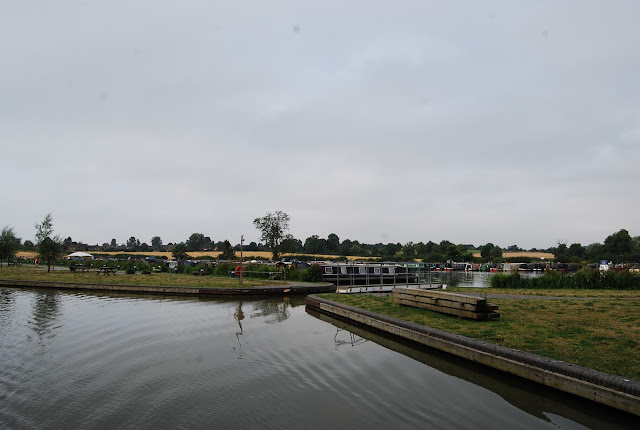 Passing Cropredy Marina.
Kev walked with Jaz from Cropredy lock to the next lock which was Broadmoor lock and then he put her back on board. Once we were through our last lock of the day which was Claydon top lock we decided to find a mooring and we did so just through Hay Bridge. Kev went on bike back to Cropredy for the car and he parked it at Fenny Compton but not in the Wharf Inn car park as they charge £5 per night! He then came back to the boat on bike and we relaxed for the rest of the day in the brilliant sunshine. 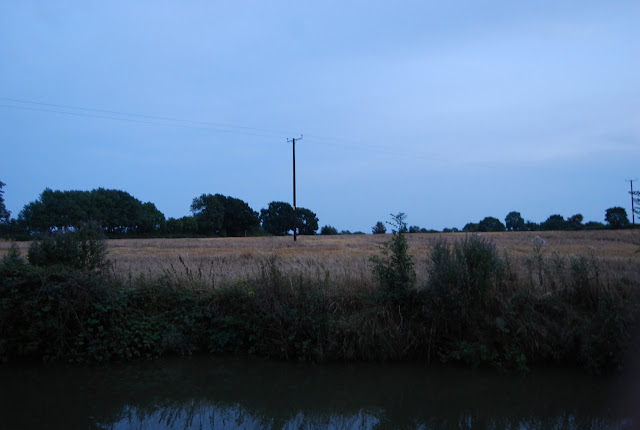 The field opposite where the combine had been working when we arrived earlier.
Yesterday  morning we left quite early, in fact it was just after 7.30 am although we werent the only people on the move so early as 2 boats passed us before we left! 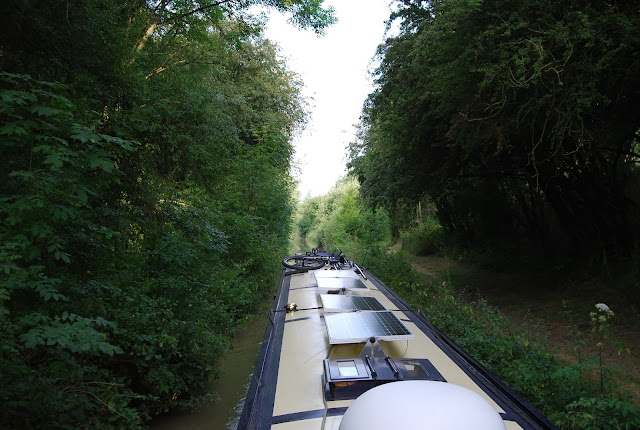 Heading through the once Fenny Compton tunnel, thankfully no boats coming the other way! 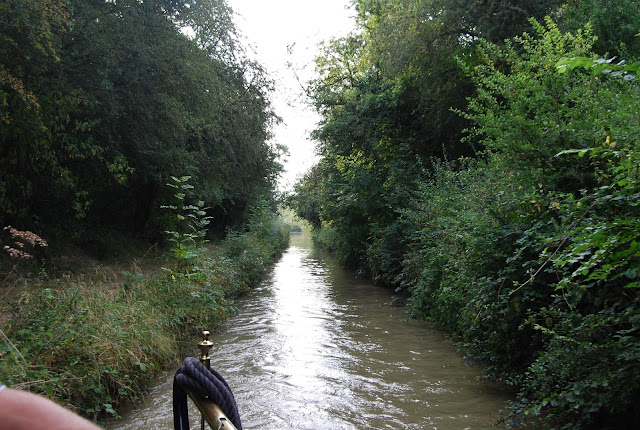 Looking back, it is very narrow.
We passed through Fenny Compton where there were plenty of moored boats but we weren't stopping there so it didn't matter to us. We continued on in the lovely sunshine until we spotted what we thought was a familiar boat & crew! 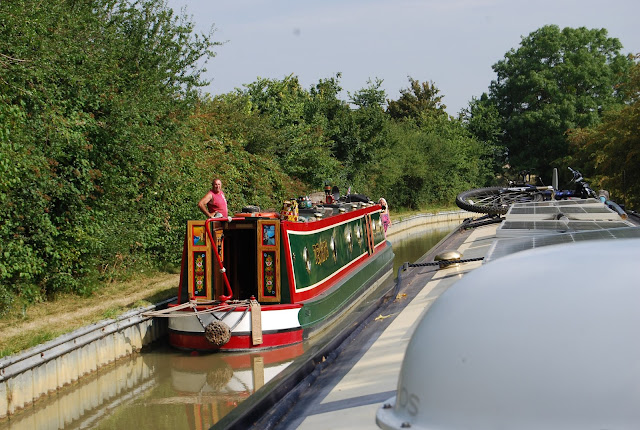 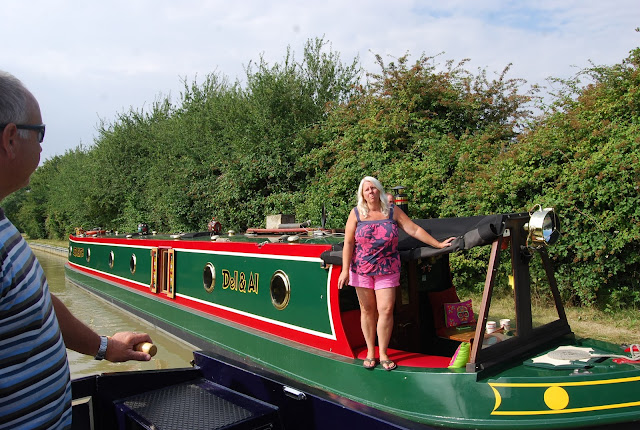 A quick chat.
As Kev was chatting I asked him to put the bow onto the towpath so I could get off the boat with Jaz and while Kev continued to chat I walked along the towpath with Jaz. Kev had to bike back for the car so he told del & Al he would see them later for a pitstop! I got back on board with Jaz and then as we were approaching Napton Top lock it was quite overgrown with trees hanging over the canal making it difficult to see ahead, so I went to the bow and the 2 boats that had passed us first thing this morning were telling us to wait as they were pulling off to go to the lock. There was a boat moored before the moorings for the lock and also a boat at the water point which is close to the lock itself. As there wasn't a lot of room we pulled in behind the boat at the water point, the man at the boat said his wife was at the lock helping people through the lock so once we were alongside I held the centre line while Kev took the windlass and went up to the lock. He came back telling me that the woman who was on one of the boats waiting to go down the lock told him that she and her fellow friend who was on the second boat didn't need any help as they wanted to work the locks themselves! So they were on two boats and both single handing, usually people single handing are grateful for help but not these two! By the time they had pratted about there was a queue of 6 boats including us waiting to got down the lock!The woman on the first of the two boats went down the lock and then tied up and came back to help her male friend down the lock! What a pair of prats! 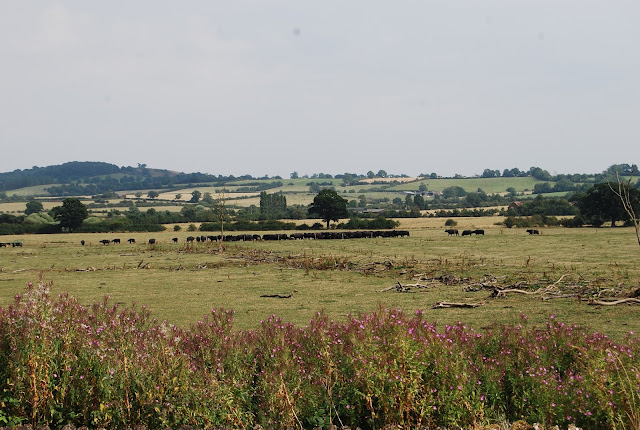 Water Buffalo, plenty of burgers there! 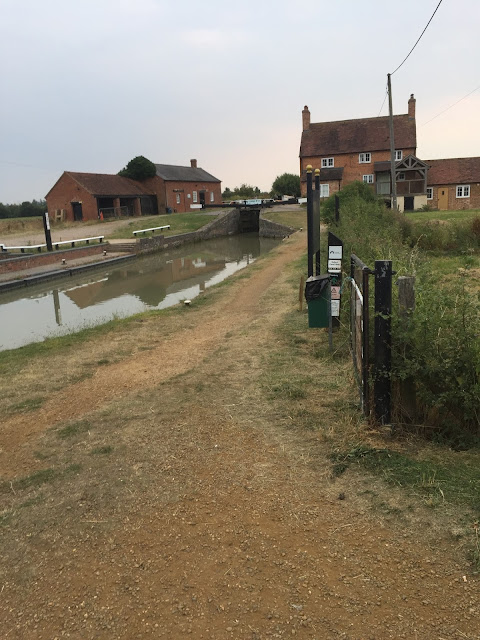 Napton Bottom Lock
Finally we were down Napton Bottom lock and were able to get moored round the bend on the 48hour visitor moorings. After I had taken Jaz for a quick walk and made Kev a cuppa, Kev got the bike off the boat roof and set off to Fenny Compton for the car which was about 9 miles!  He did manage his pitstop at Derwent 6 for a 45 minute break and then set off on the bike again only to get a puncture! Please no laughing! Anyway he fixed the puncture and finally got back to Napton around 6.30pm, so I met him at the Folly pub with Jaz and we sat in the beer garden with a lovely cold beer. Kev then took Jaz back to the boat and we went inside the pub for something to eat, and very good it was too!
Today we heard the very sad news of a fellow boater Elaine, who had died last night after a very courageous fight with cancer, our thoughts go out to her very loving husband Paul (Nb The Manley Ferry) RIP Elaine.