Sunday 21st August
Yesterday was a bit eventful, we had a ride to Daventry to "Road Pro" taking with us the control box for the satellite system, which has now stopped working. We had spoken to other boaters who had the same problem and all, including the people at Road Pro who were very helpful but said that the satellite frequencies had changed and our system needed re-programming but that they couldn't re-program our box as it was now obsolete, they did show us a system which we are going to buy it is a manual system.
We also had a leak on the water pump which Kev had thought he had resolved but it still leaked so he had taken the pump off yesterday and so we took that to Midland Chandlers at Braunston who informed Kev that although the pumps last a long time the diaphragm however becomes brittle and leaks after about 4 years. Kev was going to buy a new pump @ £87, but the man in the chandlers told him just to buy a new diaphragm kit £32! Result a saving of £50!
When we got back to Napton and back on the boat Kev changed the diaphragm and it is now working properly! Kev also had to repair the punctures on the bike as there were several in both tyres! He did change an inertube on one of the tyres though.
After the bike was sorted he decided to ride along the towpath and take it to put back in the car, he hadn't been gone long when he returned with the bike.... Kev was dripping with water! He had been riding along and looked down at his jeans thinking he had got oil on them from the chain, big mistake as he ended up going head first into the canal and the bike was hanging slightly into the water!
As he stood inside the stern dripping from head to toe I told him to get his clothes off and go get in the shower. 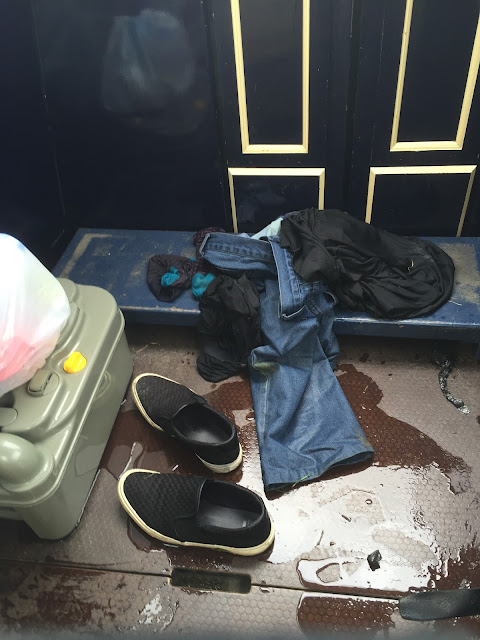 Kev's dripping clothes!
Quite an eventful day, so after his dip in the canal he had to have a cold beer so we both had one. Later on in the evening we had a walk to The Folly Inn as there were some bands on as it was "FollyFest"and there were quite a few people there although it took ages to get served at the bar inside and the outside bar had ran out of bitter, as it took so long to get served we got 2 pints each and took them outside. I don't think the event had been organised very well as we couldn't see the band that was on at the time as they were in the same tent as the outside bar so it was quite full. I think the area for the bands should have been separate and that way everyone could see them.
This morning we decided to move from Napton as Kev wanted to get some maintenance done, so I took Jaz to the car after Kev had set off on the boat. I parked the car at bridge 104 and walk with Jaz heading back towards Napton to meet Kev and as I had passed bridge 108 he rang to say he wasn't far from me and so when I saw him appear on the boat I waited on a straight section so he could pull over to pick both me & Jaz up. One aboard we didn't travel too far and when we got through bridge 103 we were going to moor but there were a few boats there already so we carried on a bit further and moored before the bend at bridge 102. When we had seen Del & Al they had told us that the moorings were good after bridge 103 and we were hoping to meet up with them again. Once we were moored up I left Kev to walk with Jaz back to the car at bridge 104 and i drove it back and parked at bridge 102 to be closer to the boat. Kev had got the Satellite dome off the roof and had started filling the holes were it had been mounted on the roof, he then took it to the car ready to take it to the tip. So he has quite a bit of painting to do, weather permitting. 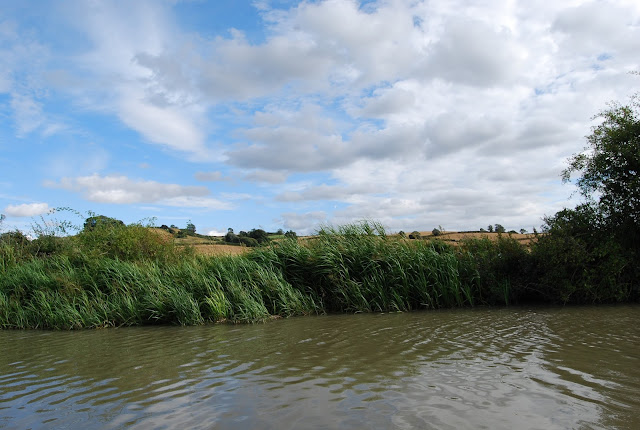 Looking across from our present mooring.
Posted by Unknown at 09:59