Moored at the Anderton Lift

Tuesday 8th September
Last Thursday we came up the staircase lock at Bunbury with a hire boat and shortly after we had left the top lock we were able to moor near Calverley for the night and on Friday morning we headed off towards Barbridge junction once again but this time we turned left onto the Middlewich branch of the Shropshire union canal. Just as we were leaving Minshull lock we could see a boat coming towards us so we left the gates open for them Kev walked towards the bridge so I could pick him up and the woman off the boat coming towards us had got off her boat and was walking to the lock, she had a camera and took a photo of R&R and she told me she read our blog, then as her boat came passed me I recognised the name as they too do a blog they were nb Muleless, but yet again no photo!
As we were moving along Kev asked me if I wanted to got home for the weekend to see my mum & check on the cottage & see if we had mail, and so he rang Entereprise car hire at Northwich to see if they had a car available. He provisionally booked one for me and said he would ring them back once we were moored to tell them where to pick me up, so I went to wash my hair and sort a few bits  to take with me and in the meantime a boat appeared behind us and as Kev was approaching bridge 20 there was a mass of weed in the bridge hole and we got well and truly stuck on it! We couldnt move and Kev got the boat hook to try to free us and the weed was so thick we were grounded on it and Kev said it was on the prop too. The boat behind us saw that we were in bother so they tied their boat up and both came to help us and they were really lovely and they helped Kev pull R&R back through the bridge to see if the weed would free itself from us but it never moved! So in the end the man got back on his boat and put a rope on his bow and we tied it to our stern and he was able to pull us free, Both myself and the woman off the other boat managed to use our poles to pull the weed out of the way so we were able to set off again! This took us a good one & a half hours and I didn't expect I would be going anywhere for the weekend but we got to Middlewich and moored at bridge29 and we rang Enterprise up and they said they would pick me up at 4pm outside Kings Lock pub. I would like to thank the couple who helped us they were on a boat called Lest We Forget and they were fabulous to stay with us.
I managed to get home for the weekend and on Sunday morning Kev rang me to say that he was witnessing a distressing sight outside the boat, and there were men from the Envionment agency there! The pound was full of dead and dying fish and the men were trying to save the fish that were gasping for air by trying to let them down Wardle lock onto the Trent & Mersey canal, Kev asked why this was happening but they weren't sure but said the oxygen level in the pound was 3 per cent and on the Trent & Mersey it was 80 per cent! Kev was speaking to a couple of residents there and they said it has happened before but wasn't as bad as this, they said they thought that it was caused by a farmer further back on the canal who they think pumps effluent into the canal, the Environment men said they couldn't prove that this was the case but anyway the poor fish are dead and Kev said it was awful to see a lot of them gasping out of the water for air.
I got back to meet Kev & Jaz at Kings lock pub yesterday morning at about 11.15 am and we drove to a bridge nearer to the boat so I could unloaded the hire car and once we had got my things on board I had a cuppa and then went back to Enterprise at Northwich and then was driven back once again to Kings Lock. I have to say that the staff at Enterprise were lovely and very helpful. Kev and I sat and had a swift half in the pub beer garden and then got back to R&R and we then left our mooring and made our way down waddle lock turning left onto the Trent & Mersey canal, it was a lovely sunny day and we had a nice cruise, we spotted a boat moored at Bramble cutting so we decided it looked so peaceful that we would moor there for the rest of the day. 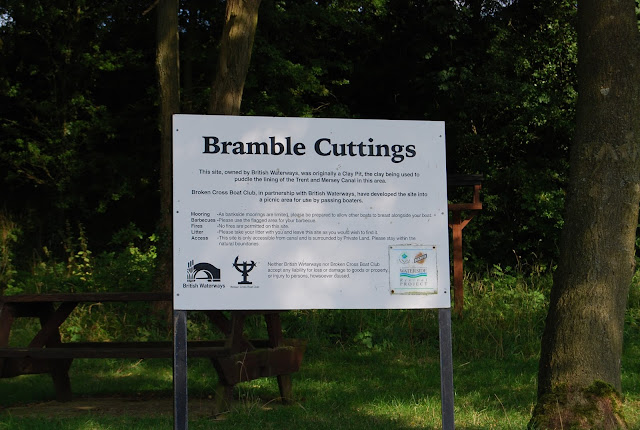 It was such a lovely day we set up the BBQ and sat on one of the picnic benches there to eat our tea.

This morning we left Bramble cuttings mooring just after 8am and headed off and yet again it was a lovely sunny cruise. 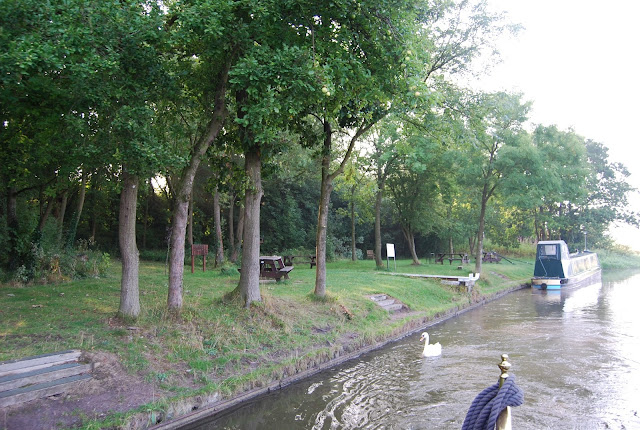 Leaving this morning
We stopped briefly at the services at bridge 198 near Anderton marina and then carried on for the 24hour moorings just before The Anderton Lift, just before we moored we passed a boat we recognised Nb Chance moored on the 48hour moorings. 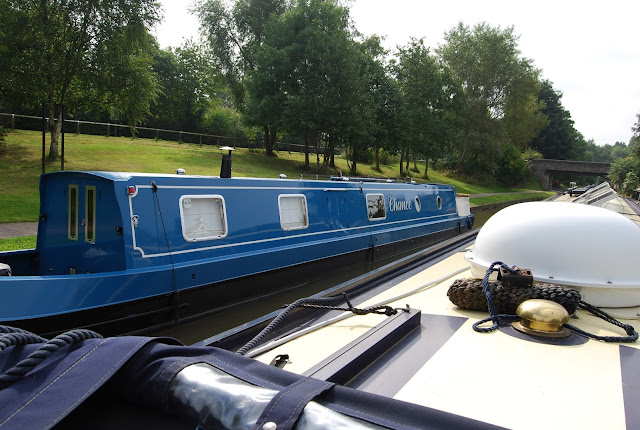 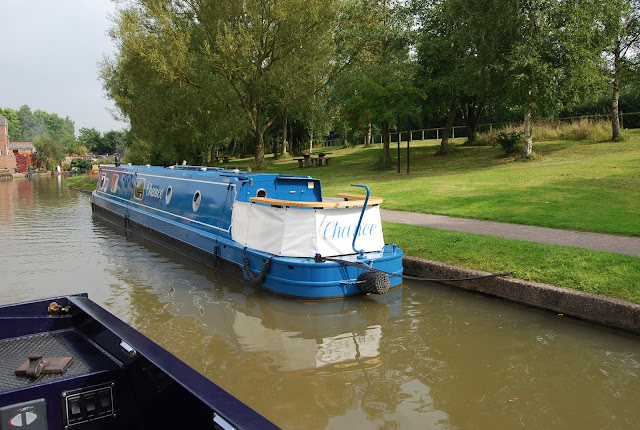 Nobody aboard!
Once we had moored we took Jaz for a walk and Kev booked us a place on the boat lift for tomorrow morning so we will be on the river Weaver. We could have gone down today but we want to go for a meal in the Stanley Arms as we haven't been there for about 10 years! The last time we were there was on a hire boat with my mam & my now deceased dad so although it isn't going to be the same we felt we couldnt come here and not go in the pub! (good excuse eh!) We had a walk down to the river and to our surprise we met a couple that we haven't seen since we were on the Soar last year and they were moored waiting to come up so we are all going for a meal later. Steph & Pete Nb Maggie May gave us a beer and we sat for a while chatting it was really nice to see them both again.
Posted by Unknown at 07:58