Now moored on the Macclesfield canal

Tuesday 15th September
While I was writing my blog on Saturday afternoon Kev took Jaz out for a walk and when he came back he said that he had heard an ambulance as he was leaving the boat with jaz and as he walked back through the bridge, he spoke to a man from a boat that was moored there and he told Kev the ambulance was for a man that was on a boat that hit the bridge and then the other side of the canal before falling into the water! The man had been drinking but we weren't sure if it was due to the drink or that he had suffered from something else that had caused the accident, Kev was told that paramedics and the man from his boat had to get the man (who was quite a large man)out of the canal  and then an ambulance took him to hospital while a few other people managed to moor his boat up for him. On sunday morning I walked up to the boat to check it was ok as it was on pins and I noticed the front pin was coming out so I called at the boat behind him to ask how the man was who had the accident. He told me that the man was back on board and was fine and that he would be leaving shortly so I left and went back to R&R and at 10.30am Kev & I went to have a look around the Lion Salt Works Museum. Opposite the entrance is the Salt Barge pub and we had been for a couple of pints & a few games of pool on Saturday night, and it is a lovely old pub. 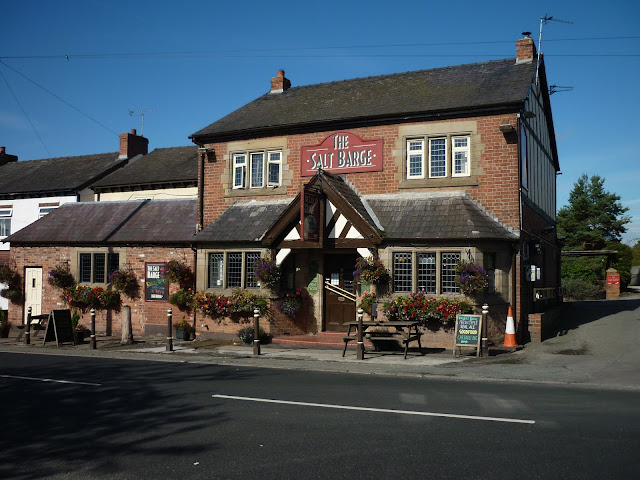 We went into the museum to pay and we both laughed as we were told that if we were over 60 years we were entitled to a concession! So we got £1 off !! Mind you it was well worth the money and very interesting. It used to have a pub on site called The Red Lion and it was used by the workers there, here are a few photos... 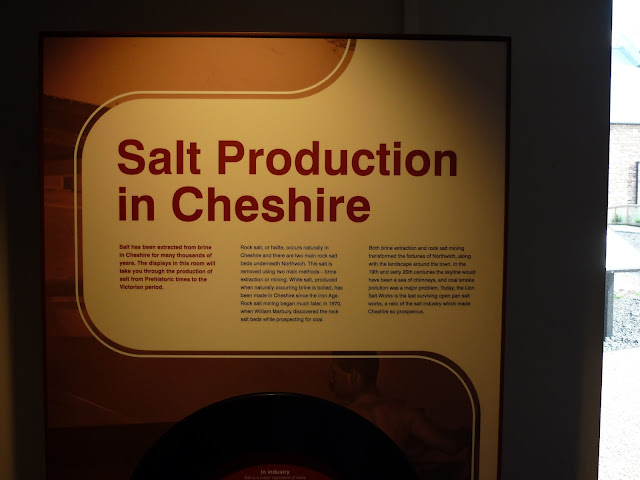 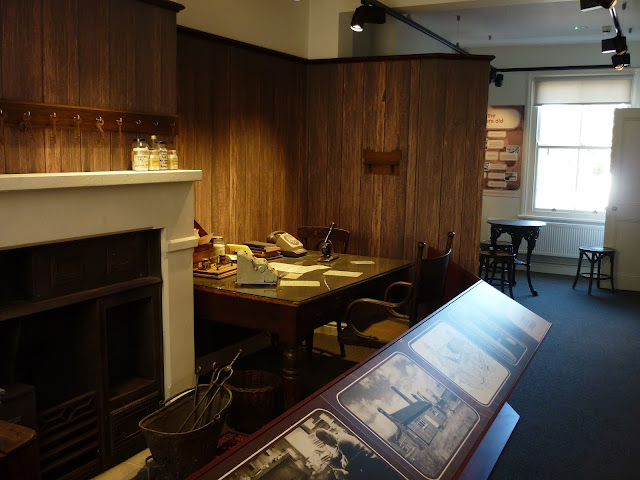 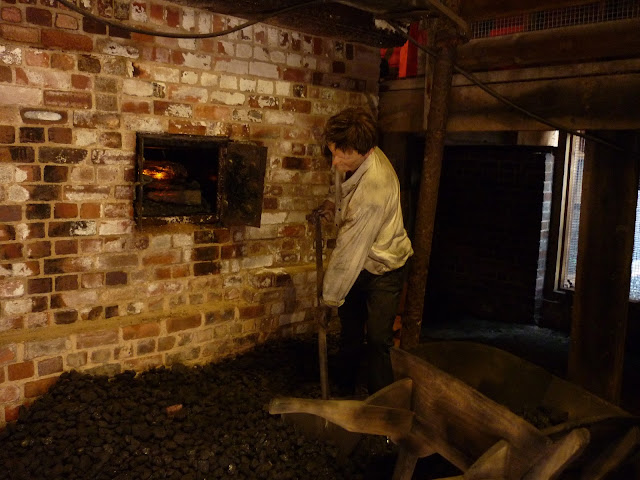 Coal used for heating the brine 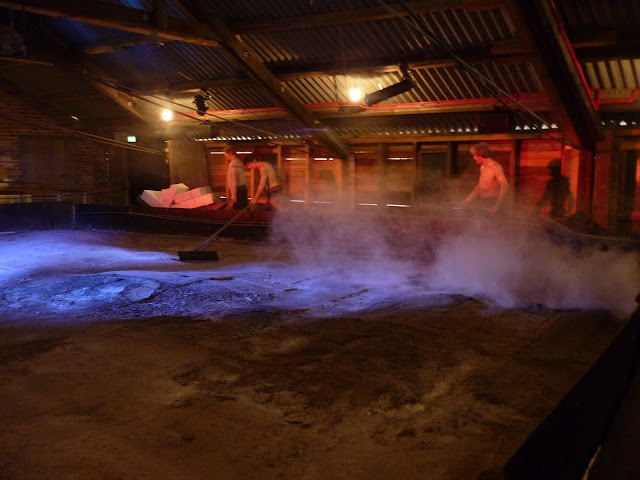 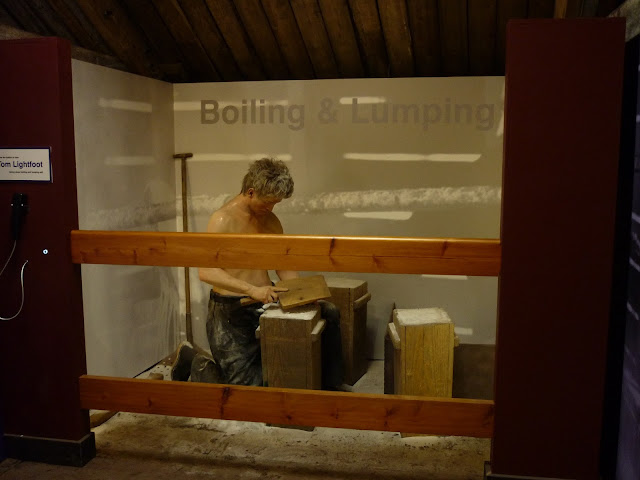 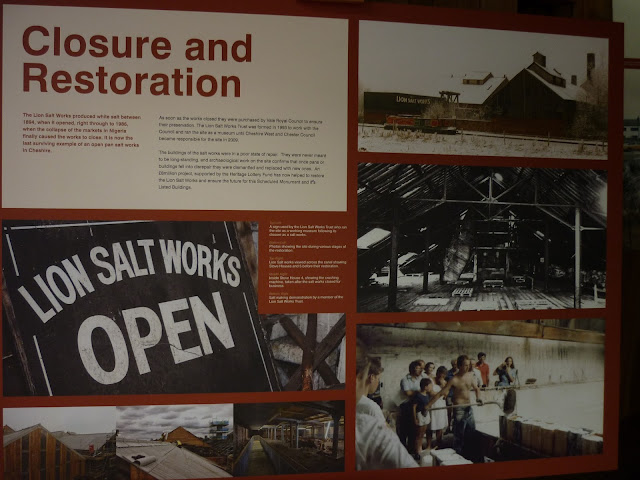 When we had finished at the museum I took Jaz for a quick walk while Kev got ready to leave and then we were on our way and when we got to Kings Lock at Middlewich we saw Nb Maggie May moored outside the boatyard and as I went to set the lock Pete and Steph were coming out of Kings Lock Pub! What a surprise! Anyway they both helped us up through the lock and we managed to get moored on the visitor moorings above the lock, once we we all sorted we took Jaz with us for a couple of pints with Steph and Pete and she was quite well behaved. We wouldn't usually moor here as the road is very close by and it is busy.
Yesterday morning we got away from Middlewich about 8.45am and the weather was a bit miserable. 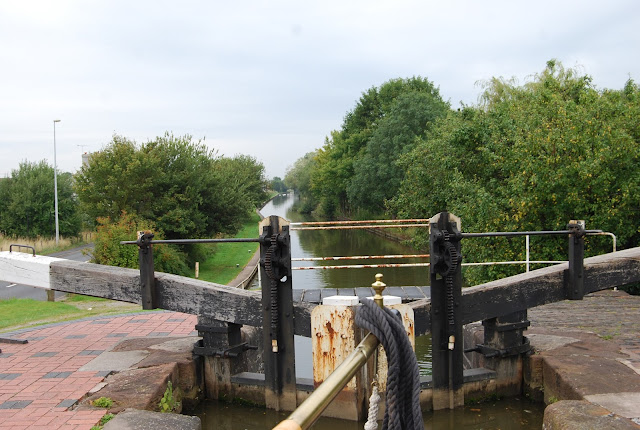 A bit brighter at Rumps lock 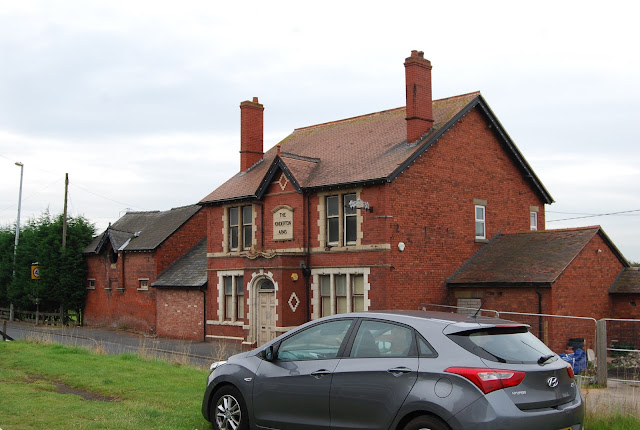 The Kinderton Arms opposite is having work done

We wanted to stop at Wheelock as there is a very good Pet store there and I wanted to buy Jaz a new bed, we managed to moor up after the water point on the 48 hour moorings, we both had a walk to the pet store with Jaz and we noticed the fish & chip shop was open so once I had been to get the bed for Jaz I took her back to the boat while Kev got the fish & chips. Not the best fish & chips we have had but they were ok so once we had eaten and washed up I walked unto the first lock in the Wheelock flight and when we got to lock 63 one of the locks was closed as they were going to put a new gate on the lock nearest the towpath but the lock next to it was fine. 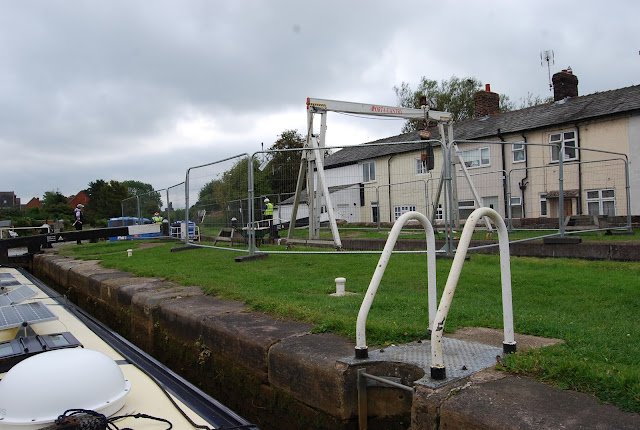 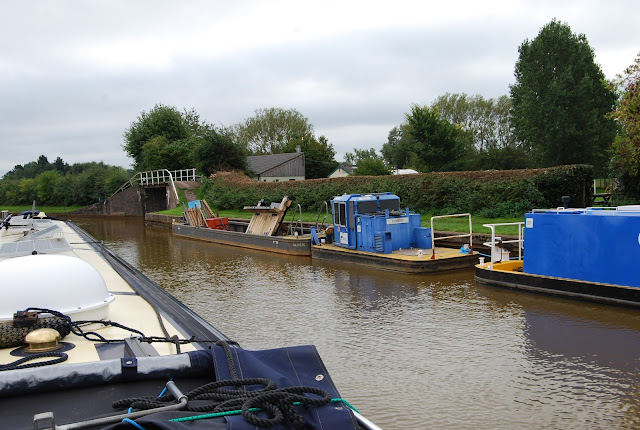 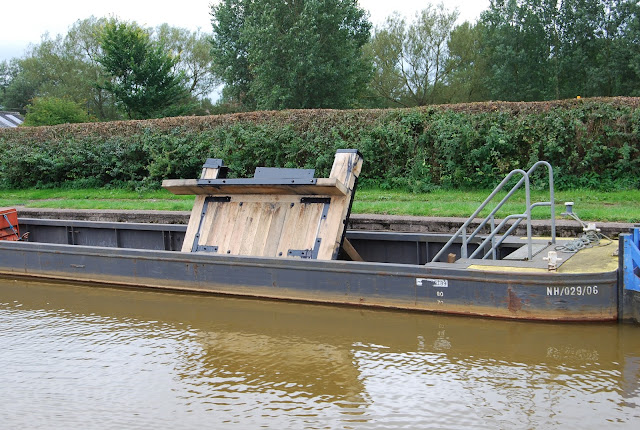 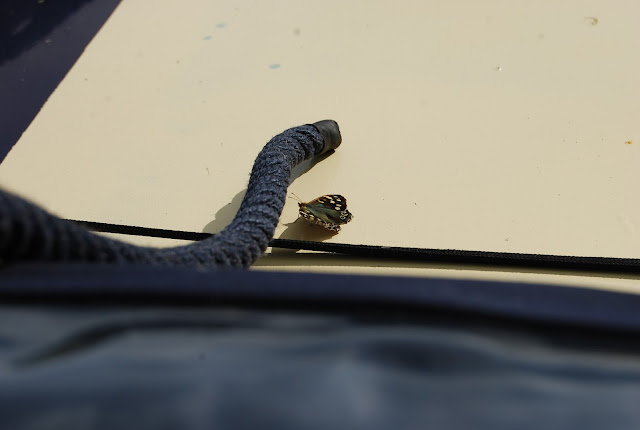 A passenger flew aboard
By the time we got to Thurlwood lock it started to rain and we called it a day at Rode Heath, there were quite a few boats moored here and we ended up going through the bridge at the Broughton Arms pub and moored up and it absolutely poured with rain so we were glad to have stopped for the day.
This morning it was still raining but not as heavy in fact it was only light rain and by the time we left Rode Heath it wasn't too bad although we did have our wet gear on but at times it stopped raining and was actually quite nice. 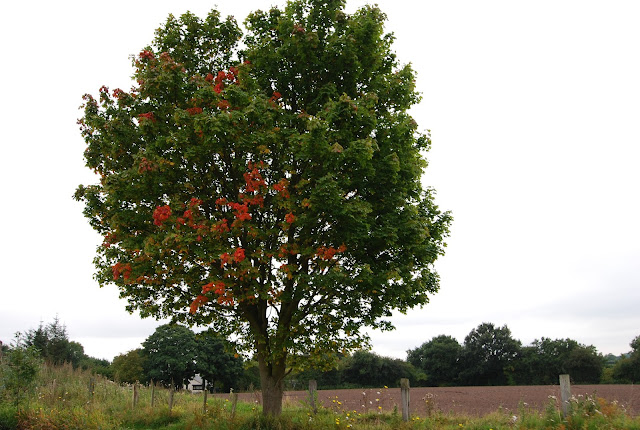 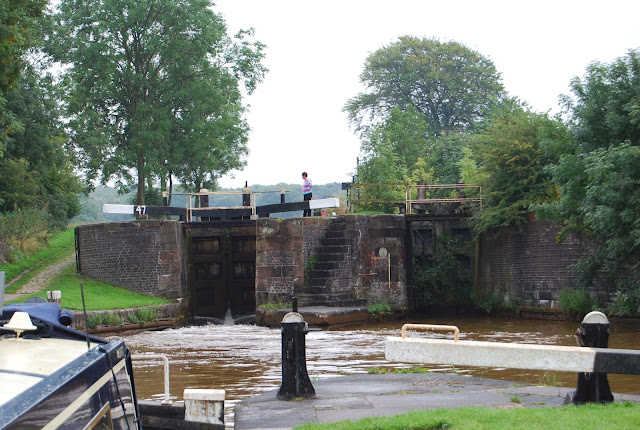 We had a good system going I would open the paddles for Kev to come up then I went to the next lock to empty it while Kev came out of the previous lock and closed the paddles & the gate then by that time the next lock was ready for him. We carried on and stopped for something to eat after the Red Bull services and then we carried on and turned onto the Macclesfield canal and had a pleasant cruise and once we were through Congleton we moored between bridge 73 & 72 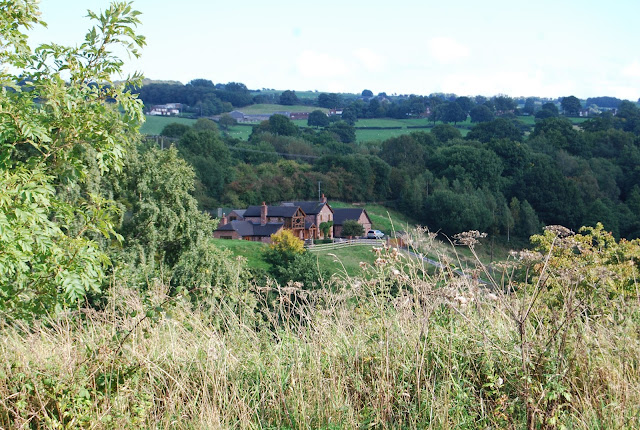 The view on one side of us 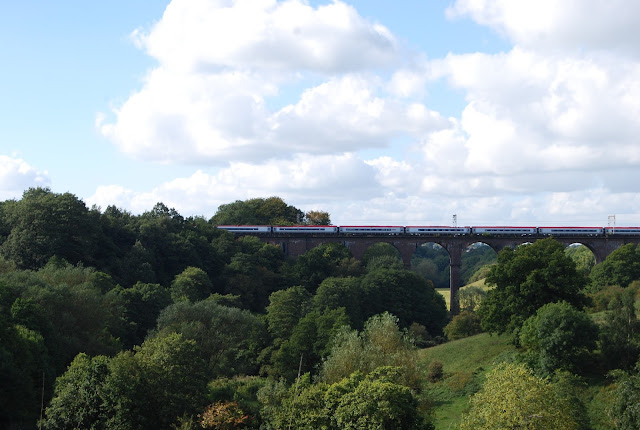 The view on the towpath side 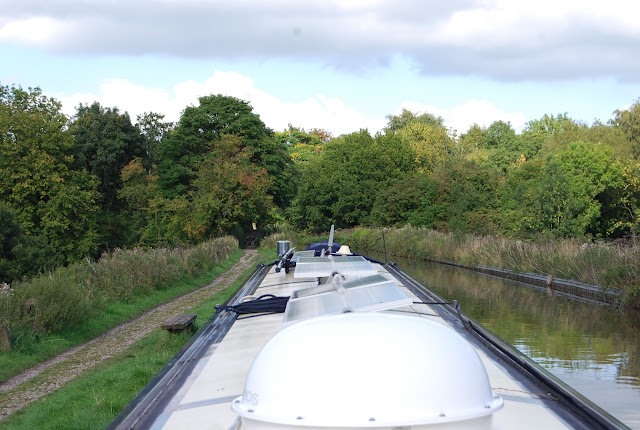 And the view ahead!