A Chance meeting as we approach Folly Bridge!

Wednesday 13th July
We had a lovely couple of days at Abingdon, but this morning we left quite early 7.15am!  We wanted to fill with water and the water point is above Abingdon Lock and as there has been quite a few boats queuing there during the past couple of days so we thought we would get there before any other boats were on the move. We are usually up early anyway but not as early as some people who were in the open air swimming pool at 6am! 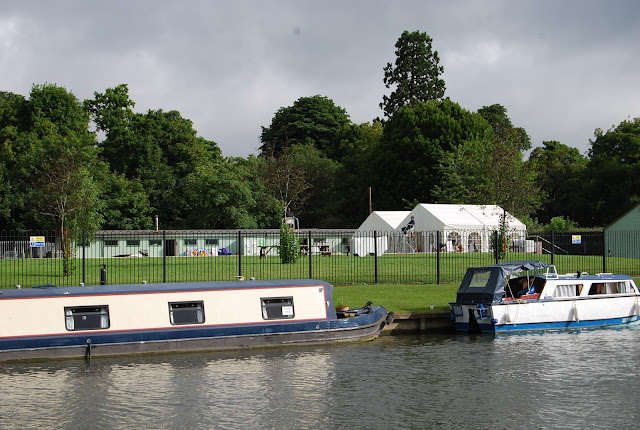 The swimming pool opposite our mooring.
Yesterday afternoon a boat passed us and turned to moor on the opposite side, it had a familiar name... 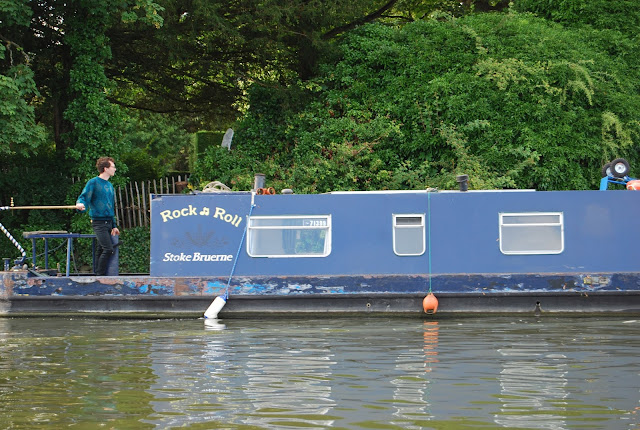 I walked to Abingdon Lock this morning with Jaz  to get it ready for Kev who stayed aboard R&R following me slowly so I had chance to get the gates of the lock opened for him to come in. The lock was on self service as once again it was too early for the lockie to be on duty. By the time we were at Sandford lock there was a lockie on duty. 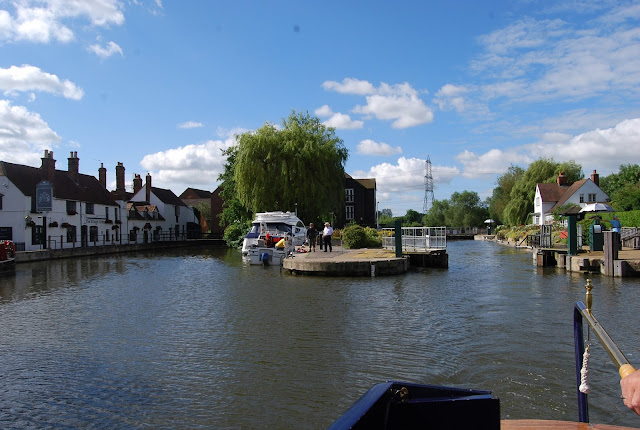 Leaving Sandford lock, The Kings Arms is on the left of the lock. 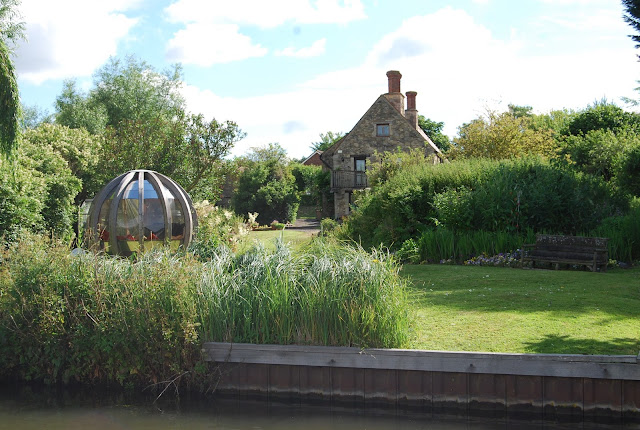 Another round summer house, I do like these but I expect they are really hot when the sun is out!
Whenever that is! Mind you the morning did start out really nice and it was pleasant cruising. 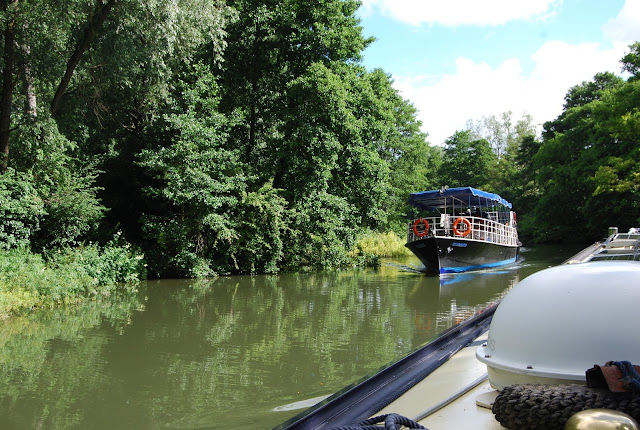 The trip boat Goring appeared from round the corner 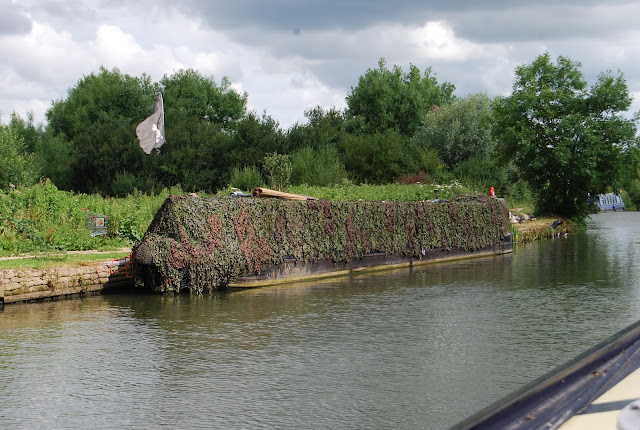 My goodness whats this all about! 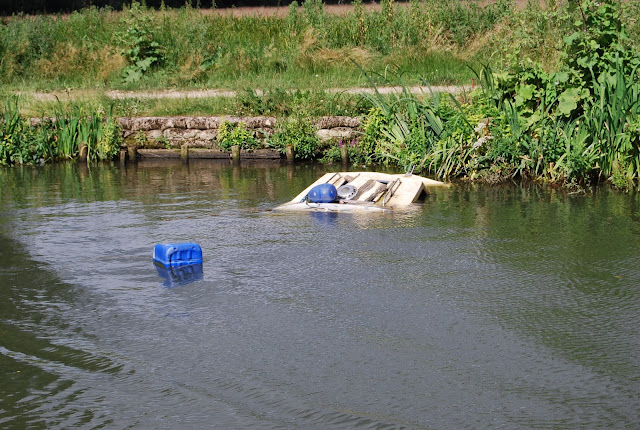 Whoops, not much of this little cruiser above the water. 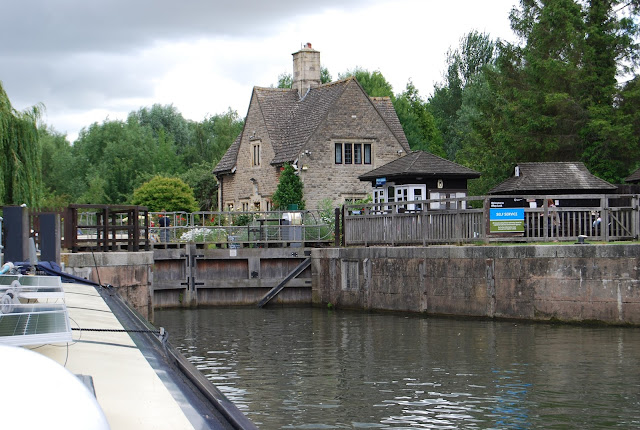 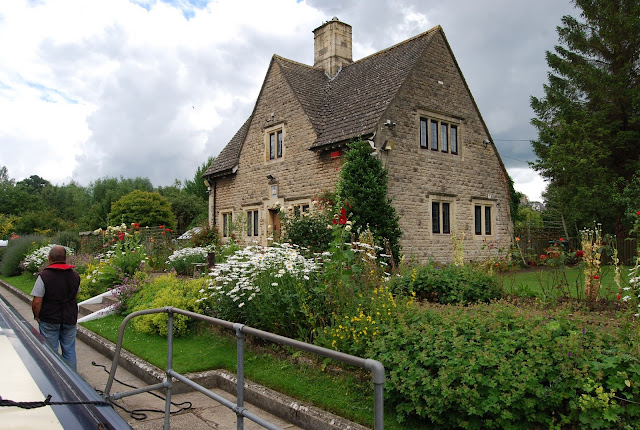 It started to look  like it may rain as the clouds started to thicken but we only had a few drops of rain but nothing to write home about. As we were approaching folly bridge we slowed down as we couldn't quite see through the bridge as there was a trip boat moored close by but as we were nearly at the bridge we saw two people waving to us, we thought they were just gongoozlers that you usually see at some bridges but the man shouted to us that they follow the blog & also he knew Kev! We couldn't stop but as we got through the bridge Kev realised  that he knew the man too but couldnt remember his name. The man & his wife had come to the other side of the bridge and the man shouted to Kev his name was Kev Hartley. Well what was the chance of meeting someone from over 30 years ago that Kev had worked with on Humber Pilot Launches! Going under a bridge in Oxford!!
Anyway we got up through Osney lock and there was a boat waiting to go down and as we passed them they said if we wanted a mooring, they had just left one and so we managed to get into their mooring space outside The Punter pub and as we were tying up who should walk along the Thames path but Kev Hartley and his wife Jeanette! They were on holiday in their caravan and were actually on a camp site at Abingdon! They were doing a 7 mile circular walk then would get a bus back to the camp site. We invited them on board for a cuppa, yes a cuppa not a beer! They stayed for about an hour and a half with both Kev doing lots of catching up. Kev & Jeanette follow Sue on Nb No Problem & now WB No Problem XL, they are keen boaters too and have hired several boats but are looking to buy into a shared ownership boat. Kev is still working but hopes to retire as soon as he can so look out for them on the cut! 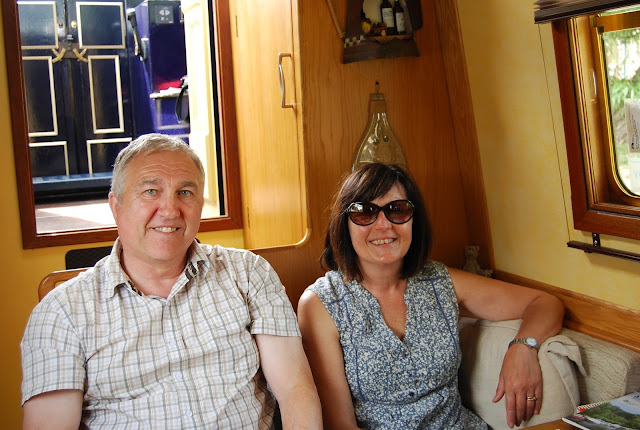 Kev & Jeanette
Lovely meeting you both and what a lovely natter we had with you both, before they left Kev gave them a look around R&R and they seemed to like it.