After a final circular walk on Wednesday morning through Burston  & back onto the canal at bridge 86, we got back to R&R and had a cuppa and then left to make our way to Sandon Lock. I got off the boat and filled the lock but no way could I open the gate and so Kev told me to get on board and he would open it! Well he couldn't open it either so it took both of us to do it! We don't know why it was so hard to open but wondered if the other gates were leaking, but anyway were down and through the lock in the end! 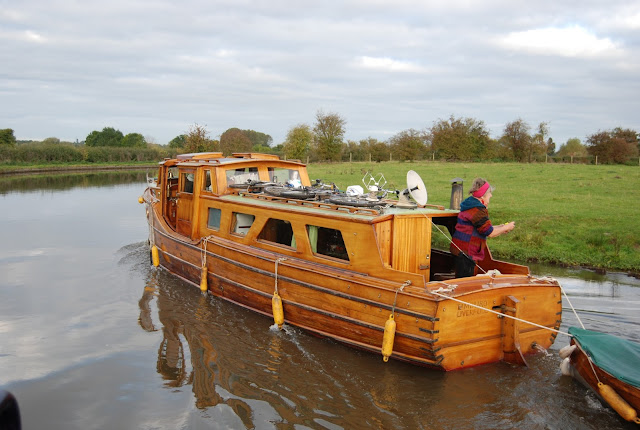 When we arrived at Gt Haywood we moored at the water point at Anglo Welsh, while Kev was filling the tank etc I walked into Gt Haywood to the Spar shop and when the water tank was full Kev set off onto the Staffs & Worcester canal and moors at Tixall wide, I then walked back along the towpath and arrived at the boat as Kev was putting the canopy up. Yesterday morning Kev washed the towpath side of the boat and later he waxed & polished it with a machine polisher while I held the electric cable to prevent it dropping into the water! All done & looking good, we then had some lunch and then we left and turned around to head back to the junction and back onto the Trent & Mersey canal. 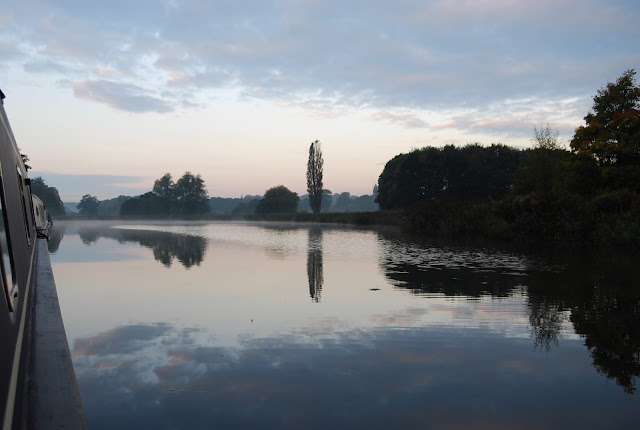 Looking across Tixall Wide in the morning. 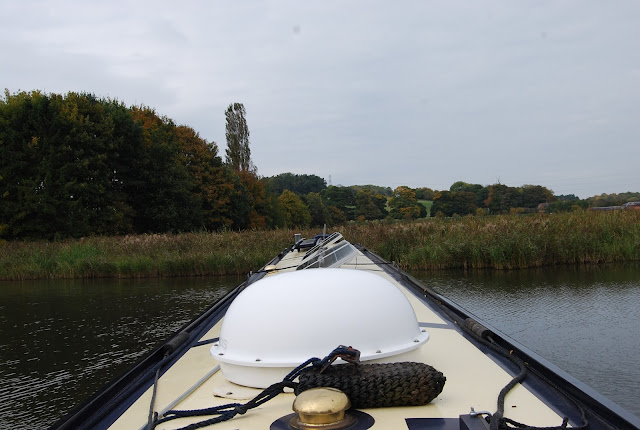 Turning around.
Once we were down Haywood lock we moored  on the moorings across from Shugborough Hall. Yesterday afternoon we had a walk to The Clifford Arms for a couple of beers as we wanted to see the menu for Sunday lunch (good excuse for a beer?) We got chatting to some locals and we were told that the pub doesn't do a Sunday roast but that the Ham & eggs were good, we wanted a Sunday roast not Ham & eggs even if they were good, so we had a change of plan altogether. This morning  before we left Gt Haywood, Kev had been chatting to a local man who told him that the Indian restaurant "Shimla Palace" at Wolseley bridge was once a pub and that it was once visited by Oliver Cromwell and that there is a tunnel under the restaurant that leads all the way to Shugborough Hall, and was in use at the time Oliver Cromwell was plotting to take over.
We are now moored just before Wolseley bridge 70 and our new plan is to have an Indian tomorrow night instead of going for sunday lunch. Not much difference! But it is a really good Indian.
Posted by Unknown at 04:20