Wednesday 19th August
We took Jaz to the vets as I had said previously with the itching and rash she has. I must admit the veterinary practice was very good and the vet was lovely too, he gave us antibiotics and also I had wondered if she had a mite and he said he would cover everything and gave me a sachet of Stronghold to put on the back of her neck to eliminate the chance that she had a mite. Also I said she had previously had a steroid injection and he did say that it may have been too much for her and that he would give us steroid tablets so she could have them slowly and as she is waking up in the night scratching he gave me some Piriton tablets and she is to have one in the evening and this will make her drowsy and help her to sleep and will stop her scratching for a while! So hopefully we will get her sorted! Thanks for your comment Carol we hope to catch up with you & George next year as we hope to be heading for the Thames!
Kev went to the chemist to get something to help his eye get better while I returned to R&R with Jaz and after a cuppa I went to the lock to set it for Kev. Yesterday when we arrived at Penkridge we managed to tuck in between two boats and Kev spoke to the man on the one ahead of us and he showed Kev his engine on his boat which he informed Kev was only one of eight steam driven narrowboats in the country but Kev didn't get a photo of the engine. The man told Kev that the boiler needed stoking with coal every half a mile! 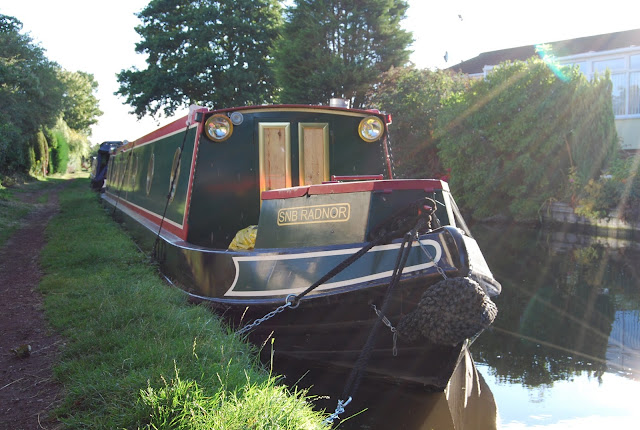 This is SNB RADNOR
We went up through Penkridge lock and stopped at the services that are situated just after the lock where we emptied the cassette,filled with water & got rid of rubbish before heading off for Gailey.
The weather was holding on and we didn't get any rain although it got a bit breezy, after we had got through Otherton Lock the canal got quite shallow and the levels in the pounds seemed to be down a good 6 inches and as we were approaching Rodbaston lock we noticed there seemed to be some orange mesh along the lock landing so Kev put the bow to the towpath and I jumped off and as I walked towards the lock 2 CRT men came walking along they were in the process of cordoning the whole lock landing off from being used. Mind you it would have been very dangerous to try to tie up on the lock landing or even get off as all the concrete with the bollards on had collapsed down towards the water, so if any of you are heading in the same direction please take care. We decided that once we had come up Brick Kiln Lock we would moor up for the day and we were glad we did as it started to rain jus after we had tied up.
Posted by Unknown at 07:19