On Sunday we went to The Junction pub for Sunday lunch and we both had the roast beef carvery and it was very good and we couldn't fault it, we had booked a table when we were in the pub on Friday evening and we were glad we had as it was very busy. We had sat outside the pub too on Saturday afternoon and there was a boat moored outside the pub and a woman got off with a parrot on her shoulder! 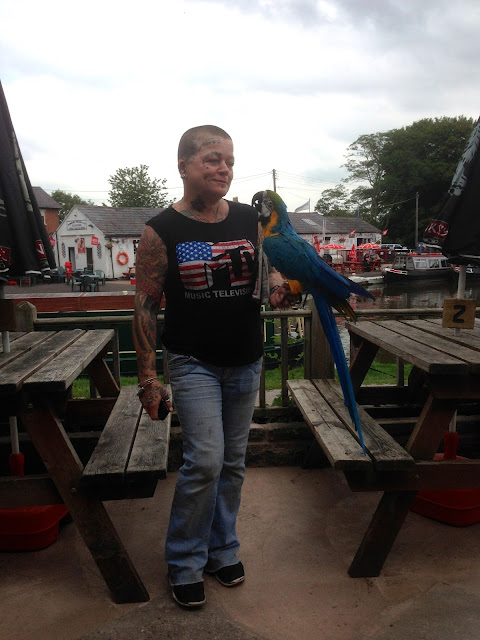 The parrot was very friendly and talked a lot too I think he was called George. 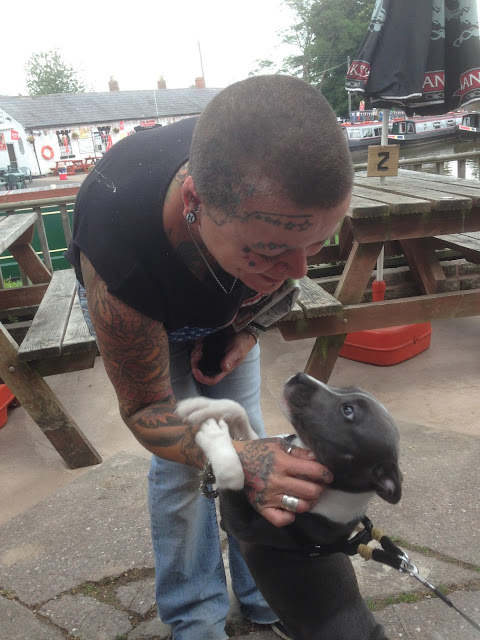 I have never seen a woman with so many tattoos! But she was very nice & Jaz liked her too!

On Saturday we could hear the music coming from the V Festival but couldn't make out what it was as we were too far away but it must have been loud as in Wheaton aston people said they could make out the songs clearly, mind you just after 5pm the heavens opened and it absolutely poured with rain and then along came the thunder & lightening so the poor people watching the bands would have got a real soaking!

After we had eaten our Sunday lunch we walked back to R&R and we then left Norbury Junction and had a short cruise to the Anchor pub and moored  a few yards away from the pub gate! Later on in the evening we went for couple of pints and got chatting to some caravanners and a boater too called Mal  who has a permanent mooring across the other side of the canal. We have met the boater a few times before he has been on TV  showing how he made rope on his narrowboat but that had been a few years ago now. 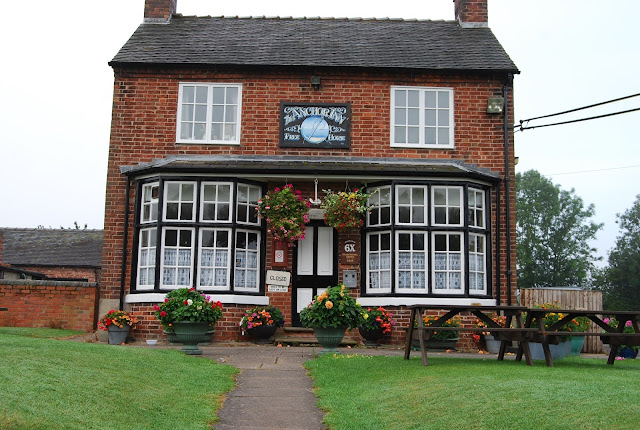 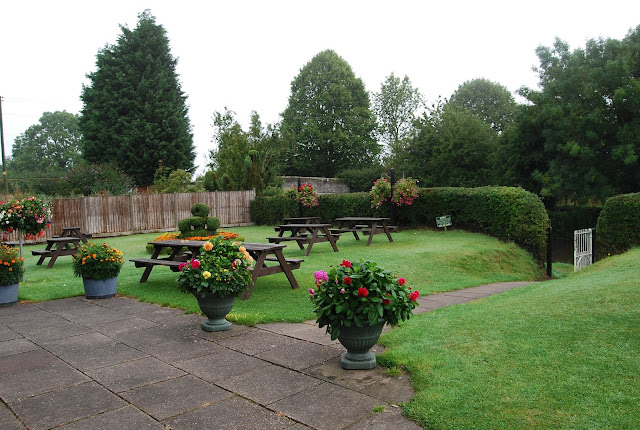 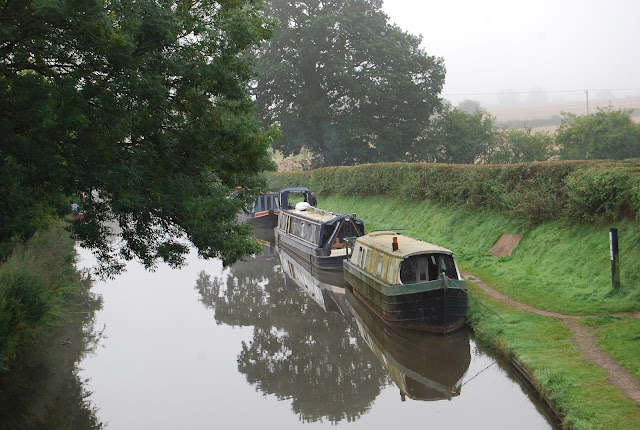 R&R moored outside the Anchor pub
This morning it was a bit misty when we got up but it wasn't long before it cleared and the morning was quite pleasant as we left our mooring about 8am. 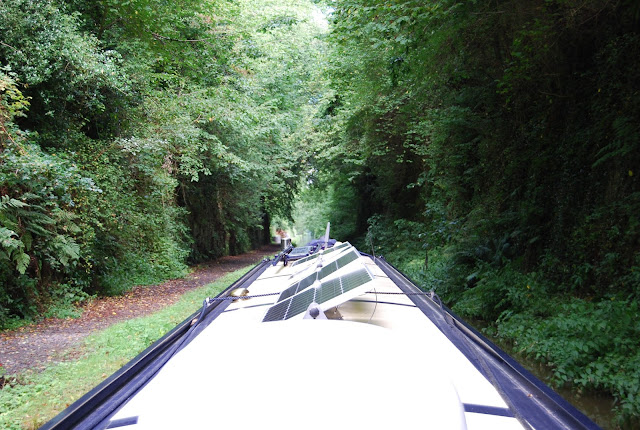 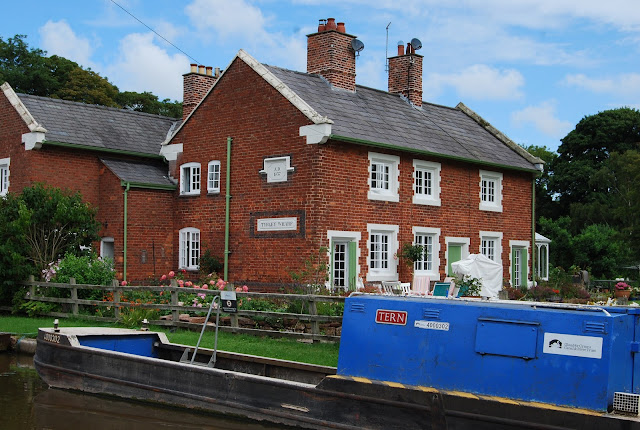 Looking across from the water point 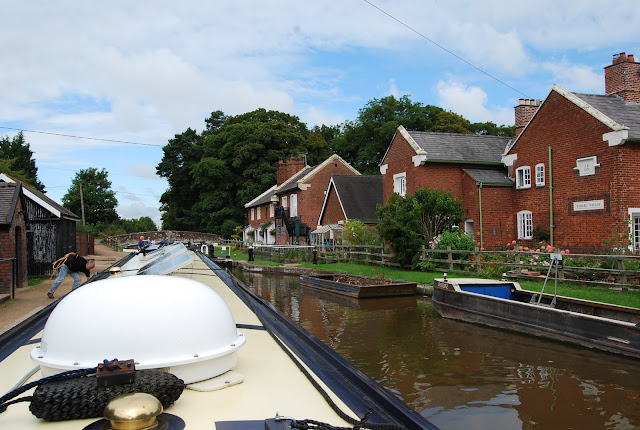 Looking towards the 1st lock 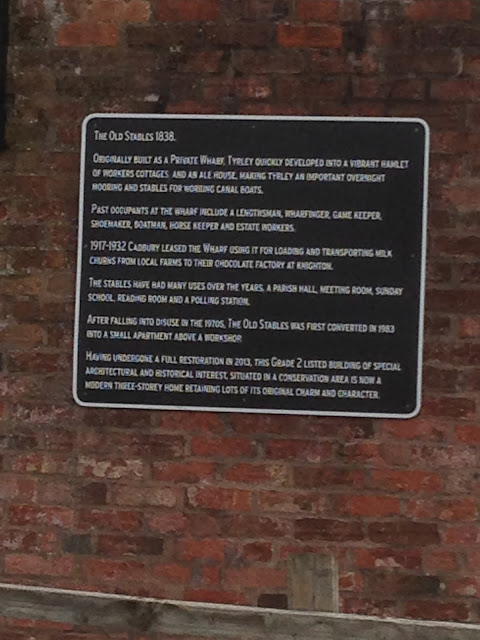 This plaque is on the building alongside the lock
There had been a boat going down ahead of us so we had to fill the next couple of locks as there were no boats coming up but they were quite quick to fill, there was a female volunteer lockie who had been at the top lock but she had gone down the flight to the bottom lock as we were leaving the 3rd lock Kev noticed that the boat ahead of us had left the bottom gates open and they were in the 5th lock going down so Kev was about to close them when the lockie signalled him to leave them open for a boat that would be coming up, Kev wondered why she was doing it, anyway I stayed with R&R and Kev was at the 4th lock waiting for the boat to enter and then I could see the boat was across the canal into the bushes and Kev came back to tell me that the reason the lockie had let them come up before us going down was because there was a very strong by wash before the entrance to the lock and she wanted the pound a bit emptier to try to help the boat get into the lock! This didn't work as it pushed the boat across into the bushes, Kev went to try to help and the boat managed to get back alongside the towpath side and tried once again to get into the lock and then the same thing happened yet again! Anyway with the lockie, Kev and the woman from the boat all taking the pole and the ropes they managed in the end to get him into the lock! What a performance we were there for almost an hour when we finally were down the 4th lock with Kev going out of the lock quite fast and keeping to the middle of the canal he was then into the last lock and we were on our way again! 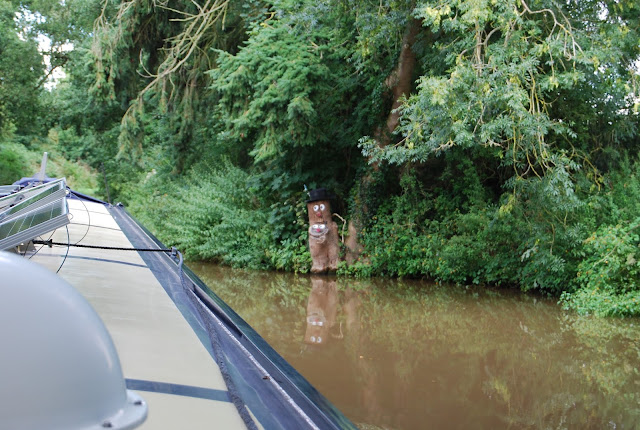 We passed a very happy tree!

Not far to go and we managed to get onto the visitor moorings at Market Drayton, after getting Jaz for a quick walk we then left her in her cage while we had a walk to get some shopping  and managed to get back aboard just as it started to rain although it was only light rain and stopped after about 20 minutes.