Back Aboard & onto the River Nene

Firstly I want to wish Kev's son Lee a happy birthday, who is at work offshore at the moment.
On Monday morning I arrived back at Gayton Junction & Kev met me with Jaz we were moored not far from Maffi on Nb Millie M and we stopped for a chat with him on the towpath. 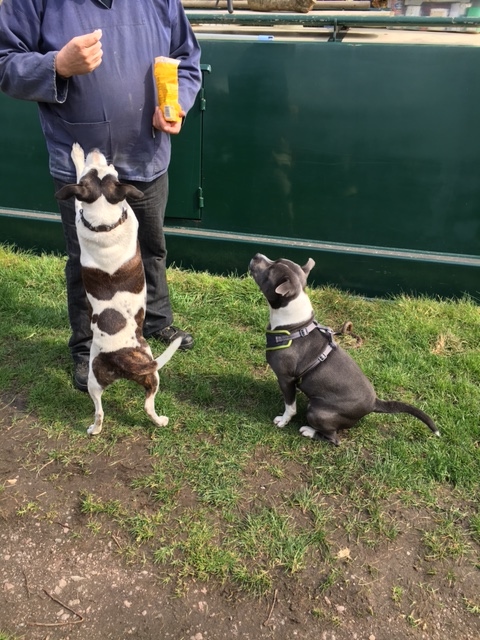 Kev took this photo but only got Molly & Jaz waiting for Maffi to give them a treat & not Maffi's head! Later on Kev & I took the hire car back to Northampton station and the girl from Enterprise car hire brought us back to Gayton.
On Tuesday morning we left our mooring about 8am, no sign of Maffi to say goodbye, we turned left at the junction onto the Northampton Arm and stopped at the services to fill the water tank, get rid of rubbish and empty the cassette. Once all of that was done we made our way to the first of the flight of 17 locks down to Northampton. 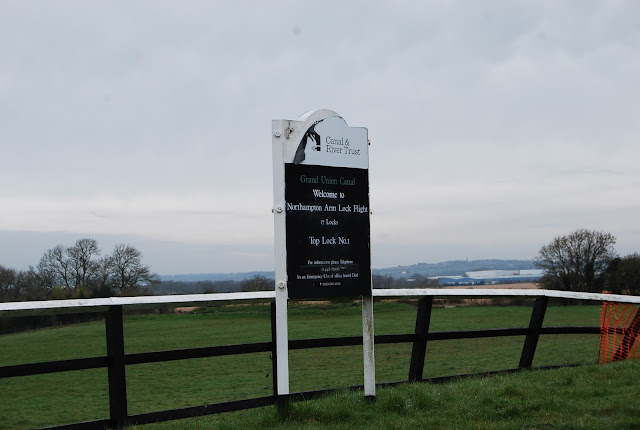 There was a couple on a smaller narrowboat towing a small cruiser ahead of us in the second lock and   the woman told Kev they were new to boating so she let us go ahead, so as we left a lock Kev set it for them, as we got a couple of locks ahead of them we decided not to set any more in case any boats came up. 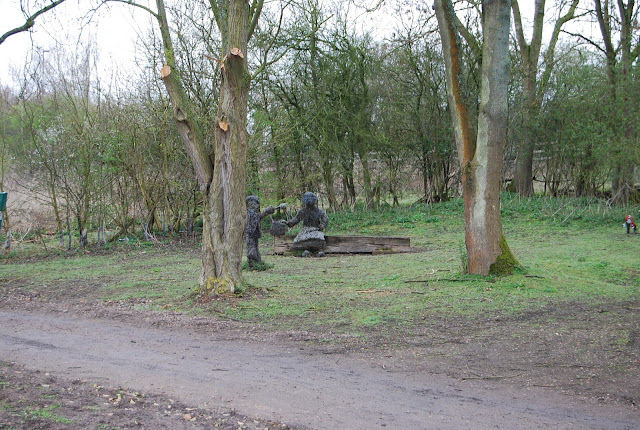 This sculpture of man & woman are beside one of the locks 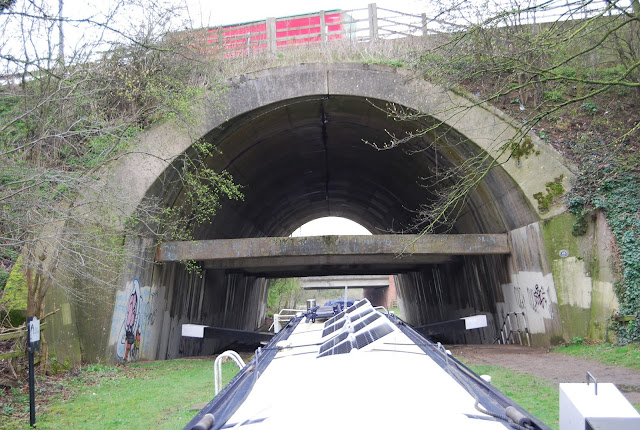 Plenty of graffiti on this bridge! 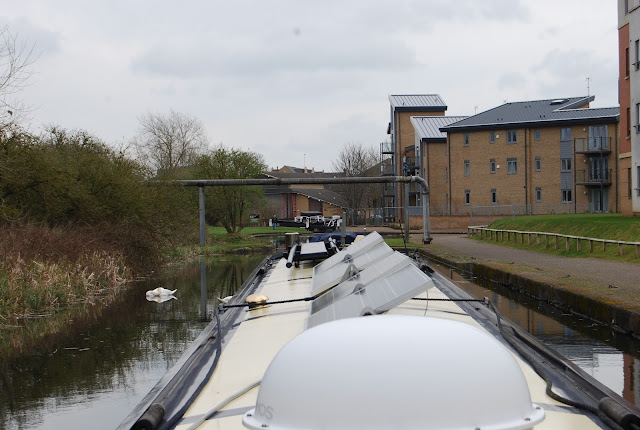 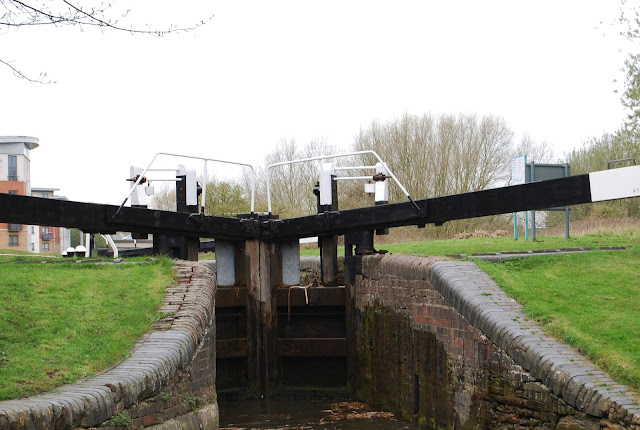 And out onto the River Nene! 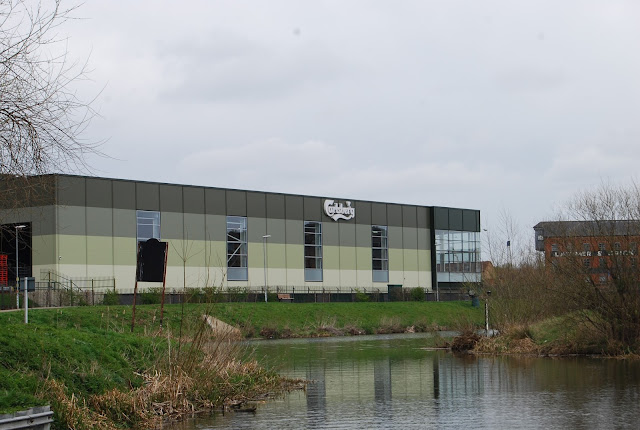 As we left the last lock this Carlsberg building faces us!
We didn't go too far before we moored close to a footbridge that Sue on Nb No Problem had wrote about on her information on the River Nene. There is a Morrisons close by so we could top up our groceries. We moored behind a boat called Lazy Daisy, Kev had met the man on this boat over the weekend while I was at home. His name is Tim and is a single hander so he said he would share some locks with us as we have never been on the Nene before. We wanted to go to the marina close by for a key for the locks but Tim had a spare one so we bought it from him. We had been into Gayton Marina before we left to buy one but they no longer sell them.
Once we had our shopping put away and had a bite to eat we the followed Tim to the first lock Beckets park lock which was just around the bend from where we were moored, there was a boat just about to leave so were able to go straight in, we then did the next 2 locks, Rush Mill Lock & Abington lock and then the sky was getting very black so we moored at the 48 hour moorings before Weston Favell Lock and just as both boats tied up the heavens opened and it rained very heavy. 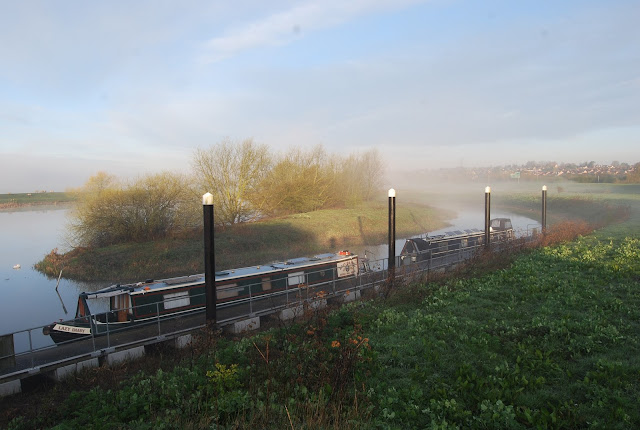 Kev had a walk this morning and took a few photos 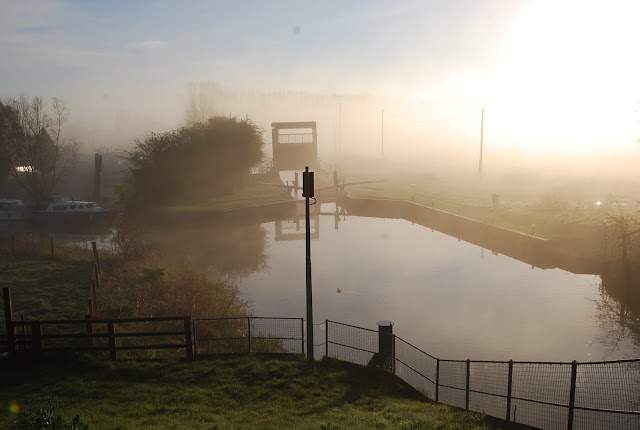 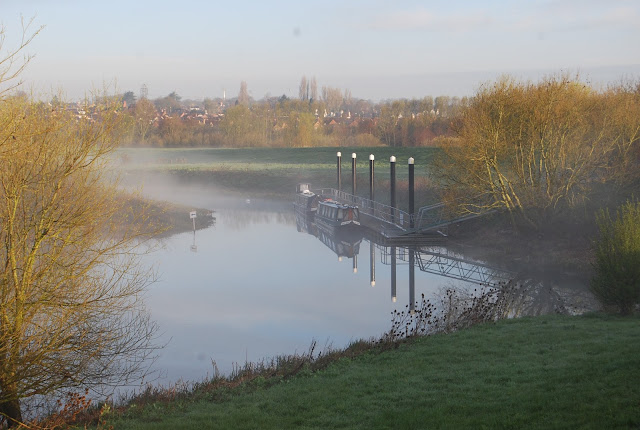 Looking down at the 2 boats, R&R at the rear 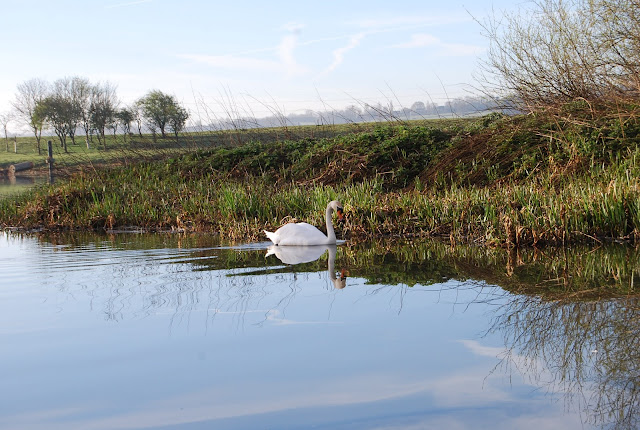 As the mist cleared we had a visit from this lone swan
Posted by Unknown at 01:18