On Saturday morning once we had breakfast & we were ready we moved across to the water point and topped up with water,  got rid of the rubbish & emptied the cassette, whilst we were there the man on the boat that we had been moored in front asked if he could come with us and share the locks,   we were very happy to have someone to share the double locks as it makes things a lot easier.
They were called Pete & Steph and their boat is called "Maggie May"they are liveaboards and haven't been around this area before, they have been liveaboards for about 3 years and were a really nice couple and easy to get along with. We had a lovely cruise with Steph & Pete and we moored after we had come down Kings Lock at Aylestone. I took Buster for a walk while Kev sorted the boat out, it was quite a nice afternoon and there are quite a few people walking along the towpath and a nice couple stopped to chat with us and they told us that apparently there had been a narrowboat set on fire in Leicester on Friday night! We wouldn't be mooring in Leicester anyway and planned to leave early on Sunday morning to get clear of the city. Anyway after we had finished chatting to the couple we  all went for a walk into Aylestone to get some shopping then popped into The Black Horse for a couple of beers. In the evening  Pete & Steph came onto Rock & Roll for a few drinks and we had a good natter and a nice evening. We told them we would be setting off early on Sunday morning and they wanted us to give them a knock as they would come with us, so yesterday morning we were up early as usual and it was another lovely morning and we all set off from Kings Lock about 6.45am! Not much chance of youths hanging about the locks at that time on a Sunday morning eh!! Anyway we got to the first lock and there were a few youths about but they were fishing! 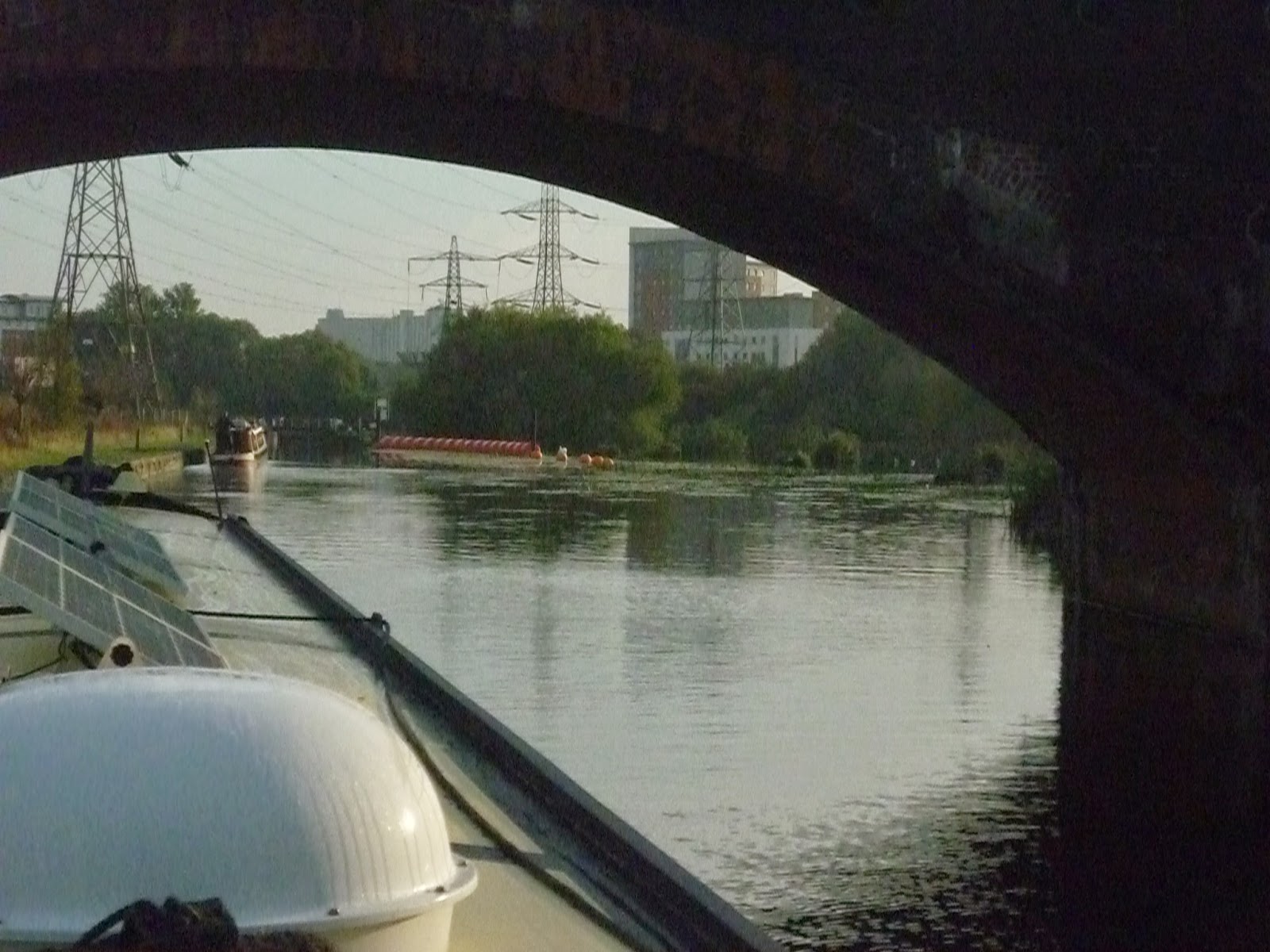 Maggie May is ahead ready to go into the lock opposite Leicester football ground. 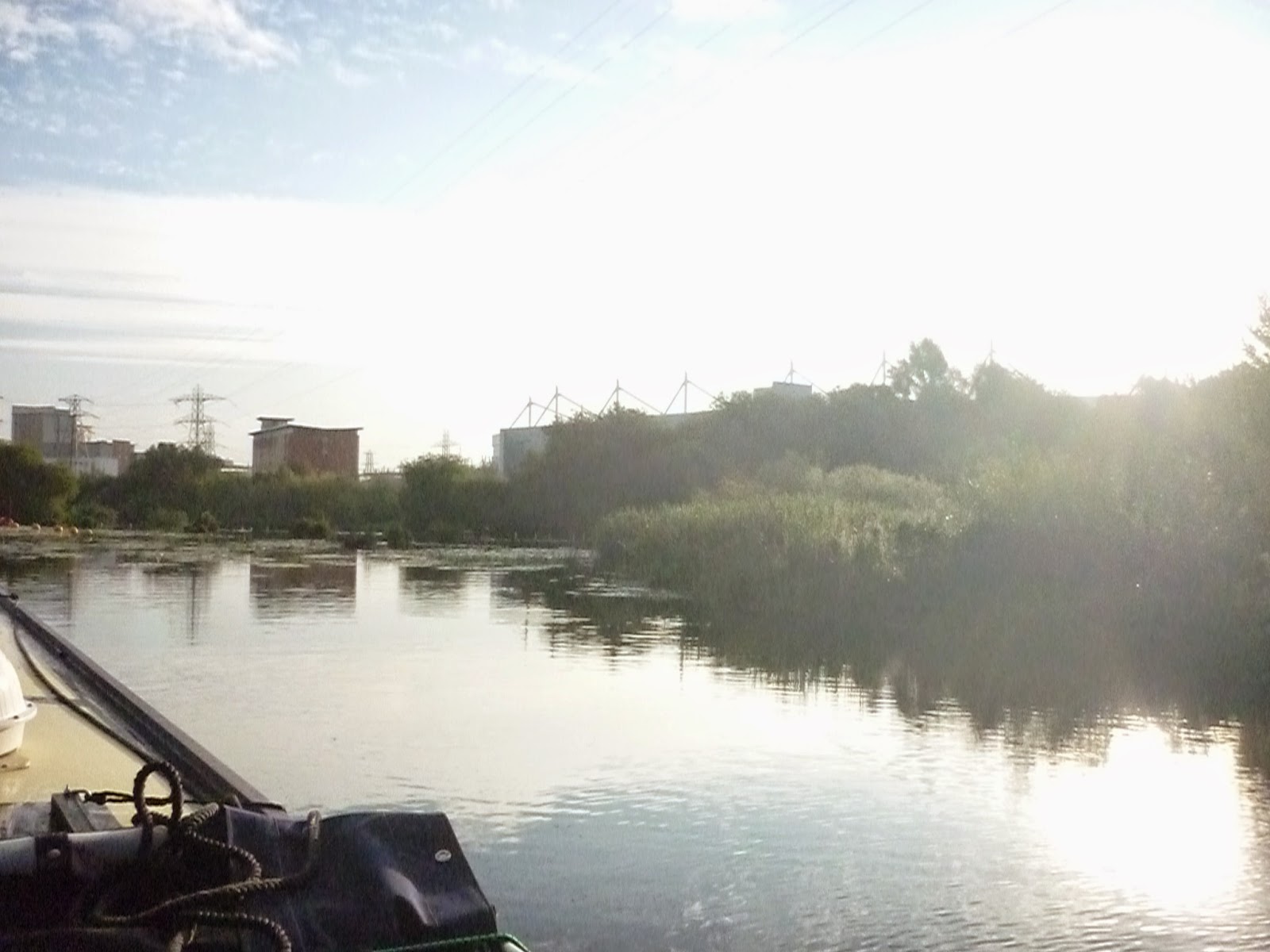 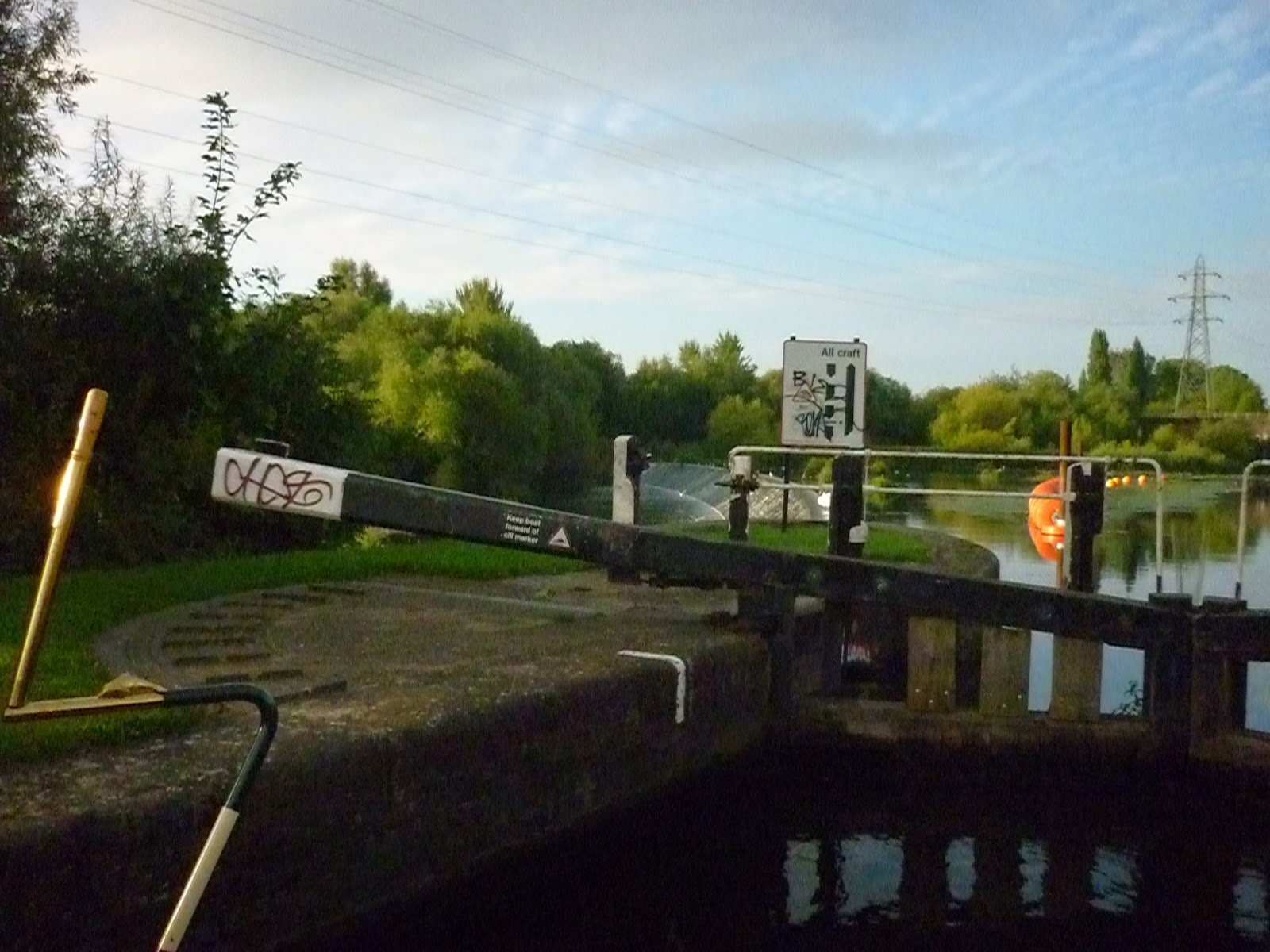 Inside the lock and a lovely sunny morning! 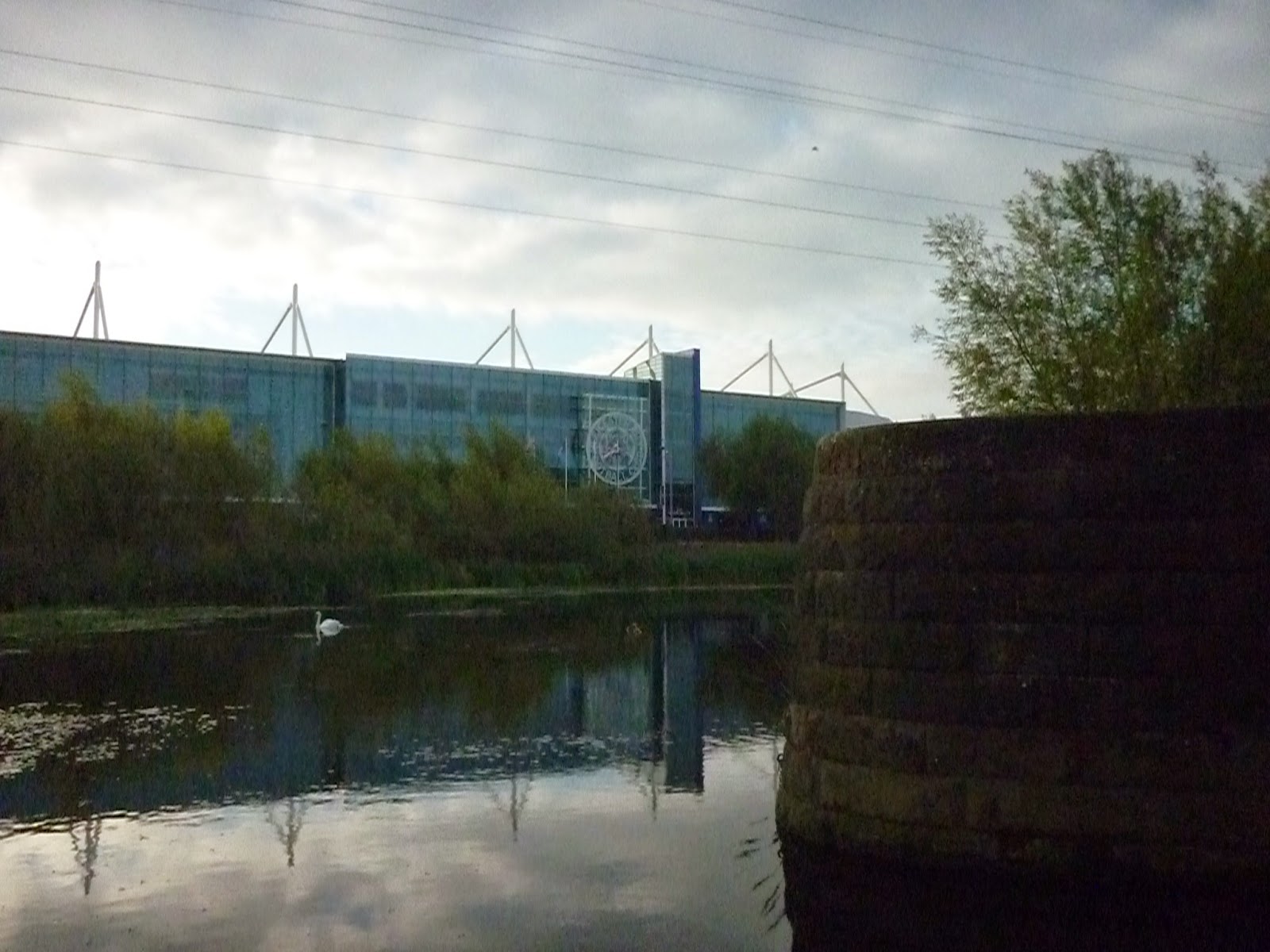 Leaving the lock with a quick snap of the football ground! 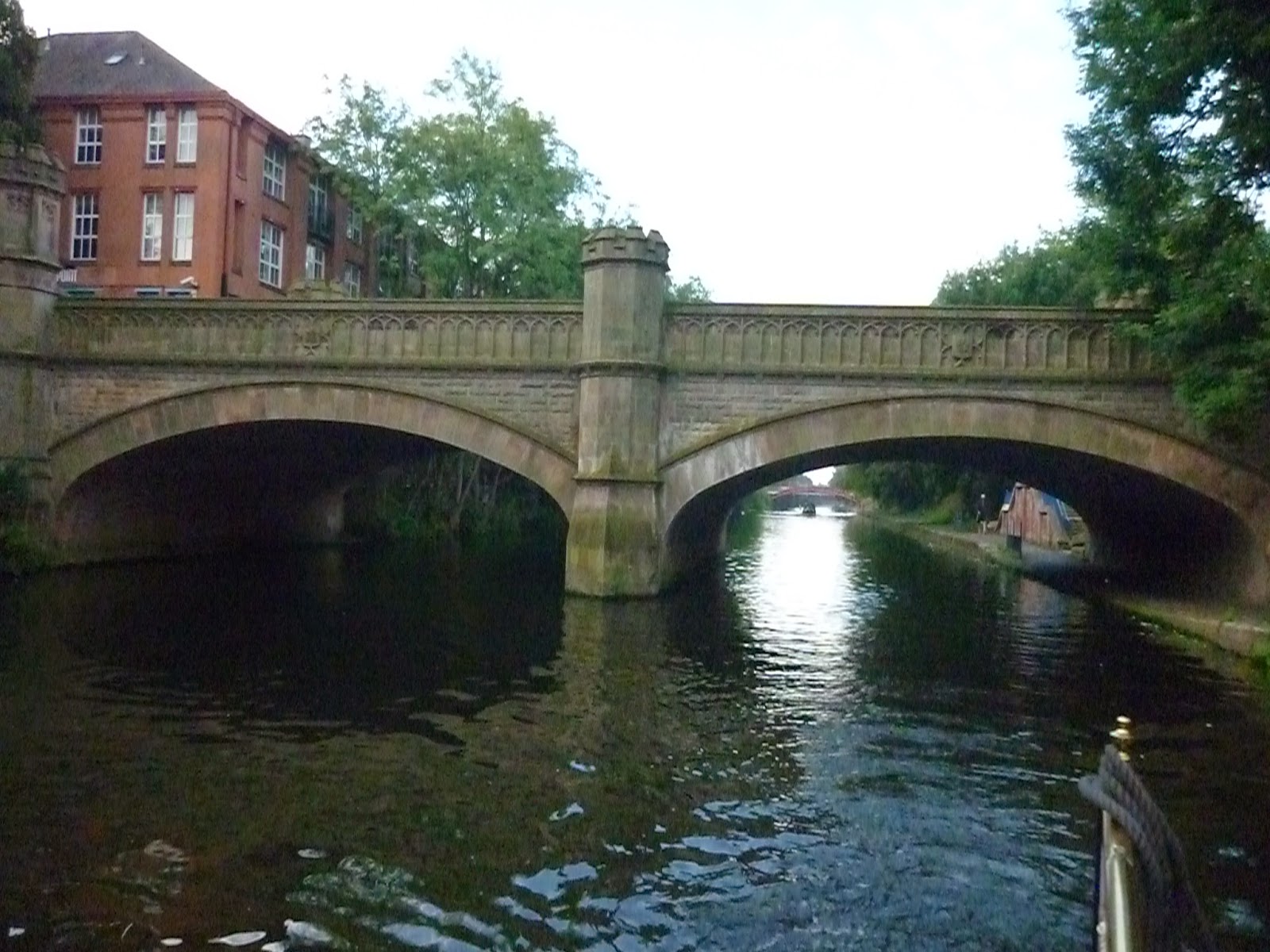 One of the bridges along the way through Leicester.
As we passed the secure visitor moorings at Castle Gardens there were a few boats moored there but no boats anywhere else along the way, plenty of rubbish about on the walkway though lots of empty beer cans, cider bottles and empty food boxes! Also plenty of rubbish in the water too!! Leicester seems to have plenty to offer but they are losing out to narrow boaters because of the lack of good police presence to deter the bad behaviour of the minority that can really spoil things, people we have spoken to around the area are lovely and all say that not many boaters want stop in Leicester because of this. We stopped at Sileby for fuel and the woman who served us also said the same thing she said even one of the men who has his boat moored at Sileby won't go through Leicester, but in saying all of this I am sure there are some boaters that have stayed in Leicester that have had no trouble whatsoever. Perhaps the fact that we haven't seen many boats along the way since Foxton is an indication that people are not coming through this way because of this problem but I hope I am wrong as it is a shame to not use these waterways.
As we stopped for fuel at Sileby Steph & Pete carried on to Mount Sorrel and we said we would catch up to them there if we could get moored as there were now a few boats around this area and as we arrived at Mount Sorrel we found they had manage to get moored at the visitor moorings before the lock close to the The Waterside pub but there wasn't many moorings there and so we had to breast up with Maggie May, but due to the fact that Buster would struggle to get on & off the boat Pete pulled out from the mooring to let us get alongside and he went on the outside as their 2 dogs could jump across from his boat over ours & onto the walkway ok, they are a lot younger than Buster!
Steph & I got the chairs out and sat outside with a drink while Kev & Pete went to the pub for theirs! The pub was busy and plenty of people about sitting in the sun at the pub and walking passed us having a look a the boats, there were plenty of small day boats with people having a great time. Later on when Pete & Kev came back we all popped back to the pub for a bite to eat.
Posted by Unknown at 20:40