About turn & meeting another boat

Tuesday 14th June
On Sunday the weather wasn't great, so Kev took the opportunity to do some engine maintenance, he changed the belt for the travel power generator and after he had finished and put his tools away and the boards back down on the engine bay he realised that the engine was almost due for an oil change! So he decided they he would do it another day! George & Carol invited us onto Still Rockin for a few drinks in the afternoon and we had a nice couple of hours chatting. We all arranged what we were going to do the next morning as we were turning round to head back to Chertsey Meads to meet up with Geoff & Mags on Nb Seyella on Tuesday. George & Carol said that as both our boats wanted water & cassette emptying that they would fill with water at the water point not far from the moorings we were on in Windsor and we would go up to Boveney lock to fill with water & empty our cassettes & then they would follow to empty theirs.
Yeterday morning we were ready for the off a boat 8am and left George & Carol getting ready to leave too. 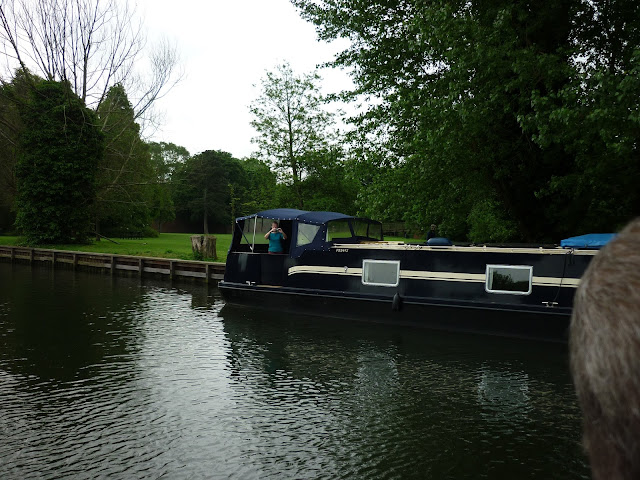 We both got the camera out at the same time! 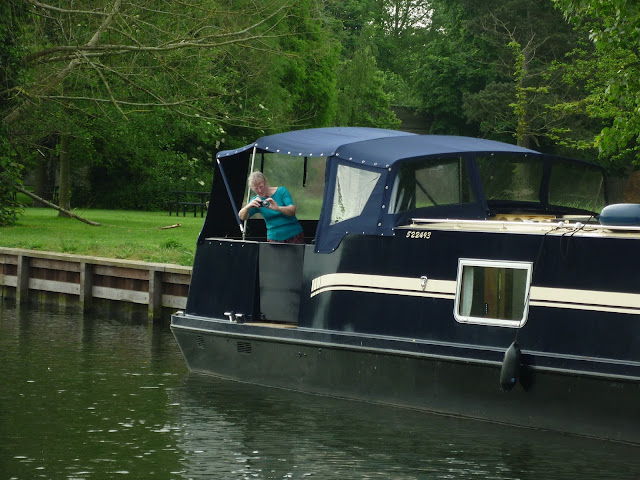 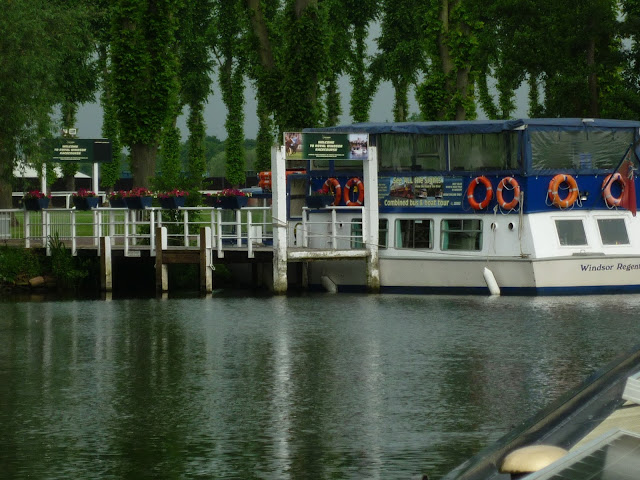 Passing Windsor racecourse
It wasn't far to Boveney lock and we pulled onto the elsan emptying point, Kev went over with 2 cassettes but he came back & said that the door was locked and he had tried his BW key and it didn't fit! There was no sign of a lock keeper to ask about it so we pulled across to the water point and then we went back across to the elsan point to wait for George & Carol. They were soon coming towards us... 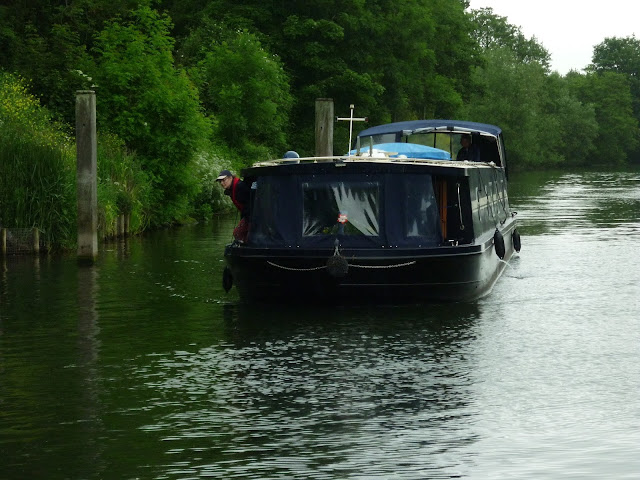 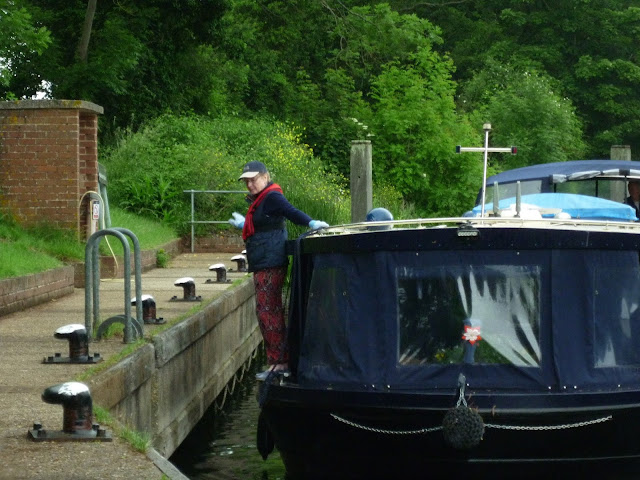 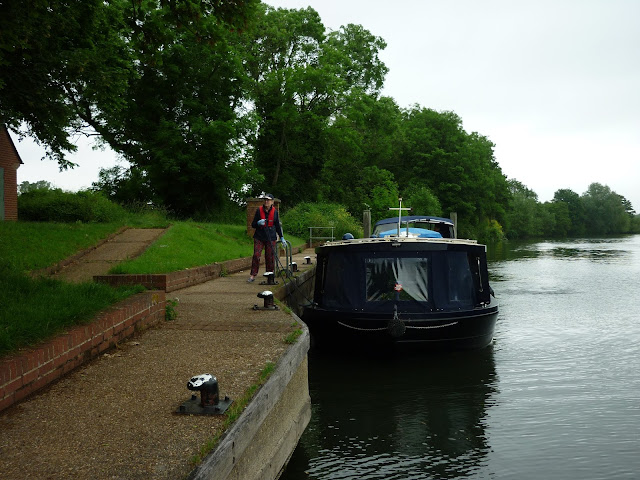 George then went over to the elsan point to try the door, he opened it straight away and so it wasn't locked at all! A bit of a laugh at this point at Kev's expense!
Once all cassettes were sorted George & Carol set off first turning back towards Windsor. 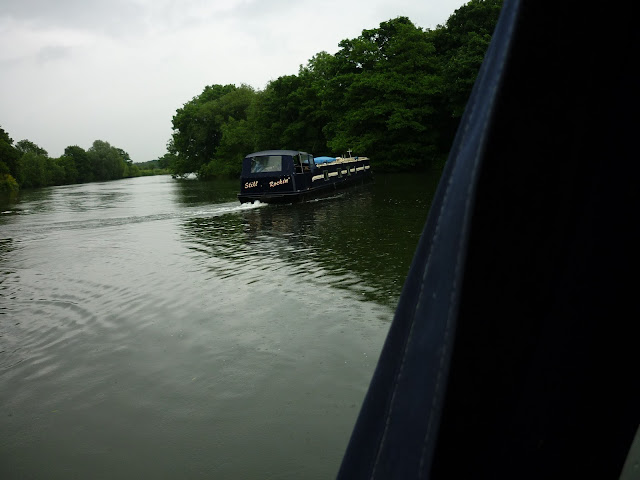 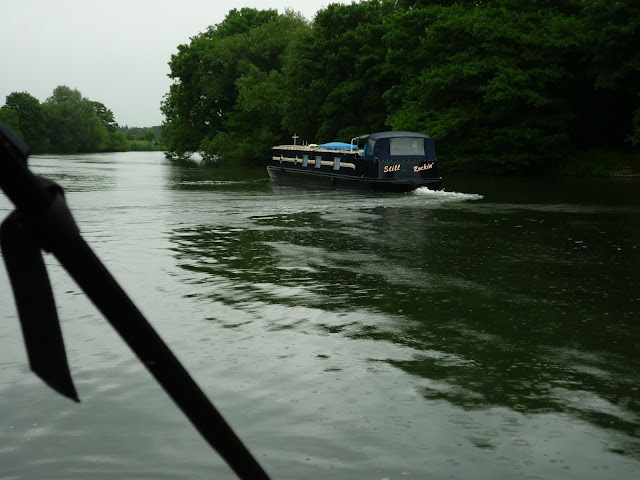 We are now following 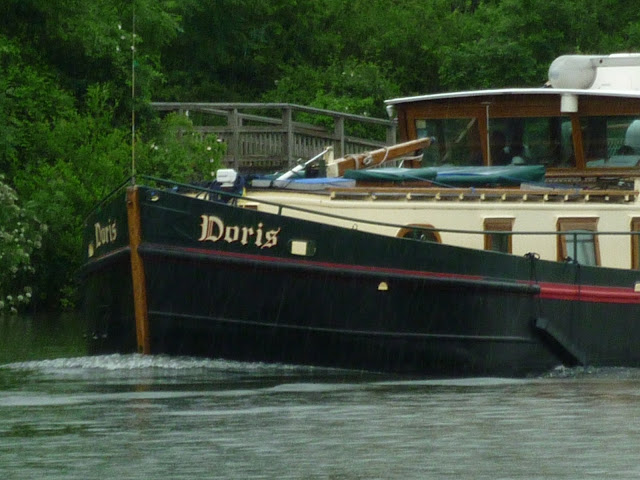 Had to take this photo. My Mam is called Doris. 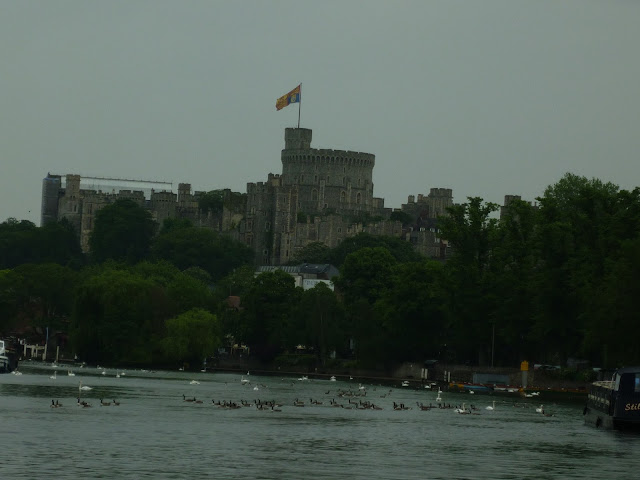 Another view of Windsor Castle 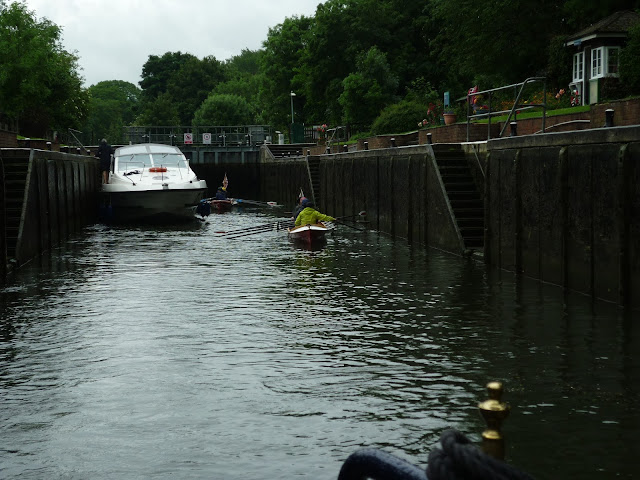 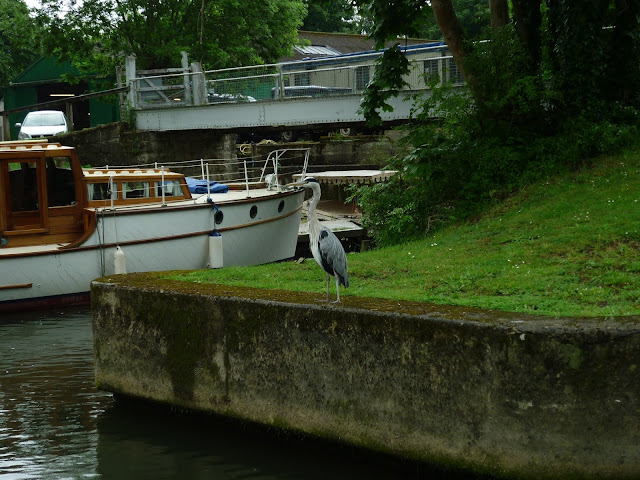 A lookout posted at the lock 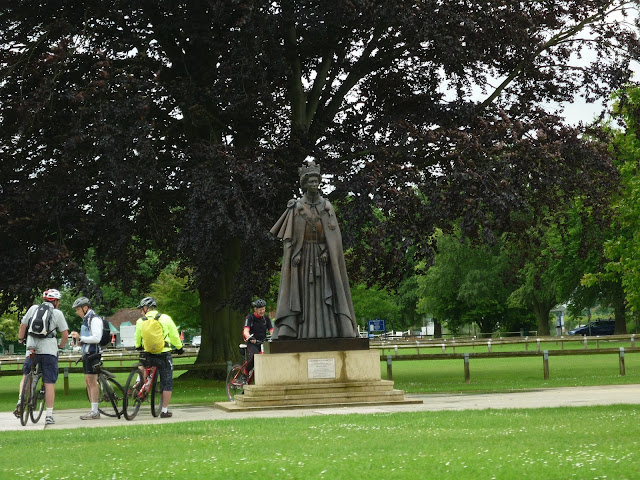 A good statue of the Queen 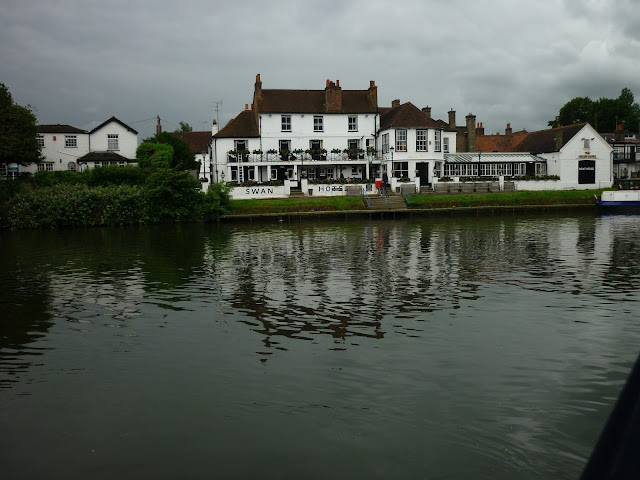 The Swan Hotel
When we were through Staines bridge both boats turned to face upstream to moor opposite the Swan Hotel. Kev & I went with Carol for a walk into Staines shopping centre, while George stayed on board Still Rockin with Molly. There are quite a lot of shops and while carol went off on her own we headed to Waitrose for a few bits of shopping.
This morning we were way from our moorings about 8.30 am and as we were approaching Penton Hook Lock there was a boat already at the lock, there was a divers warning notice. The divers have been carrying out a yearly inspection of the lock chamber. 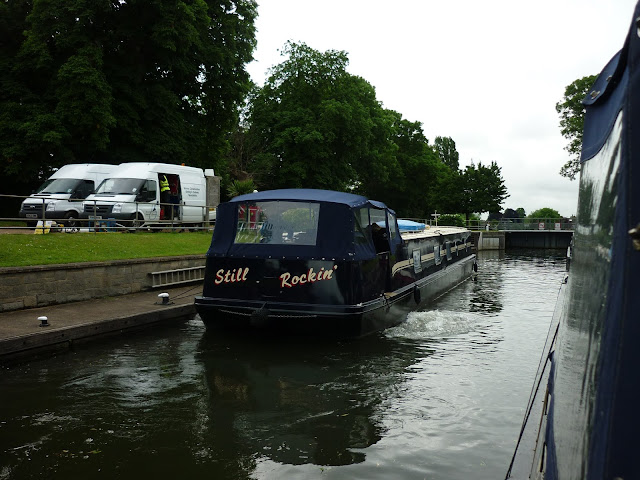 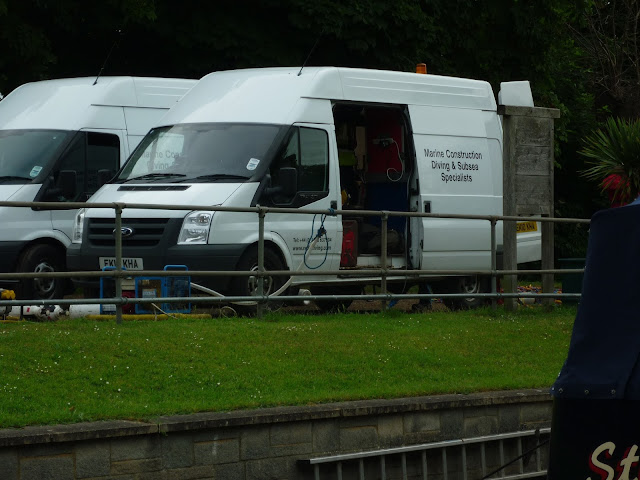 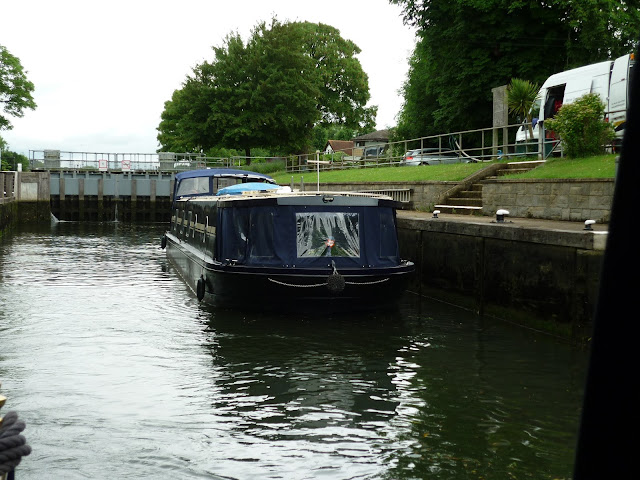 Still Rockin following us this time 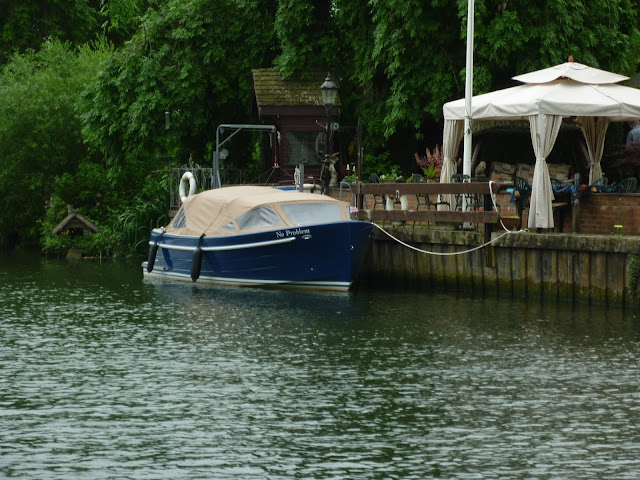 Whoops! No Problem has shrunk!

We were soon at Chertsey Mead moorings, there was already a widebeam moored there but still plenty of room for us and room for Seyella to get moored too! We had only been moored for about 20 minutes before Geoff & Mags came alongside and moored. 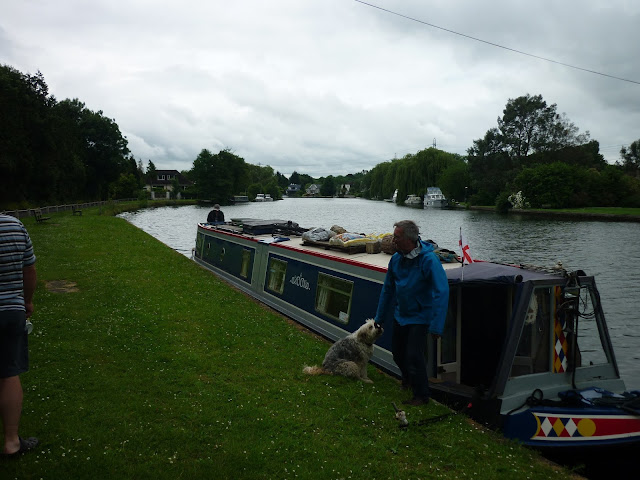 George had helped Geoff moor up 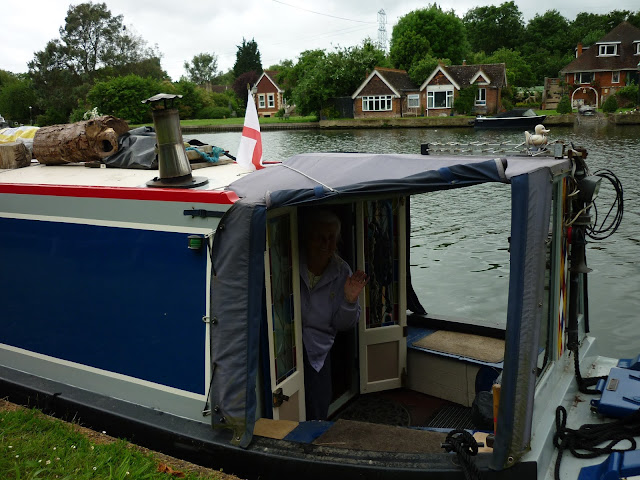 A smiling Mags as usual.
Carol & George invited everyone aboard still Rockin at noon, but before we went Kev managed to do the oil change he had forgotten to do when he changed the belt on the travel power.  When we got aboard Still Rockin Geoff, Mags & Meg were already being given the tour around as they too hadn't seen Still Rockin. We were treated to some lovely cakes, Carol had made a ginger cake & a Lemon Drizzle cake & Geoff had made a lovely Lemon sponge cake yummy they were too!