Our little flotilla is on the move

Thursday 16th June
On Tuesday evening George & Carol invited Mags, Geoff, Kev & myself onto Still Rockin for a few glasses of wine, it was a really good night & thoroughly enjoyable thanks to all the good company involved. We didn't leave until late but we weren't rowdy! 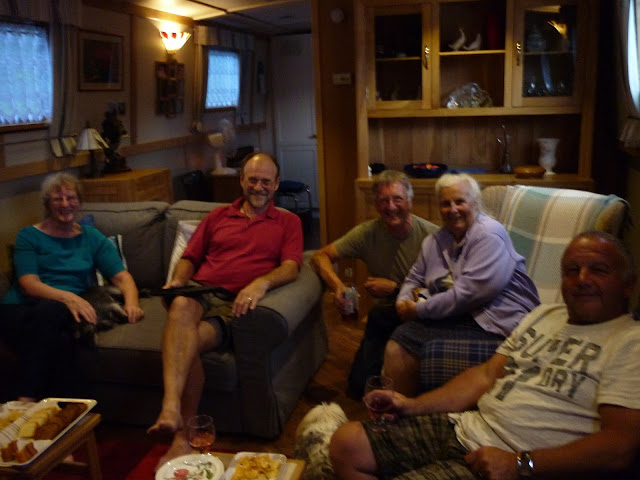 I took this one^ 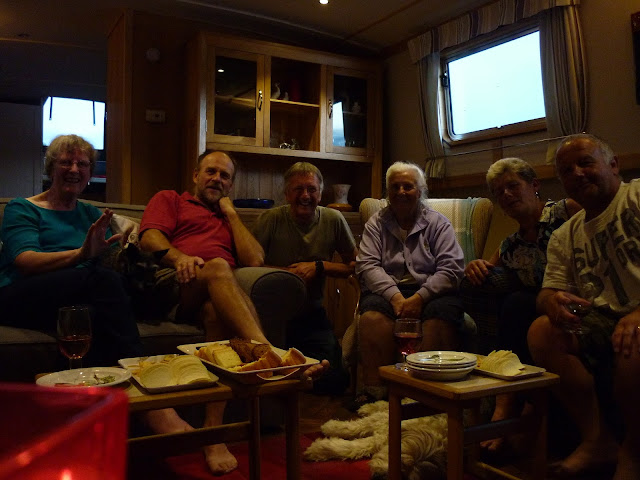 Then George managed to set our camera on a timer & got this photo ^
Yesterday we all stayed put, I did some cleaning in the morning. In the afternoon Geoff invited us all for tea & cup cakes! The cup cakes he had made earlier & I can vouch for him making them as I did see him with his mixer in hand when I popped to see Mags for a chat!  Just after 12.30pm  the fuel boat arrived and all 3 boats topped up with diesel @ 84pence per litre. 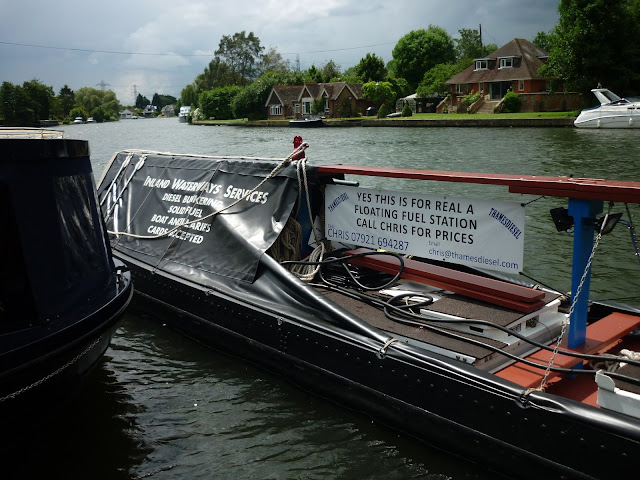 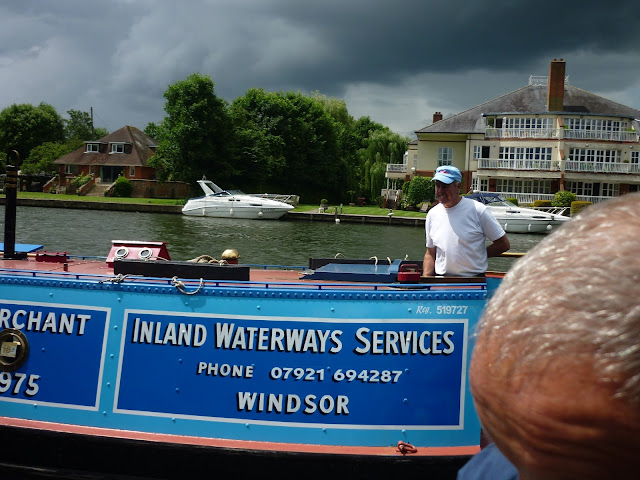 About 3.30pm George, Carol, Kev & myself went aboard Nb Seyella. I must admit Kev & I are putting weight on with all this home baking going on, but we can't resist! Later on George & Carol left & then Kev Took Jaz for a walk with Geoff & Meg while I stayed behind with Mags for a game of Scrabble, but we never managed to finish the game as we ended up chatting too much so by the time Geoff returned with Meg we decided to give up!
This morning we left Chertsey Meads about 8.30am leaving Wb Still Rockin & Nb Seyella behind and headed for Chertsey lock to fill with water, they would be following soon after us giving us chance to fill before they arrived to fill both their boats with water too. 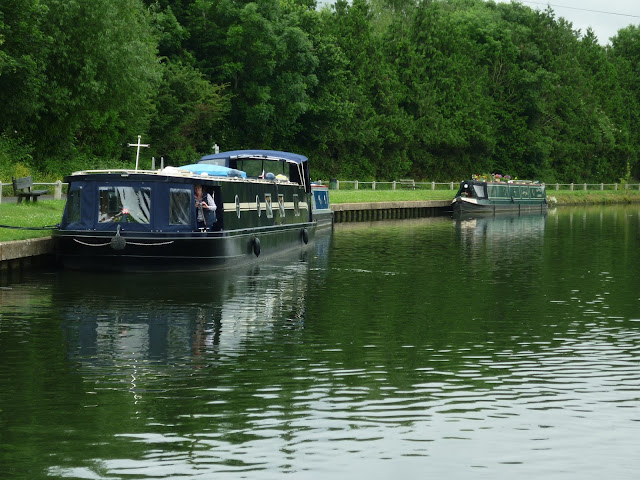 Leaving the rest of the flotilla behind! 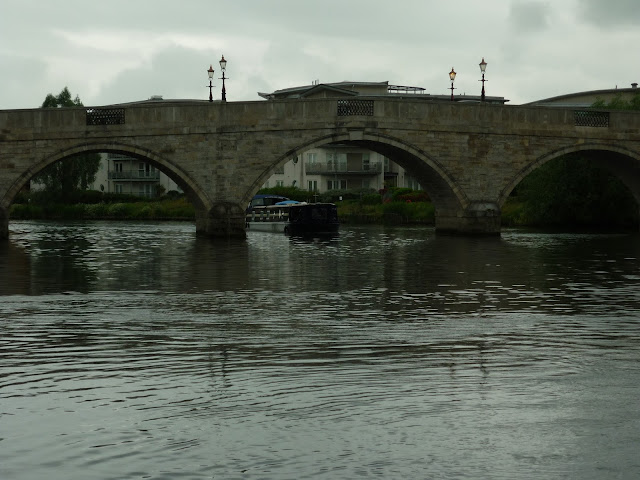 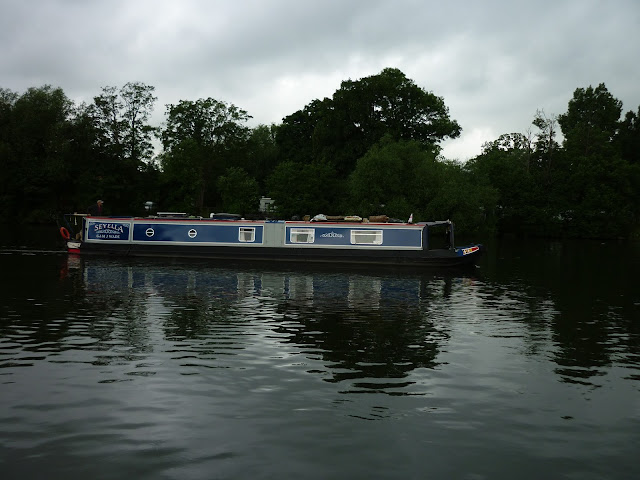 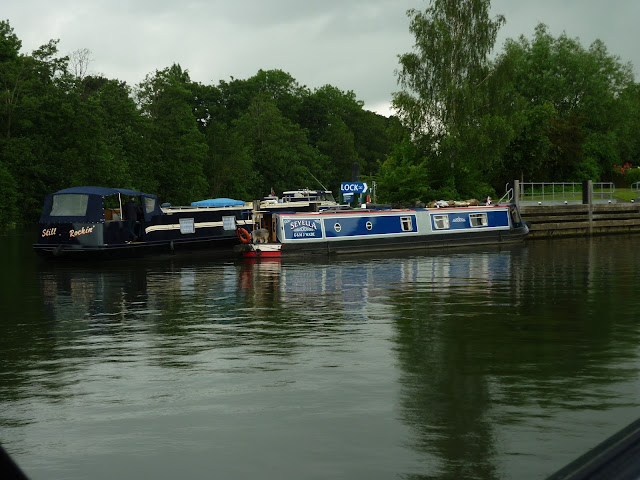 Both boats at either side of the water point
Once all 3 boats were full of water I went to get the lock ready as it was a self service lock with no lock keeper on duty. When we were approaching the next lock which was Penton Hook Lock there was a lock keeper on duty & so the gates were open for us all to go straight in. When we got to the moorings at the Slug & Lettuce pub in Staines, all 3 boats moored for shopping, geoff also had to pop to the Argos store to pick up a parcel he had ordered on Ebay, apparently if you order something on Ebay you can have it delivered to an Argos store and then pick it up yourself. Just after 1pm we all left Staines and headed for the lovely moorings at Runnymede.
Posted by Unknown at 07:47